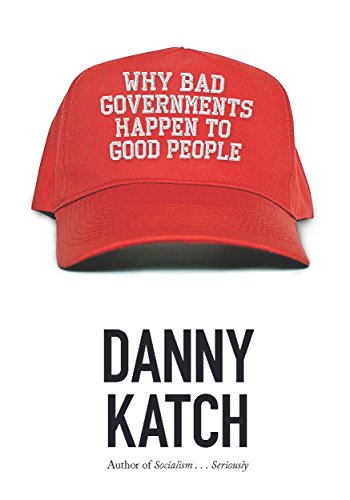 The situation in the United States serves as the starting point for an in-depth discussion about why bad governments happen to good people. But author Danny Katch doesn’t insult the intelligence of the reader by suggesting that “bad government” only began with the election of Donald Trump to the presidency.  Indeed, the deadly combination of democracy and capitalism, which causes a perversion of the former, is not new in the U.S.

While U.S. government officials laud the wonders of democracy, Katch exposes it for the sham that it is. “. . . our democracy consists of a division of labor between the rich and the rest of us: we get to experience the civic pageantry of pulling a lever in a voting booth, and they get to make the actual decisions.”

The farce of voting as an indicator of democracy is clear. Katch quotes political scientists Martin Gilens and Benjamin I. Page, who, after studying thousands of policy decisions, said this: “When the preferences of economic elites and the stands of organized interest groups are controlled for, the preference of the average American appears to have only a minuscule, near-zero, statistically non-significant impact upon public policy.”

The book is about far more than current or even recent problems with governance in the U.S; Katch defines what democracy actually means and explains how far the U.S. is from it. He discusses the popularity of the campaign of Vermont Senator Bernie Sanders, a self-proclaimed socialist, and sees some hope in that popularity, especially among the young.

But he also stresses that elections are not enough: trading one small group of people who make decisions in their own best interests, as they disregard the will of the people who elected them, for another such group representing a different party, will result in no real change. And real change is what is required.

That level of change, he asserts, has only happened twice in U.S. history. The first time was during the presidency of Franklin D. Roosevelt and the New Deal in the 1930s, and the second was Lyndon Johnson’s Great Society, 30 years later. These advances, Katch says, did not come about “because a bunch of lefties ran as down-ballot candidates and slowly took over the party from within, but because massive protest movements—sit-down strikes in the ‘30s and urban rebellions in the ’60s—forced formerly moderate Democrats to shift hard to the left.”

Today, Democratic Party leaders are taking about unity in order to regain control of the House of Representatives and Senate in next year’s elections. Katch posits that this does not represent change: “This call for unity is about muffling the discussions about what it is we are going to be for.” Once again, seeking redress in the Democratic Party from the ills that the nation faces will only result in more of the same.

The problem, put succinctly in this book, is simply that capitalism doesn’t work. It is the exploitation of everybody else by the rich, who successfully convince the masses, somehow, that those who live in their mansions and spend time on their yachts know what is best for everyone else.

The author doesn’t leave the reader without specific recommendations. “The lesson for us to draw is not that revolutions shouldn’t happen—because they will—but that they have to go beyond replacing unjust regimes to replacing the undemocratic capitalist structures that put those regimes in power.”

Why Bad Governments Happen to Good People is a fairly short but very informative book not only about what causes bad governments, but also how good people can change them. For those who have long tried to put their finger on what is wrong with the U.S. government, and those who really weren’t paying much attention until Trump was elected, this book is of vital importance.