The Pentagon's Wars: The Military's Undeclared War Against America's Presidents 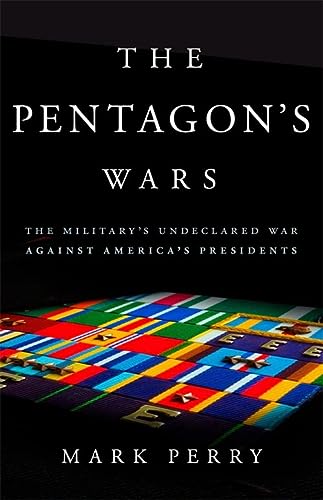 Among the many myths that the United States government seems to enjoy perpetrating on its citizens is one of the military and civilian branches of government working together in harmony for the good of the country and the world. Presidents, we are told, surround themselves with highly-qualified military leaders, and together they strategize, and then the military performs the tactical duties to bring those strategies to fruition.

Coupled with this fairy tale are the two related myths of governmental transparency and an independent press. The press, it is purported, reports on the government so the people of the country know how their elected officials are proceeding with the care of their welfare.

In his latest book, The Pentagon’s Wars: The Military’s Undeclared War Against America’s Presidents, Mark Perry explodes those myths with the precision of a laser-directed drone, shattering the façade of military leaders serving the people, and of commanders-in-chief of being in charge of the military.

He argues that, at least since the end of the Cold War, U.S. militarism has been conducted by egotistical career military men, whose main focus has been advancing their careers and ensuring their place in history.

They often hold in contempt the president of the United States, under whom they work and to whom they report, yet they seldom, if ever, contradict him. One example, among countless available, will suffice. At a major awards banquet in the Netherlands during the administration of President Bill Clinton, General Harold Campbell called the president, a “womanizing, pot-smoking, gay-loving draft dodger.” That statement made headlines and Campbell was fined and forced to retire as a result. Yet many similar statements by leading military figures go unreported.

Perry quotes an unnamed general, speaking about Donald Rumsfeld, Secretary of Defense under President George Bush and the author and manager of the disastrous war in Iraq. This general said that Rumsfeld “idolized (Winston) Churchill. He was thinking about his legacy the whole time. I think he envisioned some future historian talking about how Don Rumsfeld was America’s Churchill.”

Temper tantrums thrown by men who held the power of life and death over millions are detailed, along with their skewed priorities. General Tommy Franks, another key player in the ill-advised Iraqi war, was once visiting Qatar, to check in at CENTCOM (U.S. Central Command) headquarters there. Perry reports that “Franks was given a suite at the Sheraton. Unfortunately for his military assistant, it wasn’t the best or largest suite at the hotel, which had been reserved for a visiting dignitary. Franks was enraged, and dressed down his military assistant in the hotel lobby. Franks was out of control: ‘Don’t ever let this happen again,’ he yelled, ‘or I’ll bust you all the way to private.’ That was ‘standard operating procedure for Tommy Franks,’ a retired Army office who saw the incident said.”

Shortly after Admiral Michael Mullen was appointed Chief of Naval Operations under President George Bush, he told reporters that he wanted to “fix” the army and achieve success in Iraq and Afghanistan. But his first order of business was the redesign of his office, involving moving walls, building a desk to his specifications, and spending tens of thousands of taxpayer dollars while U.S. soldiers and Iraq and Afghani soldiers and civilians died. His aides feared that the press would learn of this needless expenditure, and report it; that never happened.

The missteps in many of the U.S.’s imperial misadventures since the end of the Cold War are chronicled with chilling analysis. In discussing the first U.S. war against Iraq, to remove Iraq from occupying Kuwait, Perry says this: “[t]he United states had gained international support for expelling Saddam’s legions from Kuwait, and no more. That is true, but also implies a choice—and the choice was to maintain a coalition while tens of thousands were slaughtered. So we stopped that war, saved the coalition, maintained the trust of the international community —and failed the innocent and the oppressed, the thousands of men and women who heeded our call to rise up and overthrow a monster. Yet, inexplicably, we somehow assumed that years later, these same people would strew flowers in our paths as we rode our tanks through their towns.”

Perry argues that both member of the military and ordinary citizens deserve better, but based on trends over a 30-year period, the possibility of any major change is not great.

The Pentagon’s Wars: The Military’s Undeclared War Against America’s Presidents, is carefully documented, and an important contribution to understanding why the U.S. continually causes so much suffering around the world, with little in the way of positive accomplishment to show for it.