The First Bridge Too Far: The Battle of Primosole Bridge 1943 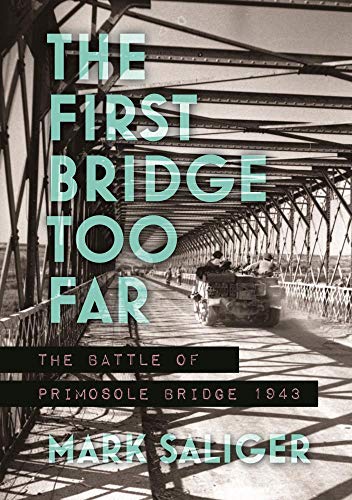 A year before the more famous “bridge too far” at Arnhem in The Netherlands, the “Red Devils” of the British Parachute Regiment traded blows with the “Green Devils” of the German Fallschirmjaeger (paratroopers). Both of these elite forces had their eyes on the same prize: the small, almost inconsequential Primosole Bridge in Sicily. For several days in the scorching summer of 1943, a small contingent of British paratroopers managed to hold the bridge despite facing larger and better-equipped Axis forces.

Author and former British paratrooper Mark Saliger is heavy on the details in The First Bridge Too Far. The first half of this slim history focuses on the men, their equipment, and all of the planning that went into the combat drops executed near Primosole Bridge. Readers learn every detail about both Parachute Regiment and their German enemies.

Time is spent on discussing the Sten submachine guns favored by the British, the types of uniforms and kit used during the battle, and how the battle for Primosole Bridge fit into the more complex actions of Operation Husky. For those unaware, Husky was the combined American, British, and Canadian invasion of Sicily. The operation came immediately after the Royal Italian Army and the much-vaunted German Afrika Korps were kicked out of North Africa, and the goal of Husky was to open up a second front in Europe in order to aid the besieged Soviets Red Army.

The British Paras, who had already been bloodied in Egypt, Libya, and Tunisia, were tasked with taking Primosole Bridge ahead of General Bernard Montgomery’s planned assault on Messina. Specifically, by taking and holding the bridge, the Paras would help Montie’s Eighth Army to capture the all-important Catania plain.

As Saliger notes, things started to go bad almost immediately. The American pilots tasked with delivering the Paras to their drop zones had previously flown transport aircraft, and as a result many of them turned around and flew back to Tunisia after receiving enemy flak. Those American pilots who braved the anti-aircraft guns scattered the British paratroopers and their gear all over Sicily.

When the Paras finally faced off against the Germans and Italians, they did so with less ammunition, less fire support, and less artillery than their foes. Yet through it all the exhausted and dehydrated Red Devils held on until the very last minute. It was the bravery and guts of the Paras that allowed the Durham Light Infantry and their Sherman tanks to deliver the coup-de-grace against the Germans at Primosole Bridge.

One of the surprises of The First Bridge Too Far is the revelation that the British and Germans paratroopers treated each other chivalrously. For example, Corporal Ashley Neville went from firing his Bren light machine gun at the Germans to racing headfirst into the melée in order to save two wounded Germans from being burned alive. Such was the “healthy respect that the Green and Red Devils held for each other on the battlefield.” For his actions, Corporal Neville was awarded the Military Medal. Saliger also notes that the German paratroopers refused to fire at their British peers after they deployed their parachutes.

The First Bridge Too Far is a harrowing portrayal of an unwinnable battle. The Paras proved their mettle, but ultimately the battle for Primosole Bridge was a glorious failure. The stiff resistance put up by the Germans and Italians at the bridge and throughout Sicily hampered the Allied desire to deliver a death blow to the Axis. The battle-hardened Axis veterans of Sicily would fight on in Italy, while the British Paras would experience the horrors of Primosole Bridge on a larger scale during the botched Operation Market Garden of 1944.

Operation Husky proved to be somewhat humbling for the British, as General George Patton and his Seventh US Army reached Messina first. Saliger ends his history by stating that it was Patton’s success in Sicily that changed the dynamics of the Anglo-American alliance in the European Theater. After 1943, the Americans were the senior partners, even though the British had been at war since 1939.