Seeing Further: The Story of Science, Discovery, and the Genius of the Royal Society by Bill Bryson (2011-11-08) 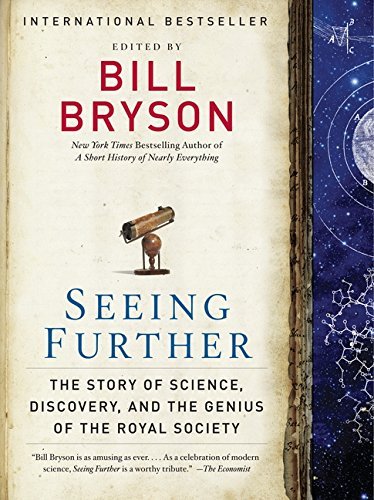 Bill Bryson provides the introduction to this wonderful book written for the 350th anniversary of the Royal Society, founded in 1660 in London. The Royal Society may not be well known in the U.S., but Ben Franklin, when he was out flying his kite in a thunderstorm, did it for the Royal Society.

You know you are reading a real English-English book when you see the variant spellings such as “mould” and “colour.” This book is lushly illustrated with portraits and photographs of famous scientists—Bertrand Russell, Gödel, Leibniz, among others—along with facsimiles of entries in scientists’ notebooks, such as Crick’s first sketch of the structure of DNA and photos of scientific gadgetry including Newton’s telescope.

Seeing Further is a compilation containing selections from a number of writers on science and literature including notables such as James Gleick, Margaret Atwood, Richard Dawkins, Henry Petroski, John D. Barrows, Paul Davies, and Neal Stephenson, where the Royal Society has a significant place in his novel, Quicksilver.

The Royal Society was founded to assist in promoting the accumulation of useful knowledge. It became Royal by a charter from Charles II in 1662, though the Royal Society is international as indicated by its name the “Royal Society of London,” which is a location, not an allegiance, and by its contributors from around the globe, not all of whom were politically important or wealthy. For example, Leeuwenhoek was a retired Dutch draper with no education who sent 200 papers over a period of 50 years to the Royal Society, papers containing amazing sketches of what he saw under his microscope.

The Royal Society had and still has wide ranging interest in the sciences, to name just a few subjects in no particular order, microscopy, woodland management, the behavior of gases, the pocket watch, the potato, champagne, and archeology. The Royal Society called letters written on topics such as these “Observables,” and observables came in on topics such as meteors, the moon, a fossil, a monument unearthed, an insect captured, the Aurora Borealis, unusual tides, and experiments performed. The Royal Society also held talks on subjects such as minerals, on why it was hotter in the summer than in the winter, on ants, newts, toads, snakes, dissections, on recoiling guns, and pendulum clocks. The Royal Society is still active today, providing grants, medals, and prizes, publishing journals and hosting exhibits.

The chapters in this compilation are not just about The Royal Society but are more like jazz riffs on science, first looking backward, then identifying waypoints, taking a measure of changes in society from scientific discoveries, identifying how things are today, and looking forward to the future. The chapters have themes and connections, starting with the earliest involvement of the Royal Society, to the nature of science, to science’s relationship to society in general. There is just too much variety to review in detail, I will just pick and choose, like Newton, who said, “I do not know what I may appear to the world, but to myself I seem to have been only like a boy playing on the sea-shore, and diverting myself in now and then finding a smoother pebble or a prettier shell than ordinary, whilst the great ocean of truth lay all undiscovered before me.”

James Gleick, who wrote the wonderful book, Chaos, (about chaos theory) provides a section that addresses the rivalry between Newton and Hooke, both members of the Royal Society. When Newton wrote his “Letter on the Nature of Light, Refraction and Colour using Prisms,” Hooke claimed he did it first, and stated of light that “white is nothing but a pulse or motion.” Newton must have been terribly hurt, as he did not publish on the topic of optics again until he was an old man and Hooke was dead and buried.

Margaret Atwood, author of The Handmaid’s Tail, provides a humorous but ethically pointed account of mad scientists and B movies, her own experiments with a chemistry set as a child, and how Jonathan Swift satirized the Royal Society in Gulliver’s Travels, “Their great offence is not against morals: instead they are offences against common sense.”

Margaret Wertheim reflects on the relationship among man, religion, and science in relation to values and modern society.

Neal Stephenson writes on the rivalry between Newton and Leibniz, which surprisingly was on a subject outside of who first invented Calculus, but was an exchange of letters on the relation of god and religion to man and science, which were written during the period when metaphysics was as respectable a topic for scientific discussion as mathematics.

Rebecca Newberger continues this thread, pondering the question that if the gods don’t intervene teleogically, then what path man? Her section covers the divide between scientists theoretical and experimental. This divide might be no more than a temperamental distinction, one that has a long history back to Plato and Aristotle.

Simon Schaffer writes on the importance of evidence, and when stakes are high, whose evidence should be trusted? He covers a case history of an early use of lightning rods, in this instance in 1781. What happens when a lightning rod fails and a building catches fire? Was it a failure of the lightning rod as a concept, of how lightning rods are supposed to protect, the particular design of the rod, or of the rod’s installation and grounding? The determination of where the fault actually lies could reflect badly on the Royal Society. I won’t say more.

Richard Holmes writes about the early history of manned ballooning, which includes the famous quote of Benjamin Franklin, who when asked of the use of a balloon responded, “What’s the use of a newborn baby?”

Richard Fortey writes about the Royal Society’s involvement with and founding of several natural museums and living collections (botanical gardens) in England.

Richard Dawkins provides a chapter about Darwin and evolution—no surprise.

Henry Petroski, contributes a chapter on the engineering of 18th century bridges—also no surprise.

Georgina Ferry includes a chapter on crystallography and crystallographers in the U.K., the history of which includes one Dorothy Crowfoot Hodgkin and a funny anecdote that comes out her of solving the structure of penicillin in 1945 (in work kept secret by the war). Understanding of the structure of penicillin was important, as it was the first step to the invention of synthetic antibiotics. At the time a colleague, Jon Desmond Bernal told her “You’ll get the Nobel prize for this,” and she said she’d rather have membership in the Royal Society. “That’s more difficult,” he replied. Eventually she attained both.

There’s also a chapter on biodiversity, a chapter on Francis Bacon and “making stuff,” the link between manufacturing and science, and a chapter on biotechnology. Today biotechnology is considered just another industrial process, the ethics a given. As a result, genetically modified plants intended to reduce the need for pesticides or for yielding longer shelf-life become the dreaded Frankenfood, possibly causing one to pause and reread Atwood’s chapter on mad scientists.

Paul Davies’ chapter reflects on our place in the universe, namely that humankind does not occupy a central position in the great scheme of things, astronomically speaking. In consideration of this possibility one may pause and go back to reread Margaret Wertheim’s section.

Ian Stewart’s contribution is on mathematics, in particular on two members of the Royal Society, Newton and Boole. (Boole is my personal hero, I use his mathematics every day in computer programming, and so must point out that on page 350 of the text is a notation error, a plus sign used, where a circled plus sign is intended, for “exclusive or.”) Stewart’s focus is on math as a hidden subject: that it’s there but no one knows it, even to many of those of us who use it. You don’t have to know how to program a computer to download music from the Internet.

John D. Barrow—if you are unfamiliar with his writing on mathematics you should immediately stop reading this review and put him on your short list of authors you intend to read right now—discourses about symmetry and complexity. An amazing writer, Barrow provides a surprisingly understandable diagram of the Grand Unified Theory and also an understandable (if simplified) description of String Theory, which makes this section a nice companion piece to Yau’s book The Shape of Inner Space, previously reviewed in the NY Journal of Books.

The Royal Society has been active in the climate change debate, and there is a section on geoscience, including our biosphere and the carbon cycle, followed by a curious if not frightening section considering the various possibilities of how the world may end, as explored through history, literature, and apocalyptic fiction.

Stephen H. Schneider’s contribution is taken from his book, Science as a Contact Sport, covering risk management and climate change, in particular the intersection of interests in science and politics over global warming. On modeling climate change he states that “models are like dirty crystal balls, but the tough choice is how long we clean the glass before act on what we can make out inside,” and “uncertainty is no longer a responsible justification for delay.” Schneider also discusses the difference between Type I and Type II errors. The understanding of this difference is seldom addressed but very important in both politics and science. (So important are the topics in this section that if I were the book’s editor, I would have moved this chapter up a few in selection order; then again, perhaps it is better to save the best for last.)

Gregory Benford provides a section on the concept of time and the conflict between scientists’ views of the age of the earth versus fundamentalist religious views. He covers Einstein’s and Minkowski’s understanding of time as relative and inseparable from space, becoming space-time, a joint entity.

Martin Rees the current president of the Royal Society provides the conclusion and epilogue, quoting the former president of the society, George Porter, on the false division separating theoretical and applied scientists by saying, “There are two kinds of science, applied and not yet applied.”

This book leaves us begging for more, with one excellent question to take away: What will we understand 50 years hence in 2060?

Seeing Further is an excellent compilation on science covering a variety of topics, voices, and perspectives. Most importantly it takes a stand and has important points to contribute to the overall discourse. This book also provides a wealth of ideas for your mind to work on with a Further Reading section. Seeing Further will cause you to think, not just about science, but about what you believe. (The only disservice to the reader is the lack of any definition of the scientific method itself, which is surprising considering that it was defined by Francis Bacon, a proponent of the Royal Society!)