The Twist of a Knife: A Novel 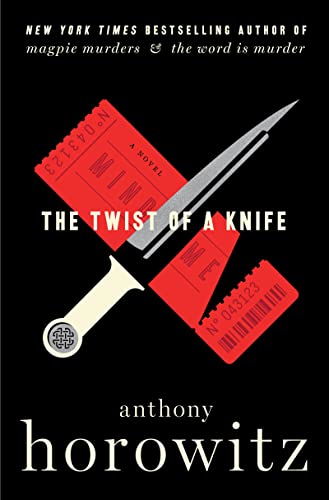 “Since this is about show biz folks, there’s plenty of name-dropping of people, places, and events to titillate while bringing the story easily into the reader’s world, making it both contemporary as well as believable.”

Author Anthony Horowitz has just made a momentous decision; he’s not going to write any more novels in his bestselling series about his friend Hawthorne’s detecting abilities.

“I had agreed to a three-book contract and as far as I was concerned, three was enough.”

Though he doesn’t kill off the detective, he, like another writer chronicling similar adventures, has decided to go on to Bigger and Better Things.

In fact, his play Mindgame, is opening soon at the Vaudeville Theatre in London’s West End, and Horowitz is giving it all his attention.

“Before I started writing novels, I wanted to work in the theatre, I acted in plays at school. I directed them at university. I went to shows three or four nights a week . . . Perhaps that was part of the reason why I wrote Mindgame. I was keeping the flame alive.”

Soon, however, he may be regretting his decision to cut Hawthorne out of his literary life.

Critic Harriet Throsby attends Mindgame’s opening night and later crashes the party afterward. She’s acid-cruel to the cast and leaves smarting ears and egos behind when she departs. A little later, her review slashes both the play and the cast’s egos to ribbons. That night, more than one person has reason to wish Harriet dead and a few say so.

“‘This isn’t a review. This is a filthy piece of slander. And it’s the third time she’d done this to me . . . I’ll kill her. I swear to you . . . !’ He was holding the dagger that Ahmet had given him. He slammed it down into what was left of the cake.”

In the morning, someone acts on that wish. Harriet Throsby is found in her home stabbed to death.

The weapon is a medieval dagger—just like the ones the director gave as gifts to each member of the cast—but this one has Anthony’s fingerprints on it.

Arrested by none other than Detective Inspector Cara Grunshaw, out for revenge for her humiliation in another case in which she crossed swords with Hawthorne and Horowitz, Anthony appears doomed.

“Here she was, waiting to come in, with her equally unfriendly assistant standing beside her, both of them gazing at me like hyena who has stumbled across a fresh carcass. I knew I was in trouble even if I had no idea what that trouble might be.”

On the run, Anthony delves into Harriet’s background and learns quite a few disagreeable facts about the woman everyone loved to hate.

When another critic is discovered to have died years before under mysterious circumstances, the future looks grim indeed. There are simply too many coincidences tying Anthony to that death, as well. His only hope is to do some hasty backtracking and reach out to Hawthorne for help.

“‘Hawthorne,’ I said, trying to keep my voice steady, ‘I need to stay here tonight. I can’t go home. Cara Grunshaw was there. She was with my wife! I can’t check into a hotel. I’ve got nowhere else to go.’

He looked at me sadly. ‘I’m not sure, mate. If the police have issued a warrant for your arrest, I’d be breaking the law by sheltering you. It might make me an accessory.’”

Can Anthony salve Hawthorne’s bruised ego, mend their burnt bridges, and convince him to take the case?

The Twist of a Knife is a delightful story and an entertaining mystery. Since this is about show biz folks, there’s plenty of name-dropping of people, places, and events to titillate while bringing the story easily into the reader’s world, making it both contemporary as well as believable. Those names and the titles of movies and plays mentioned will bring a definite thrill of recognition.

Being presented in the first-person point of view also makes for a closer relationship with the narrator who, we hope, will not turn out to be the killer (a la The Murder of Roger Ackroyd) though for the majority of the novel, that outcome seems to be a done deal.

Horowitz (whose Magpie Murders is currently featured on PBS) is an entertaining writer, his words witty and descriptive, and if this is the first novel of his encountered, it should send the reader scrambling for the others in this series—seeking more of the same.

Read The Twist of the Knife and don’t stop there. Seek out The Word is Murder and the others and give yourselves a treat as well as a whirlwind trip into the world of theater and murder.