Massive: The Missing Particle That Sparked the Greatest Hunt in Science 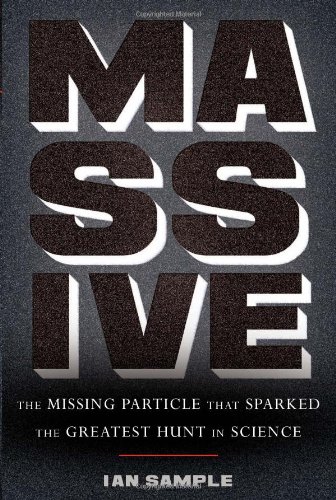 One of the ongoing mysteries of physics is why stuff weighs what it does. Massive is a tale of search and of discovery, of the hunt for a particle of high mass and very short lifespan called the Higgs Boson. The Higgs Boson, which as yet has not been found, may lead to yet another revolution in science, a bridge to hidden worlds. Ian Sample is the science correspondent for the Guardian, a newspaper in the U.K., and tells this tale in a very readable almost conversational tone of voice. If this book has any deficiency, it is the lack of illustrations, whether to give faces to the names or visual images of the objects described.

Ian explains the physics in an understandable manner and provides a short history of the discovery of elementary particles, the electrons, protons, and neutrons that make up an atom. I will attempt to summarize this, but forgive me if I get it wrong, and yes the whole thing sounds fantastical to me, too.

Here goes: A proton holds three quarks, in fact everything we know of is comprised solely of quarks and electrons. The total number of fundamental particles is 24, which are 6 kinds of quarks in 3 varieties (which yields 18), plus 6 leptons (leptons are ub varieties or “flavors” like quarks, and include electrons, muons, and neutrinos). Quarks are held together the nucleus by the “strong force,” called gluons. If a proton’s mass is the sum of the quarks and electrons (3 quarks plus 1 electron), then 99% of a proton’s mass is unaccounted for. The strong force, gluons that bind the quarks together, has mass. There are other particles in the Standard Model, but these kinds of particles aren’t building blocks of matter, they are necessary to transmit the forces of nature. These force-transmitting particles are called bosons. Of the forces carried by these particles, the Electromotive Force (EMF) is carried by photons. (I found Nobel Prize winner Frank Wilczek’s “The Origin of Mass” to be helpful, which can be found at frankwilczek.com.

There’s more. The W and Z bosons are called the “weak force” and can be found when certain radioactive elements decay. To complete the list, there is the as yet undiscovered Higgs Boson. Higgs’ theory is that at the birth of the universe, for a fraction of a second, the elementary particles were massless. In that initial fraction of a second an energy field came into existence and particles caught in this field acquired mass. The Higgs particle is not directly responsible for all the mass in the universe, but the crucial first endowment of mass. This Higgs field becomes crucial to defining the structure of the universe, and the Higgs Boson is s the part of the field left over after it has given mass to particles. The Higgs Boson remains, to date, the one missing piece of the Standard Model of physics.

Next, Max Planck realized that the colors produced by heating an object correspond to its temperature, that shorter wavelengths had greater energy, and that photons are produced in packets or quanta, not waves. Einstein used the quantum nature of light to describe the photoelectric effect, for which he won the Nobel Prize.

Heisenberg’s quantum theory was then used to explain the structure of atoms. Schrodinger’s working of the same issue from the perspective of waves and wave equations results in two separate versions of quantum mechanics; light as waves and light as packets, one that could be derived from the other, but couldn’t be reconciled with Einstein’s theory of relativity. The equations wouldn’t work near the speed of light.

Dirac next then gave us electron spin, negative energy (antimatter), and also managed to reconcile quantum mechanics with relativity, which allows the standard model to become the Standard Model.

All of which brings us up to Peter Higgs. The belief that protons were made up of quarks, a theory in 1964, was still contentious in 1966 where in Princeton, invited by Freeman Dyson, Higgs gave a seminar on his theory of the origin of mass. The key to Higgs theory was symmetry. Symmetry in physics is that the properties of nature stay the same under different circumstances.

But perhaps, in the very early universe, symmetry was broken, if so new laws would be needed to understand how nature operated. The problem is also one of mass, how can massless particles at the big bang acquire mass? It was known that when a photon interacts with a superconductor, the photon “becomes heavy,” known as the Meissner Effect. The question of how massless particles was considered by several physicists working independently and in teams. Higgs was not the first to write about the question of the origin of mass, but he was the first to identify a particle with the field, and so his name became associated with the theory.

If one theorizes of the existence of a new field, then one then has to discover it to prove its existence. The gravity field, for instance, is easy to measure as its magnitude is different from place to place varying with the distance from the center of the Earth—but the Higgs field is not like the gravity field. The Higgs field is hidden in the vacuum of space, and in order to directly induce variations one would need to heat the universe to one million billion degrees C, which even if this were possible “would be highly inadvisable.” One would have to go after the Higgs Boson indirectly.

The “weak force” converts hydrogen to deuterium (heavy hydrogen). The weak force as a force doesn’t extend far, only a hundredth millionth of a nanometer, one percent of the width of an atomic nucleus, which is why it is called “weak.” Weinberg at MIT in 1967 combined the weak force with the electromagnetic force, calling the combination the electro-weak force, and built this theory around the presupposition of the Higgs field. This theory called for the existence of two new particles, the W and Z bosons. The W particle has the mass of 40 protons, and the Z particle twice that, and both are reflected in the title of this book, Massive. If the W and Z particles could be found, that would provide evidence for both the Higgs field and the Higgs Boson.

In 1970 a “neutral current track” was discovered, produced by a particle accelerator, giving proof of the electroweak force, and from this discovery questions about “spin” or the “handedness” of nature arose. Handedness means that molecules can be built in two forms, one a mirror image of the other, each form having different properties, and handedness as spin is also property of quarks. Force transmitted by the Z particle only affects particles with left-handed spin. Handedness too is built into our own DNA. The Z boson may have provided handedness for the particles of life, and so the Higgs boson was also called “The God particle”!

The purpose of any particle collider is to slam particles together at sufficient speed such that the energy released by the collision yields information about what was inside.
No accelerator in the 1970s was powerful enough to make a W or Z particle, and regardless, the electroweak force would only be a sign of the W and Z particles, not the W and Z particles themselves. The more unstable the particle the more energy would be needed by the accelerator, 92 GeV (Giga electron volts) for the Z, and 160 GeV for the W.

At CERN, a research consortium in Europe, new form of accelerator was proposed to achieve the increased power needed, one that slams two streams of particles against one another, one stream made of particles, the other of anti-particles. “Anti-matter is difficult stuff to handle,” and the generation of large numbers of cooled anti-electrons (positrons) was not possible until 1978. At the time the estimated maximum energy output at a particle accelerator at CERN was 540 GeV at CERN, while Fermilab in Chicago was going for 1000 GeV (1 TeV) in an accelerator called the Tevatron. The Tevatron though was not set up to look for the W or Z particles and had disadvantages despite the higher power.

The W particle was discovered at CERN in 1983 and also discovered the Z particle six months after. The construction of larger and more powerful particle accelerators is an expensive competition between nations. The discovery of new particles directly leads to Nobel prizes, and ambitious scientists tended to move to the nation with the best particle accelerator. America was losing ground in the hunt for the Higgs Boson, and so the SSC, the superconducting supercollider was proposed, to produce energy of 40 TeV at an estimated cost of $4.4 Billion. The SSC was controversial within the U.S. physics community, which considered it needlessly large and expensive. In 1991 its estimated cost went up to $8B, then $11B, and was cancelled in 1992 after losing to a funding competition against the International Space Station. $2B was spent on the SSC before cancellation.

CERN countered the SSC with a proposal for the Large Hadron Collider, the LHC, but in the meantime as an intermediate step built the LEP, the Large Electron Positron collider, turning it on in 1989. At the time it was the largest civil engineering project in Europe, a 27 Km ring installed in an underground tunnel. The LEP was so sensitive that stray currents that powered the high speed rail nearby made their way into the LEP measurements as also did changes in water level in lake Geneva, and earthquakes in Turkey, 2000 Km away. It was also sensitive enough to be affected by the moon, stretching and shrinking by a millimeter. In 1995, the LEP was sabotaged by a control room operator who dismantled a portion of it and held the pieces for ransom. He was caught and the LEP was quickly put back together, but in 1996 the LEP was again sabotaged, two Heineken bottles were found in a beam pipe.

In 1999 there were concerns expressed in the media of mad scientists running amok, that a particle collider could create a “strangelet” similar to Kurt Vonnegut’s Ice 9, a particle that transformed matter, growing and consuming the earth, and the possibility of a particle accelerator causing “vacuum decay.” In the theory that the normal vacuum of space might not be the lowest energy state, there might be a greater, different vacuum where the laws of physics are changed in an instant and the conditions for life destroyed forever. Fear over extremely unlikely events created a media firestorm. Brookhaven labs was even sued (unsuccessfully) to stop operating in the belief it could create a black hole that would destroy Earth!

In 2000 the LEP produced 182 GeV 208 GeV and just might have detected a Higgs-like event, but needed to operate longer to be sure. This was not to be. The LEP was shut down to make way for the construction of the Large Hadron Collider, the LHC, in the same space. While the LHC was being built, the Tevatron in Fermilab was boosted to 1.96 TeV and more Higgs-like events were detected which caused another media frenzy, in this instance a newspaper mistakenly declaring that the Higgs boson had been detected when it had not.

In 2008 the LHC is turned on. Only nine days later it has an extremely damaging explosive failure caused by poor construction. It is repaired and turned back on in February 2010 (and you can see we are rapidly approaching the present), but not full power for fear of another accident. In 2011, the LHC will be shut down for maintenance plus additional safety measures prior to producing higher power. So, all you armchair physicist-generals, expect no announcement of the discovery of the Higgs Boson before 2015.

Since Massive is packed with so much interesting information, it was necessary to provide more of a book report than a review. I simply couldn’t help myself. Go. Read. Enjoy.