The Best Writing on Mathematics 2012 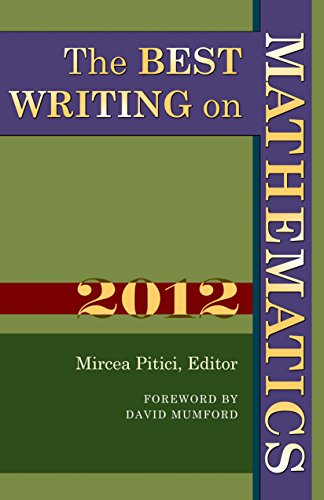 “Such a good collection that I can’t wait for next year and The Best Writing on Mathematics 2013.”

The Best Writing on Mathematics 2011 reviewed a year ago on this very website was insightful, informative, and engaging. A year has passed (all too quickly) and the 2012 edition is here and it’s just as informative and delightful. Also back with his keen eye is editor Mircea Pitici.

This year’s best essays on mathematics cover a wide variety of topics including biography, geometry, origami, and math as it relates to music, dance, philosophy, and teaching. As with last year’s edition, this reviewer kept his laptop nearby and used the Internet as a reader’s aid, visiting links, googling names, and wikiing topics.

From the foreword by David Mumford we learn that the distinctions between (applied and pure) math and physics were unknown until recently. Today it is different; the fields no longer form a single space for scientists to easily move back and forth—though this distinction is artificial.

“What we need,” says Mumford, ”is to work harder at explaining our work to each other.” This collection does just that.

Mathematics continues to be a rich and growing field, filled with insightful writers sharing historic and modern connections.

This review will provide a short synopsis of a few of the contributed essays.

The opening essay, “Is Mathematics Discovered or Invented?” by Timothy Gowers, is a look at the philosophical stance behind the question. One might ask, was the complex number system is discovered, invented (or created)? Any choice would not be clear cut. Discovery implies the object was always there. But discovery in mathematics seems more like a transition or an observation, going from unknown to known.

Applying the label invention brings up connotations of machines such as steam engines and airplanes, or games or techniques. Mathematicians invent not things so much as methods. If the question were addressed of art, art appears to be created more than invented or discovered, though art appears to have more in common with invention than discovery.

What has been brought into existence by mathematicians may have arbitrary features, over which the discoverer may have no control. Although mathematical proof has a feeling of invention, mathematicians prefer to use the label “constructed.” Perhaps there is no better explanation than to simply say that mathematicians do mathematics.

“The Unplanned Impact of Mathematics” by Peter Rowlett continues along the questioning path. Mathematicians often invent “things” without knowing in advance what purpose the “thing” will be used, and often without knowing if that “thing” will turn out to be useful at all. That the politics of funding puts pressure on scientific research to predict impact even before research is begun is especially true for for pure mathematics.

The author provides unsung stories of the unplanned impact of mathematics, though one mathematician who preferred his mathematics pure said he was “appalled that his theories had been sullied in this way.”

“An Adventure in the Nth Dimension” by Brian Hayes considers the higher geometric dimensions. We are all familiar with the first three dimensions: the point, the line, and space. There are practical considerations for using higher dimensions in solving certain mathematical problems, and many computational tasks can be carried out in a high-dimensional setting.

Though higher dimensions in geometry may be easy to create they are difficult to imagine. The topic of this essay is simple, putting an n-dimensional ball into an n-dimensional cube that is just big enough to hold it. The implications of increasing n are less simple. As n increases, the fraction of the cube filled by the ball falls—but not linearly. The cube inflates exponentially while the volume of the ball shrinks to insignificance. What makes all this extraordinary is the ball in question is still the largest that can be stuffed inside the cube. How can anyone make sense of this?

“Structure and Randomness in the Prime Numbers” by Terrence Tao addresses interesting properties of prime numbers. There are infinitely many prime numbers and yet they remain difficult to find—there is no quick way to find primes deterministically.

However, there are quick ways to find primes randomly. Similarly, it is difficult to prove conjectures about prime numbers. Though we have many ways of establishing whether a pattern exists, there is a more difficult question for primes. How can one demonstrate the absence of a pattern?

The essay, “The Strangest Numbers in String Theory” by John C. Baez and John Huerta concerns the “octonion.” The essay begins by reflecting on another question: not whether mathematics is invented or discovered, but is mathematics is really real. This problem goes back to the square root of minus one (some might say it goes back to the reality of negative numbers). Does the square root of minus one exist, or is it a trick?

Octonions, discovered (or invented) in 1843 can be used to solve problems in eight dimensions and today has become adopted by string theory. And before the octonion, there was the quaternion, discovered by Hamilton. William Rowan Hamilton was searching for a three-dimensional number system that supported add, subtract, multiply, and divide. To make the system work he needed a fourth dimension and came up with the quaternion. The quaternion is expressed in the form of a + bi + cj + dk, where i, j, and k are three different square roots of minus one.

Today quaternions have been replaced by vectors, which are mathematically simpler to manipulate. At the time of quaternion’s invention Hamilton’s friend John Graves asked, “If with your alchemy can make three pounds of gold, why should you stop there?” and came up with the eight-dimensional octonion. Octonions are often called Cayley numbers, because Arthur Cayley beat John Graves to publication.

The mathematician Bernhard Riemann proved that any mapping from a sphere to a plane introduces distortions, and so the goal for mapmakers is one of choosing the mapping that shows the least amount of distortion for what you want to do (apparently map users don’t often visit Greenland). In “Mathematics Meets Photography: The Viewable Sphere” by Davit Swart and Bruce Torrence, the reader learns about super-panoramic images that are created through digital photography combined with photo-stitching software and computers. Super-panoramic images capture the entire viewable sphere with minimal distortion (though distortion still exists). The images provided in the book are stunning, and readers should also visit the links to images provided in the references.

“Routing Problems: A Historical Perspective” by Giuseppe Bruno, Andrea Genovese, and Gennaro Improta. Routing problems have been known through history under different names and forms. A typical solution provides the most efficient way to visit a predetermined number of locations by traveling the fewest number of paths without repeating paths or revisiting locations and is often not as simple as it sounds.

First known as the Seven Bridges of Konigsberg problem, it proven by Euler in 1741 to be unsolvable. In 1857 William Rowan Hamilton turned the routing problem into a game.

One, (perhaps not so strange) is mathematicians can find out things simply by “thinking.” The other, (perhaps only a bit strange), is what mathematicians prove to be true, is true for the world and for all time.

This essay also points out the relative rarity of mathematical giftedness, and that gifted mathematicians express surprise—not at their discoveries, but at the existence of their discoveries. The ability to be surprised also connects to another essay, Was Cantor Surprised? by Fernando Q. Gouven, which delves into the historical context of Georg Cantor exclaiming of one of his theorems, “I see it, but I don’t believe it.”

“Ultimate Logic, To Infinity and Beyond” by Richard Elwes begins with David Hilbert’s list of 23 unanswered questions in mathematics first formulated in 1900. Of this list, one unsolved question stands out for its “sheer oddness”. This question is the unproven Continuum Hypothesis.

This review covers only a sampling the essays in this collection. The Best Writing on Mathematics 2012 will be sure to delight all who enjoy or are just curious about math. For those who are familiar with the series, 2012 provides just as fine a harvest as 2011.

This is more than a collection of essays on mathematics; a reader will find useful references, links to websites, and free online mathematics books. Such a good collection that I can’t wait for next year and The Best Writing on Mathematics 2013.