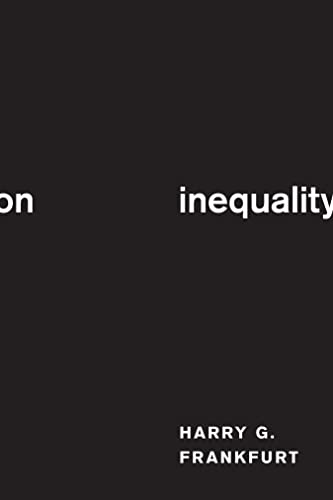 “On Inequality is neither informative nor entertaining.”

In the first chapter, “Economic Equality as a Moral Idea,” the author critiques economic egalitarianism and thereby strikes a straw man dead. In the second chapter “Equality and Respect,” the author identifies grounds where economic equality may be of moral significance, but does not look too closely for fear of actually seeing something on which he might have to take a moral stand.

From the preface, Frankfurt states “Insofar as economic inequality is undesirable, however, this is not because it is as such morally objectionable . . . To the extent that it truly is undesirable, it is on account of its almost irresistible tendency to generate unacceptable inequalities of other kinds.” This, he claims is not morally objectionable—it is at most pragmatically objectionable in that inequality gives advantage to exploit and pursue undue influence over electoral and regulatory processes, and thus undermine the integrity of our commitment to democracy. Yet rather than explore the undemocratic nature of economic inequality more fully, and on later discovering that Frankfurt claims equal rights to be “intrinsically valuable,” one wonders what kind of moral ideals Frankfurt does believe in.

Instead of defending the downtrodden, Frankfurt defends against something that no one appears to be arguing for: He claims it is misguided to endorse economic egalitarianism using the literal meaning of egalitarianism, that is, to be exactly equal. Why he does this is that he claims determining how much is enough is too difficult. “A theory of equality is much easier to articulate than . . . a theory of sufficiency.” Despite this claim, he earlier recognizes the poverty line is a definition of sufficiency (see Wikipedia’s entry for “poverty threshold”), and then either contradicts himself by saying it is too difficult or forgets that the definition exists. His argument against economic equality thus becomes a straw man argument against making everyone exactly equal. He is arguing against an absurd forced equality of Kurt Vonnegut’s equally absurd Harrison Burgeron.

Though to Frankfurt, providing a more egalitarian distribution, that is, to reduce the extremes is not objectionable, but also he claims there’s not enough moral reason to do so. “The fact that some people have much less than others is not at all morally disturbing when it is clear the worse off have plenty.” To which this reviewer (who can’t resist the oh-so-perfect setup) feels compelled to respond, Let them eat cake.

Frankfurt also enters a rhetorical debate on the philosophy of “diminishing marginal utility,” asking whether at a certain point, more money has less use for those who are already wealthy. Frankfurt denies that this is possible—in this particular instance Frankfurt may be on to something. This reviewer is reminded of a conversation in the movie Key Largo between the hero, Frank McCloud (Humphrey Bogart), the hotel owner James Temple (Lionel Barrymore), and mobster Johnny Rocco (Edward G. Robinson):

Frank McCloud:       A world in which there's no place for Johnny Rocco.

Frankfurt offers pop-psychology on why people want what they want, using the word “rational” in the economic sense, as in if you do not agree with the economist’s world-view, then you are irrational. One just might consider this world-view to be biased, though to no surprise the author denies any bias. “My discussion is motivated exclusively by conceptual or analytic interests. It is not inspired or shaped by any social or political ideology.” Saying you aren’t biased then following with statements that are biased, appears to be the pastime of authoritarians living in a bubble. As Anatole France noted on the extreme unbiased nature of the law, “The law, in its majestic equality, forbids the rich as well as the poor to sleep under bridges, to beg in the streets, and to steal bread.”

Compared to the wisdom shared in On Bullshit, On Inequality is an under-thought out and over-biased disappointment.