Up Till Now: The Autobiography 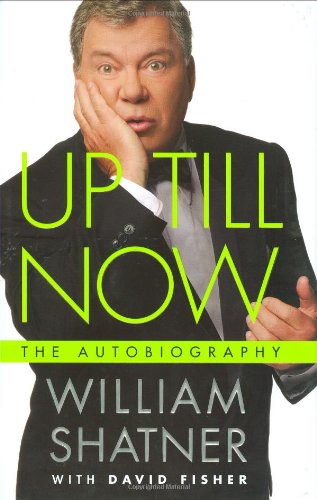 For more than 50 years William Shatner has lent his talent to a plethora of characters. Those that follow his career give him due credit for his several roles in plays of the “Stratford Shakespeare Festival” and his appearance in the movie Judgement at Nuremberg. We recognize him for his recordings like “The Transformed Man,” and as an all right “T. J. Hooker.” And we will always remember his job as the Priceline-dot-com diva. His appearance on TV’s “Third Rock from the Sun” as the “Big Giant Head” was hilarious. In spite of the shock of watching Shatner and James Spader dressed as pink flamingos, fans (myself included) will, on cue, recite memorable Denny Crane’s quotes and dialogues from the TV show “Boston Legal,” where he’s proved his comedic chops. Not to mention his off-beat celebrity interview series “Raw Nerve” on the Biography Channel.The crux of the matter is, notwithstanding his prolific career, my memory betrays me. As soon as I think of “William Shatner” I see him sitting on the bridge of the Starship Enterprise; defeating Klingons and Romulans; barking orders; wearing that gold, floppy, long sleeved T-shirt; and checking Yeoman Rand’s long legs every time she leaves the room.To tell you the truth, it’s his fault. And it seems that, finally, he has accepted the fact. It’s right there in Chapter One, in the first paragraph of his autobiography Up Till Now: “I was going to begin my autobiography this way: Call me . . . Captain James T. Kirk or Sergeant T. J. Hooker or Denny Crane . . .” and the list goes on and on revisiting some of his characters. He chose to start with Kirk, not as one of The Brothers Karamazov, or as a lawyer in “The Defenders” or as Alexander the Great. He was Kirk, at some point he “stayed briefly” as other characters, but he’ll always be Kirk.Shatner gives the impression that the book will begin with a list of his accomplishments on stage and in front of the cameras, but he changes his mind and explains that he should start his biography talking about a memorable event in his life: how he met Koko the Gorilla. And he describes the event . . . the entire event. In detail.Then he changes his mind again and decides to start the book with the lyrics of one of his songs, which he reproduces. But changes his mind again, and yet again. At this point I was laughing out loud and thinking that he found a way to start the book the way every fan expected he would: talking about James T. Kirk . . . but not exactly. This is, of course, the main theme of this book. Shatner and his co-author/interviewer/medium David Fisher, managed to make very clear that, significant and defining in his career as it may be, the Captain of the Starship Enterprise was not the only character he impersonated—although he doesn't mind if you want to keep picturing him as the Starfleet Officer that saved the Galaxy on a weekly basis.Even to the reader that looks down on science fiction, the book is ever entertaining. Not only because most of his on stage/camera personas became pop icons, but because David Fisher, author of more than fifteen New York Times bestsellers, captured Shatner’s quirkiness in every detail. The narrative flow is frequently interrupted by what could be interpreted as a “note to self” or an isolated thought or consideration, with no relation to what is actually going on in the chapter. The book has, believe me, commercial breaks. At some points the authors build tension and expectations . . . only to, as in a TV series, create a cliff hanger while telling the reader about a website, or an event.Fisher captured in writing even the (in)famous “Shatnerisms.” The Urban Dictionary defines Shatnerism as a disease in which the victim pauses for dramatic effect after 2–4 syllables of speech: Oh my . . . God it's . . . the space people of . . . Quazar IV!In a world where most showbiz personalities take themselves too seriously, Up Till Now sounds like three friends talking over a couple of beers. The reader feels included, welcomed. Shatner opens his house, his life, and his heart through Fisher’s skillful writing. We add our attention and some of our time. The result is one of those books where the reader is kindly taken on an honest tour through most of the good and bad times of the actor’s life.It certainly helps to demystify Shatner, even to (pardon my neologism) deKirkify him a bit, starting with his picture on the cover and ultimately turning him into a lovable person. That obviously contrasts strongly with the opinions of a lot of his co-stars on “Star Trek” and those of some other entertainers as well. Suffice it to say: Watch the 2006 Comedy Central special “Roast of William Shatner” where most of these points of view are laid bare graphically.Regardless of what people may think of Shatner, his personal life, his career, his acting technique (or lack thereof) and. his. choices. on. how. to. convey. emotions., Up Till Now is one of those books that, after you’ve read it, when you see it on a shelf, it’s almost impossible not to smile slightly. And that’s exactly what we need to find, once in a while, between the two covers of a book: a spoonful of positive sentiment.Reviewer Fabio Marchioro is the award-winning author of Pensagens, a collection of 18 short stories, and the novels Geena (2003) and Revessa (about to be released). He is a seasoned graphic novel reviewer.