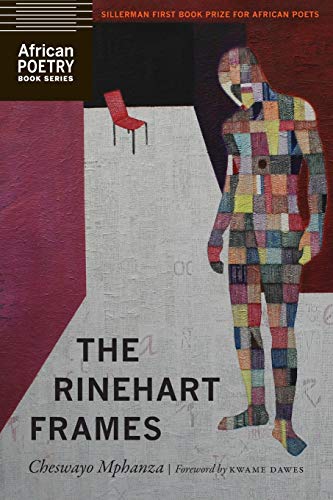 “Mphanza’s poetry is for sure African; it is also international, speaking to all continents and peoples. Good poetry transcends geographical borders.”

Cheswayo Mphanza is a young American poet raised in Chicago, born in Zambia. The Rinehart Frames is a title in the African Poetry Book Series, published by University of Nebraska Press, under Kwame Dawes’ editorship. Dawes has written the Foreword for the title, explaining the contours of Mphanza’s poems. For readers unfamiliar with cento poetry, the Foreword will be indispensable before stepping into the book.

Cento poetry is an ancient form of poetry, starting with the Greeks and Romans, in which the poet borrows phrases and lines from other poems. The first poem in the book, for example, consists of 22 lines, each line taken from another poet or writer. At the end of the book, Mphanza documents the sources for the borrowed lines. The poet’s contribution is the lines’ organization, rather than writing the lines as is customary in non-cento poetry.

Some schools employ cento poetry as a method to launch students into writing poetry. It is much easier for students to select lines from published works and put them together to craft a poem. Cento poetry, a form of acknowledged plagiarism, serves as training wheels to learn to write one’s original poetry.

Cento poetry in the hands of experts is not the same as cento poetry in the hands of initiates. “The Waste Land” by T. S. Eliot, published in 1922, one of the most beautiful poems of the 20th century, is cento poetry—a long poem in which Eliot copiously borrows lines and phrases from Homer, Virgil, Shakespeare, others, and the Hindu mantra, shantih, shantih, shantih. Unlike Mphanza, Eliot does not credit the lending sources but assumes that the informed readers would recognize the creditors.

By way of criticism, cento poetry is “show-off” poetry where the poet is inserting lines from the masters to puff up their work. When a poem is altogether borrowing, as is Mphanza’s first poem, and the sources are listed, the “show-off” criticism turns into a “show-me” demand, requiring the poet to establish the poem’s existential worth.

Since the poet is unavailable to meet the demand, the reader must come to terms with the cento-poem and discover its meaning. This literary burden forces the readers to research art and literature to figure out the poem’s structure, the rationale of borrowing, sequencing of lines, and the poet’s intentions. Reading cento-poetry turns into an academic workout.

The readers who do not know that a poem constitutes a quilt of borrowed patches might enjoy cento-poetry at a level other than the fully informed readers. Editor Dawes explains that the readers must “engage with what is on the page and with an openness to follow the trails the work creates to other sources” in the listed literature. (This is a fair recommendation. In law review articles and judicial opinions, the readers can explore a point deliberated in the text through the footnotes’ sources.)

The book’s title, The Rinehart Frames, brings together two masters, one African American, the other Iranian. Rinehart is the narrator and protagonist in Ralph Ellison’s Invisible Man. A tortured soul who descends into a “manhole” to view the world, Rinehart has migrated from the South to seek the unavailable identity in Harlem, New York.

24 Frames is an innovative film that Iranian photographer and director Abbas Kiarostami made to convert 24 still images into digital animation, each lasting a few minutes, reconstructing the moments before and after taking each photograph, thus creating a conversation between the photo and animation.

Mphanza’s book consists of 12 Frames (chapters), each Frame containing two or more poems. The book’s poems are “in conversation,” says Mphanza, with Rinehart and 24 Frames. For a deeper appreciation of the Frames, the readers must know the Rinehart character and watch 24 Frames.

Nonetheless, the book’s cento poems furnish meaning even without grasping Rinehart and the film. “These days I wake in the used light of someone’s spent life/I am often a stranger to myself/I have no place of origin, no home.” Many social outcasts, the homeless, refugees, even immigrants experience living as strangers, feeling homeless in crowded streets, detention camps, even gorgeous homes. Rinehart, too, felt homeless in the South, Harlem, in the “open manhole.” Knowing Rinehart might further illuminate the emotions of being an alien in someone else’s hometown.

Another homeless person that Mphanza inducts in The Rinehart Frames is Amrita Sher-Gil, a Hungarian-Indian painter in the British Raj. Born in Budapest, Amrita lived in various cities and countries, wandering, and died in Lahore, where she was cremated at age 28. Amrita crafted unforgettable paintings in her brief life, now hanging in New Delhi’s and Lahore’s galleries, portraying villagers’ poverty and women’s plight. These paintings inspire painters, writers, Mphanza.

For example, death brought Amrita’s final work in progress, The Last Unfinished Painting, to a sudden ending. Mphanza views the unfinished painting, “the obscurity of the landscape, its lack of details,” to design colorful poetry. “Saris clad on bodies drawn as streaks of brown and beige . . . A bridge with a glossy red painted viaduct, leading to passageways away from Lahore. The lazy farmer who lets his black bulls run loose . . . a white colander holding green grapes and pears.” The poem does not consume the painting; it cannot, not even its colors, but, after striking an artistic bond, the two coexist with separate but unfinished personas.

A fascinating non-cento poem, At David Livingstone’s Statue, is Mphanza’s “original” poetry except for a couple of borrowed lines. The statue, “Livingstone’s bronze body,” sits by Victoria Falls in Zambia (the poet’s home country) in “barren solitude heated by poisonous winds.” Much like Rinehart nursing his existential anguish, the poems’ narrator thinks of “my father’s unmarked grave,” walks through empty grass, and inserts “epithets on airy headstones.” The narrator then turns to Lumumba, an African leader whom the colonists tortured, executed, and later dissolved his body, leaving his wife to mourn “the imagination of him.”

The contrast in the poem is palpable. The solid presence of a colonist highlights the absence of the sons of the soil. The ordinary and the extraordinary Africans, from fathers to Lumumba, vanish in nothingness without a funeral. The narrator reaches “into the duffle bag where I’d been hoarding/the Mason jars of piss to shatter against/Livingstone’s bronze-cast face.”

However, the solution to the heartaches of oppression is elusive. The wounding of a savage monument is “my own undoing.” A poetic understanding of a bitter past is much more satisfying than a violent outburst at history. Tearing apart a still image loaded with acidity is natural and sometimes therapeutic but animating the image into a creative art form is a no less avenging contribution to film and literature.

Filmmakers, novelists, and poets, like Kiarostami, Ellison, and Mphanza, employ innovative tools to recast reality. They do not minimize the atrocities of the past, nor do they let bygones be bygones. They are not forgetters or forgivers. They understand the limits of rage, the inefficacy of revenge, the unlimited efficacy of art and literature.

Mphanza’s poetry is for sure African; it is also international, speaking to all continents and peoples. Good poetry transcends geographical borders.