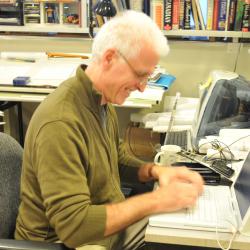 Gordon S. Grice began his career as an architect, practicing first in the British Virgin Islands and then in his hometown of Toronto, Canada. He soon founded his current firm, Gordon Grice and Associates, specializing in architectural illustration and presentation.

In 1993, Rockport Publishers lured him back to his first passion, writing and editing. With Rockport, Mr. Grice produced three volumes of the Art of Architectural Illustration and a subsequent book, Landscape Architecture, which he co-edited with Steven Moorhead. Since that time, he has edited nine volumes of Architecture in Perspective for the American Society of Architectural Illustrators (ASAI); four volumes of Shift for the Student Press of the Ontario College of Art and Design (now OCAD University); and, as of this writing, 58 issues of Perspectives, the quarterly journal of the Ontario Association of Architects, for which he is also a feature writer.

In addition to these activities, Mr. Grice is a Creative Advisor to Forrec, Toronto-based international entertainment designers. He is a Fellow of the Royal Architectural Institute of Canada, and Senior Advisor to ASAI.

He lives with his wife, Fanny, and his children, Antony and Gabriella, in Toronto’s west end.

“. . . a valuable textbook that has arrived in the nick of time.”

“Lester Walker advises would-be home designers to learn how to look at houses.”

“The handmade home is the oldest form of building and also the most personal.

Tenryu-Ji: Life and Spirit of a Kyoto Garden

“Whether you experience Tenryu-ji in person or through the pages of the book, you will learn to understand the enduring appeal of Japanese gardens and will take away a lot more than photogr

“. . . the wise reader will tough it out, because taken as a complete work, the story that these 40 anecdotes tell is captivating.

The Embodied Image: Imagination and Imagery in Architecture

“Mr. Pallasmaa’s architectural journeys are all the more valuable because they are so uncommon. . . . These are brave journeys into terra incognita . . .

You’re blocked again. Your deadline is approaching, and inspiration is nowhere in sight. You’ve read the paper, scanned the TV listings, eaten all the yogurt in the fridge and still: nothing.

My Name Is Red

Reading an Orhan Pamuk novel sometimes feels more like studying a painting or experiencing a work of architecture.