My Soul to Steal 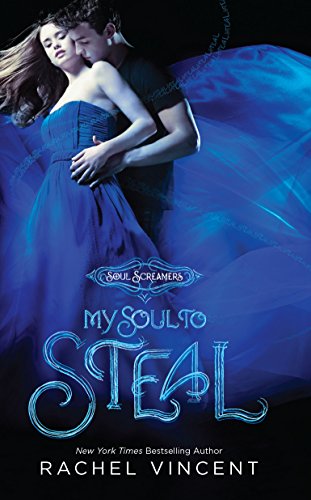 With the plethora of young adult paranormal series available in a post-Twilight world, it can be very difficult to separate the wheat from the chaff—especially as every series proclaims itself The New Twilight! in cover copy and marketing text. At the risk of sounding unprofessionally gushy, allow me to direct you to this series. Rachel Vincent’s Soul Screamers series is the wheat out there, and the fourth installment, My Soul to Steal, is sure to keep this series at the top of any reader’s must-buy list.

Book three, My Soul to Keep, ends on a dramatic (and traumatic) emotional note, and book four, My Soul to Steal, is left to pick up the pieces, which makes Soul to Steal the first “series” book in that there’s no point in reading it if you haven’t read the first three. But, then again, the main point of this review is that you should run, not walk, to the nearest store to get all four, curl up on the couch, tell everyone to leave you alone, and gorge yourself on these books.

The basic premise of the series is that bean sidhe (banshees to the rest of us) exist among us, and Kaylee Cavanagh is one. Only she doesn’t know about it because her family has decided to keep it from her. Instead, she believes she’s insane, unable to stop from screaming uncontrollably, until she meets Nash, who is a male bean sidhe, recognizes her for what she is, and begins the process of teaching her about her abilities, her heritage, and the netherworld that runs parallel to our own. The two have many adventures, involving demons, reapers, and the odd high-school drama.

Without giving away plot points that will spoil the first three books, My Soul to Steal, sees the focus of the series diversify. Nash and Kaylee and their relationship still take center stage, but there is growth and development of secondary characters as they step up to take on major roles and plot points of their own. Readers are also introduced to Sabine, Nash’s ex, newly arrived in town and determined to make trouble. Sabine is an excellent character, one to love to hate, and a great foil for Kaylee—the latter being often too caught up in the thinking, the former almost all about the doing. We are also treated to a stronger portrayal of Tod, Nash’s brother, who up to this point hasn’t been much more than a nuisance. Unlike Kaylee and Nash, who remain mired in the dregs of the past, Tod sees significant growth in My Soul to Steal, and becomes the emotional center of this title in the series.

The paranormal is well balanced by the young adult—Kaylee and Nash deal with parents, school, curfews, and after-school jobs like normal teenagers. One of the strongest aspects of this series is the mature way that Vincent deals with teenage sex. Unlike other YA series that either ignore or preach, Vincent faces teenage desire face on, recognizing that it is a factor in the relationship, handling it in a way that reads true for both her characters and her setting, without ever falling into didacticism or clumsy morality.

My Soul to Steal is not a complete novel, but a bridge between the first three stories and whatever comes next. However, it opens up myriad possibilities and continues building on the intricate, elaborate, and fascinating world Vincent has created. My only criticism is that it will definitely be too long a wait for book five.