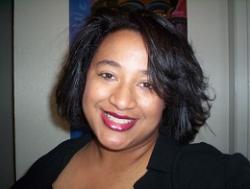 Zetta Brown holds a B.A. in English/Creative Writing from SMU in Dallas, Texas, and is the author of several short stories. In 1998, her short story “Black Water” was a regional first-place winner for the National Society of Arts & Letters (NSAL) Award for Short Fiction.

In 1999 and 2000, her stories were adapted for performance at the Craft of Writing conference in Denton, Texas. She has had a residency at The Writers’ Colony in Dairy Hollow in 2002 and attended the Hurston-Wright Foundation’s Writers Week in 1998.

Ms. Brown is also editor-in-chief for LL-Publications/Logical-Lust Publications. She edited the 2009 EPPIE Award winner for Best Horror Novel, PIT-STOP by Ben Larken. A native Texan, she met her husband, author and publisher Jim Brown, on the Internet. Their romance led to their marriage and her moving to Scotland. She sometimes chronicles her experience in her blog Sistah in Scotland, or SiS for short.

Oil and Water...and Other Things That Don't Mix

Trains and Lovers: A Novel

On a fairly ordinary train ride from Edinburgh to London four strangers, three men and one woman end up in a conversation about love and how it can change a person’s life.

The Supremes at Earl's All-You-Can-Eat

“Government Issue: Comics for the People, 1940s–2000s is a worthwhile retrospective on how government, pop culture, and tax dollars can come together and provides informative readi

Before the End, After the Beginning: Stories

“Other authors may struggle writing from a first-person or third-person point of view and opt to only write in one viewpoint all the time, but Dagoberto Gilb handles writing in either viewp

The Goat Woman of Largo Bay: A Novel

“If the reader has never had the pleasure of experiencing Jamaica or its people before reading The Goat Woman of Largo Bay, s/he will be captivated by a cast of characters as inter

“Pigeon English is a book that can be read by adults and should also probably be read by maturer children ages 10 and up—despite some of the adult themes involved.

The year is 1947. America is basking in the afterglow following the successful end of World War II. Life is simple and so is the entertainment, but Americans had changed and so had their tastes.

Eat People: And Other Unapologetic Rules for Game-Changing Entrepreneurs

Now, after more than a decade into the new millennium, it is time to start seeing, acting, and doing things from a 21st century perspective.

One Size Does Not Fit All: Diversity in the Classroom (Kaplan Voices Teachers)

One Size Does Not Fit All: Diversity in the Classroom is a collection of essays written by 23 education professionals ranging from teachers (including a National Teacher of the Year finali

The title says it all, and the book delivers what is on the label. According to the blurb on the back cover, Leslie Goldman, MPH, is a health writer for the American Medical Association.

In post-apocalyptic Africa in the Seven Rivers Kingdom, there are two peoples: the Nuru and the Okeke.

To define Hazie Coogan’s relationship with legendary actress Katherine Kenton is no easy task. She is more than a personal assistant, companion, housemaid, or even number-one fan.

Take every bit of fact, fiction, or myth uttered about The Beatles as a group or as individuals and throw it aside.

People have forgotten how to eat.

Forest Gate is a novel revealing the true cost of stereotypes and cultural propaganda and how everyone is guilty of this new type of blaxploitation being used by politicians, media—especia