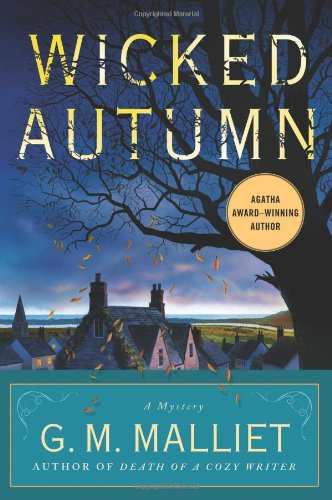 The peaceful, picturesque village of Nether Monkslip is like a time capsule where the clock stopped sometime in the mid-20th century—at least on the outside; but the inhabitants of Nether Monkslip are rooted and ready for the 21st century. Time has not stood still at all. The village and its inhabitants are very much alive. But with life comes death, and in the case of Wicked Autumn, that death is murder.

Max Tudor is the “new” vicar who took up his post in Nether Monkslip three years ago. Max is also a former MI5 agent, so his new vocation is a complete turnaround from his previous profession, a choice he made after a particularly (and literally) earth-shattering event that caused him to reevaluate his career and his purpose in life.

As an MI5 agent, he was required to go deep undercover, to tell lies convincingly, adapt to his surroundings, and gain the confidence of people. Max is handsome, quite charming, and still young—perhaps too young to be a vicar in some villagers’ opinion—and single. These traits have served him well when settling into his new parish and the affection of his parishioners while also provoking the village women to compete for his affection. For Max, his role in the Anglican priesthood is the first where he does not have to act.

Nether Monkslip’s idyllic landscape has thrived in near isolation from the rest of England because “depending on the humor of those who ran the train” the village is off the beaten track. Plus the economic self-sufficiency of the villagers—most of them are “newcomers” which could be said of anyone who isn’t a native of the village—is full of various cottage industries, many of them started by those who escaped London and other urban jungles. However, these urban-flight refugees were savvy enough not to just market their wares to the area at large but also on the Internet.

This has helped because “[t]he villagers quickly had discovered that city dwellers would pay almost any price for a product labelled ‘organic’ or ‘handmade.’”

Village life in Nether Monkslip may be an example of a smooth transition from one century to the next, but it still retains and observes its traditions, two of them being the Harvest Fayre and the Women’s Institute. Over the years, these two institutions have formed a bond closer than that of conjoined twins and one cannot be thought of without the other. In a place like Nether Monkslip, it is one of the few choices available to the womenfolk as a source of socializing; the women go to the WI and the men go to the tavern.

But the WI has suffered from having a stodgy image and in need of a revamp. It would be an oversimplification to call the Women’s Institute the grown-up version of the Girl Scouts, but the WI’s purpose was originally (according to its official website) “to revitalise rural communities and to encourage women to become more involved in producing food during the First World War.” The hit movie Calendar Girls is referenced more than once in Wicked Autumn as the secret goal that the women in Nether Monkslip aspire; however, there is a big obstacle in the way of progress.

The woman in charge of the WI is Wanda Batton-Smythe, a woman as bombastic as her double-barreled surname. Any villager who has dealt with her would admit to feeling as if they had been beaten with a baton. Wanda is a master at bending people to her will “in the name of charity” and she has held the village together (in her estimation) with an iron grip. Wanda may not have any friends, but she gets things done.

The annual Harvest Fayre is the seasonal showcase bringing in people from miles around and Wanda is in her element delegating, ordering, humbling, and humiliating her minions to do whatever it takes to make “her” fair run perfectly smoothly—that is until Max and another conscripted volunteer find Wanda dead in the Village Hall on the day of the fair. It is easy to compare Wanda to Hyacinth Bucket from Keeping Up Appearances thus making her an obvious (if not deserving) victim. Regardless, the entire population of Nether Monkslip comes under suspicion and Max finds himself backsliding into his former life as he discreetly hunts for the killer.

At the heart of any good mystery is the trail of clues that lead to the killer and the various leads and red herrings along the way. The murder of Wanda Batton-Smythe is a classic “locked door” scenario where the victim is found alone, dead, and with no obvious way for a killer to get in and out undetected, and the method used to kill her is just as clever. There are many threads to weave in a mystery novel, especially when there is such a large cast, and this means multiple viewpoints. Sometimes the head hopping in Wicked Autumn can be awkward to follow and a distraction and other times it flows smoothly. At least the storyline doesn’t rely on the meticulous knowledge of train timetables or knowing the exact minute when something did—or did not—happen leaving the reader wondering if they are coming or going.

Because there are so many suspects, the reader will forgive the amount of repetitiveness required in telling the tale in order to establish alibis. Yet, the plotting of Wicked Autumn, where the reader is being introduced to an entire community, does make it easy for the reader to wonder if all clues have been revealed or will it be like a Scooby-Doo mystery where Fred, Velma, Shaggy, and Daphne finally share some vital detail kept obscured from the viewer. By the time everything is established, there are few chapters left. Fortunately, all is revealed.

Wicked Autumn has most of the hallmarks of a traditional English cozy mystery, but there was something missing that would have really sealed this as a good example of a cozy modeled from those from early 20th century and that is a map of the village—or at least the crime scene; however, this review stems from reading the advance readers’ edition, and this edition may or may not reflect the final form that will be sold to the general public. Perhaps the publisher or Malliet didn’t feel it necessary, which is fine.

Wicked Autumn starts with its listing of the cast of characters like many other books in the classic style, but the inclusion of a map or maps would have been a nice addition to really complete the “look” and create a classic, cozy, total-immersion experience as well as ground the reader into the village of Nether Monkslip.

Wicked Autumn is the first book of a new Max Tudor series by Ms. Malliet. Although the book ends with a very intriguing set up for life in Nether Monkslip after Wanda, it doesn’t provide a clue as to what the next mystery could be, which is a shame, for as a result, Wicked Autumn works as a tidy standalone novel—but one that doesn’t necessarily motivate the reader to read the next installment featuring Max Tudor et al.

Nevertheless, Wicked Autumn takes the traditional English cozy mystery and plants it firmly into the 21st century by introducing a group of characters that retain those classic quirks and eccentricities but are remarkably modern at the same time.