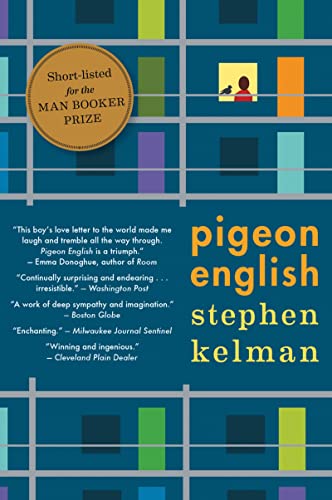 Harrison “Harri” Opoku is 11 years old and comes from Ghana. He, his mother, and older sister Lydia have been in London for only two months at the start of Pigeon English, and Harri is quickly adjusting to life in the UK—not just English customs but its language as well.

As Harri sees it, “In England there’s a hell of a lot of different words for everything. It’s for if you forget one, there’s always another one left over. It’s very helpful.”

Pigeon English is told from the point of view of young Harri, and as such the voice and tone and structure of the story resemble that of an 11-year-old boy. Harri’s voice shines through, not just in the words he defines (“Bollocks are just the same as nuts,” or “Piece of cake (that’s what you say when something was easy)”), but there’s still enough London slang spoken in the narrative to make it all sound genuine; terms such as bo-styles, vexed, hutious, brutal, ironboy, and the every-present dialectical add-on, innit, which translates to isn’t it.

The Opoku family now lives on the ninth floor of Copenhagen House, one of three council towers (the others being Luxembourg House and Stockholm House), given deceptively colorful names by the government—as if all it takes is a pretty moniker to disguise the learned helplessness and hopelessness to be found underneath.

Harri is the man of the house until his father, baby sister Agnes, and grandmother Ama can afford to make the trip to join them. Harri takes his job seriously and will do anything to keep the evil away from his family—even if it means facing evil himself. Harri looks up to his father, and when they have a chance to talk on the phone it means a lot. “Papa’s voice was smiling. I love it when his voice is smiling, it means you did good.”

Not long after their arrival, the murder of a young boy shakes up the neighborhood. Harri knew him but they were only “half friends” because the victim was a few years older and went to a different school. The victim was stabbed outside a fast-food joint for what looks like no apparent reason. The police are stumped and seeking witnesses, but no one dares to come forward. Likely suspects are to be found in the Dell Farm Crew (the DFC), a gang that not only “owns” the housing estate but whose members go to school with Harri and his sister Lydia.

Harri has two best friends. There is Jordan, who is Harri’s best friend outside of school, and then there’s Dean, Harri’s best friend in school. Jordan has been expelled for kicking a teacher, and both he and Harri are being “tested” by members of the DFC to join the gang. The DFC don’t test Dean because he’s white and “ginger.”

The death of the young boy is constantly on Harri’s mind. Together with his friend Dean, who is the expert because he watches all the crime shows, they become their own CSI team. They start by looking for suspects at the young boy’s funeral because there’s a list of suspicious reactions that signal guilt, things like “ants in your pant, talking too fast...uncontrolled gas (farting a lot).” With their list of traits, a pair of binoculars, and a roll of clear tape, Harri and Dean set forth to find a killer.

Pigeon English shows how kids, even sensitive ones like Harri, process heavy subjects like death, violence, sex, and gangs.

Harri is a friendly, sensitive, inquisitive young boy. After only being in England for a few months, not only does he have several friends and a girlfriend at school, but he’s also made friends with a pigeon that visits his window ledge now and again.

Harri’s naive outlook versus his lessons about the hard realities of life flow together almost seamlessly. Life may have been “simpler” in Ghana where happiness could be easily found in the natural world and the community, but even though he is living in a London urban jungle, Harri is still a child full of innocence. As his aunt’s thug boyfriend Julius advises, “. . . stay good for as long as you can. Just stay the way you are.”

Yet the biggest danger in Pigeon English isn’t the atmosphere of poverty and violence but something that starts long before the physical violence manifests, and it starts in a place so innocuous that it is often unnoticed or just plain ignored. That danger is peer pressure. Where is the most common place to find peer pressure? At school, or, to be more specific, in the schoolyard. Yet peer pressure, especially if it goes unchecked, goes beyond the schoolyard, beyond childhood, even affecting adults sometimes to the point that it will determine life or death.

Harri has to deal with pressure from the DFC. His sister Lydia faces similar issues with her friends Miquita and Chanelle. Even his mother and his Auntie Sophia find themselves having to do things they would rather not because there is no other option for them.

Death for a child can be hard to understand and process. If this were a novel from an adult’s viewpoint, the plot (and the pace) would move more quickly (if not linearly) leading to the whodunit. But for Harri and Dean, finding the killer is on a to-do list along with everything else a schoolboy is concerned about, important things like having the right sneakers, or being the fastest runner, or the best goalie. As a result, the story meanders along, but Harri is such a charming and interesting character and narrator, he is forgiven.

For some, the ending of Pigeon English will be disappointing. There comes a point when “keeping it real” and compounding a stereotype becomes the same thing and unfortunately the ending reflects this. Author Stephen Kelman could have created an ending as creative as the rest of the book while still providing a thought provoking read that retains its plausibility; however, the book does include a short interview with the author as well as a discussion guide giving the reader a chance to debate not just the ending but the other issues raised in Pigeon English. Perhaps this insight will make the ending justifiable—or not.