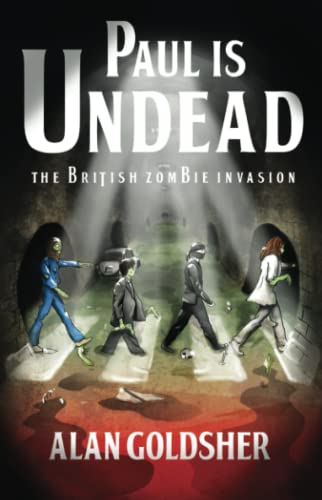 Take every bit of fact, fiction, or myth uttered about The Beatles as a group or as individuals and throw it aside. Paul Is Undead has rewritten history in such a way that is almost convincing enough to be gospel.

John Lennon has three things to cope with: he’s talented, he’s ambitious, and he’s a Homo Coprophagus Somnambulus—a zombie. This trio of characteristics play a significant part in John’s goal to get to “the Toppermost of the Poppermost” and be in position to dominate the world. He knows he is to walk the earth forever so he needs a group of mates to hang with in the form of a killer rock ’n’ roll band.

But before going into the birth of The Beatles, it is important to understand the birth of the zombie, or in this case, the Liverpool zombie.

Stemming from its history as a hub of the slave trade, Liverpool is also believed to be the point of entry for the original nzambi (suspected to hail from Tunisia) credited for creating the first generation of English zombies in a manner that became known as “The Liverpool Process.” This gory, seven-step procedure can be seen as a type of lobotomy requiring a bite in the neck and a very, very long tongue.

Liverpool Process zombies are the hardest to destroy, but they also retain more human-like qualities such as an appetite for human food, and the males have the ability to produce “dustmen.” Is it any wonder that when Liverpool zombie John Lennon requires his bandmates to join him in eternal life by going through the Process that The Beatles eventually do possess the world in what George Harrison calls “the Mania”? After a few false starts to make his band of zombies, John Lennon finally meets Paul McCartney.

Paul is not the walrus, Paul is undead, handpicked by John, and turned into a zombie by him because of Paul’s talent and passion for music. Once the Lennon/McCartney partnership is formed and their haunting harmonies hit the streets, the world is put on notice that trouble is coming.

George Harrison wants in but John says he’s too young so it’s up to Paul to make it right. It is also Paul who turns George because John refuses to zombify someone that young. But in order to convince the living that they are acceptable blokes and not monsters out to eat the brains of the living, they need someone in the band who is actually still alive and strong enough to protect them from themselves. Enter Ringo Starr, Seventh Level Ninja Lord. And Ringo is going to need all of his skills for what lies ahead. The band is now complete, and John’s motto is: “all for zombies and zombies for all.” Except Ringo; Ringo is ninja—but he’s one of the band so this blood pact applies to him, too.

Speaking of the band, there are flashes of the psychology that makes up a typical rock band, and everyone has their role to play from over-the-top frontman to the quiet spiritualist. For example, it is no wonder that the drummers come off as the only sane, grounded members of any rock group. Ringo, as a Seventh Level Ninja Lord, keeps the rest of the boys out of trouble as best he can. Everybody loves Ringo and wouldn’t want to hurt him for anything. Not like anyone would be fast enough to lay a finger on him anyway. And when he and Stones drummer Charlie Watts bump into each other at a throwdown between the zombie Beatles and zombie hunter Mick Jagger, their sanity during the proceedings just supports this argument.

Unfortunately, working with or being a fan of The Beatles can be deadly as documented in the events that happened in The Cavern Club, Shea Stadium, and during the Sgt. Peppers studio sessions. But the reader and Beatleologists will also get a whole new perspective on the “Beatles vs. Stones” debate, the infamous “butchers” album cover, Yoko Ono, and what really happened with (and to) Maharishi Mahesh Yogi.

But perhaps one of the more amusing victims of the mostly-zombie band is that of the aggrieved Rod Argent, human, and leader of the band The Zombies. The scandalous escapades of the zombie Beatles have totally wiped out any attempt at legitimacy, acceptance, and respect Argent could hope to get for his band.

With a growing number of “zombified” classics hitting the market, Paul Is Undead may seem like a weak attempt to jump on the zombie craze bandwagon with a modern tale, but to pass by this book would be a mistake.

Alan Goldsher does something that many writers seem to pay little attention to these days and that is making every participant vibrant and different. All of the players in this mocumentary have individuality, and they recollect events in their own way. Although taken from many factual references, at times it is easy to imagine that this could have happened because Goldsher has captured the voice and the attitude of everyone in this book whether they have a major role or a cameo.

Not only that, but Goldsher has arranged his novel so that it reads like a documentary being watched on television or in the theatre. He directs the narrative so tightly and with such skill that the only thing missing is a literary equivalent to the Ken Burns Effect. This extended “interview” cuts from person to person, giving multiple perspectives of the same event that is seamless, and the results are both suspenseful and comedic. But Paul Is Undead does not read like a television transcript, it is literary cinematography.

Paul Is Undead has prompted a response that no book has ever done in that it caused this reviewer to laugh hard enough to pull a muscle. Which muscle exactly will never be revealed, but Goldsher could go on a quest similar to the one chronicled in this book and find out how many others have injured themselves from reading this hilarious work.

Reviewer Zetta Brown is the author of Messalina: Devourer of Men and a second-generation Beatles fan.