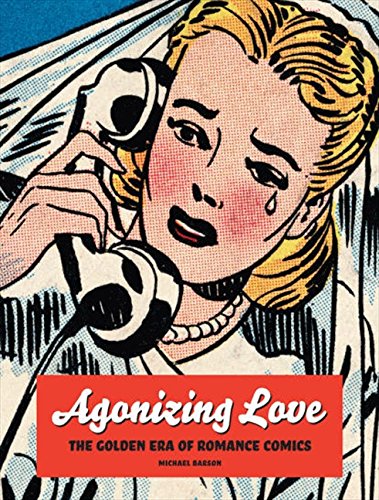 The year is 1947. America is basking in the afterglow following the successful end of World War II. Life is simple and so is the entertainment, but Americans had changed and so had their tastes. Americans needed something to help pass the time for the next several decades until the Internet and “reality” TV comes along. After so many years of war and strife and rations, what could fill the void?

Two men, Joe Simon and Jack Kirby, creators of the superhero Captain America in 1941, flipped the script and were to become the creators—the fathers—of the romance comic with their creation of Young Romance in 1947.

They took their idea to Crestwood, a small publishing house, which only goes to show the importance of small, independent publishers because they are usually willing to take chances the big dawgs won’t (and end up changing the world) because by 1949—a span of two years—there were nearly 150 different romance comics competing with the original Young Romance as other publishers jumped on the bandwagon. But by 1977, the wheels of the wagon train had definitely fallen off.

This is just some of the vital information Michael Barson imparts in his introduction to Agonizing Love: The Golden Era of Romance Comics. The book is divided into five sections covering the states of Bliss, Jealousy & Betrayal, Despair, Marriage Hell, and Class Struggles.

For Mr. Barson, the purpose of his book is to illustrate the “wonderful covers, key stories—or both” that were found in select comics covering a period from 1947 to 1957, and he has compiled the book using comics from his personal collection.

Mr. Barson reveals how the popular themes found in romance comics included “greed, narcissism, class struggles, and prejudice (this last a Simon and Kirby speciality that most other publishers steered clear of).” The stories are meant to be a bit more sophisticated than the classic love triangle and class struggle found in the typical Archie comics between BFFs and arch rivals Betty and Veronica. The issues addressed in romance comics were on a larger, more emotional scale and touched on adult issues rather than the high school hijinks of Archie and the Gang.

Romance comics were modeled after the confessional-style magazines that were popular at the time and could be considered to be the chaste older sibling of Penthouse Letters. Mr. Barson quotes from Joe Simon’s autobiography how each issue contains tales “supposedly told in the first person by love-smitten teenagers.” In addition to these object lessons, the romance comics provide advice to the lovelorn from what author Barson notes as being “presented by the often fictional house psychologist.”

Yet, for people new to the idea of romance comics, it leads to speculation about the people who wrote these stories targeted to women. But with dialogue like: “But why, Joe? What’s wrong with our love?” perhaps it is best that the guilty stay anonymous. Could it be that all (or at least a majority) of these stories were written by men, and that girls and women were really being groomed with ideas about womanhood mainly from the male point of view? In post-war America, Rosie the Riveter was told to return to hearth and home and let the men return to the work force. Perhaps the popularity of romance comics provided an entertaining way to ease the transition while smoothing any ruffled feathers.

The full stories reproduced in Agonizing Love have titles that say it all: “Mother’s Boy”, “With Hate in My Heart,” and “Love Conquers Bigotry.” Most are examples of stories being told from the female point of view, but there are a few told from the male perspective like “Behind the Romantic Curtain.” Apart from stories, Agonizing Love contains some of the advertising, quizzes, and other filler items the comics had. Sort pieces with titles like: “Will you be a BRIDE or an OLD MAID?” or “Are You Ready for Marriage? A Game of Make-Believe” where the first sentence answers the question: “Of course you want to marry!” Other colourful tidbits are peppered throughout the pages where Mr. Barson adds quotes from celebrities like Mae West, Zsa Zsa Gabor, Elizabeth Taylor, and even Charlton Heston.

Another reason Agonizing Love is a treat is because of the prime examples of comic book art it contains. During the 1940s and 1950s it was not uncommon to see couples wed immediately after high school or soon after reaching the age of majority, but even so, these albeit young couples look remarkably mature and not the type anyone would assume to be riddled with teenage angst—at least until they start speaking.

It is the artwork that really encapsulates the era with regard to fashion, mindset, and even language. For example, no one goes “steady” anymore. Plus, unlike typical comic books where characters are stylized so much that the only difference between boy and girl is gender and hair color, the “characters” in these romance tales are unique because they are not part of a series or serial. Each person in these one-off dramas is different, and while the quality of the illustrations may vary depending on the comic, it would be hard to match any two people.

The romance comics cover art alone provide a sense of variety that was uncommon to comic books. Some covers are fully illustrated, others are photo-based, and some are a combination of illustration and photography, but perhaps the one thing that could be considered homogeneous is the names of the various romance comics that were available.

To demonstrate the boom in romance comics in the early days of the genre, Mr. Barson points out the popularity of certain words in the titles. Obvious words include “my”, “romance”, and of course “love”. But in a brief section called, “My Oh My: Why Love Comics Feed Our Inner Narcissist,” Mr. Barson really illustrates how the romance comic market exploded and how there was very little to tell the difference between them. For example, between 1948 and 1949 there were three separate comics with titles My Love, My Life, and My Love Life. Talk about covering your bases!

Mr. Barson explains that these love comics were being read by a variety of people, including adults. The idea that middle-aged women were just as likely to pick up and read these comics as any pubescent girl may seem disturbing, but it may have been the reason why this genre of comic exploded in sales so quickly and for such a long period of time.

However, like any other business or industry, only the strong survive. Some titles, like Young Romance, stayed in production for decades while others only lasted for a single issue. It was not uncommon for a single publisher to produce several romance comics making them compete against each other while saturating the market. The sudden demise of the romance comic in 1977 mirrors its meteoric rise thirty years earlier, but there is no clear evidence to the cause and Mr. Barson humorously admits that, “the question haunts me.”

The analytical text in Agonizing Love is somewhat scarce because the book is more of a showcase of the actual comics themselves and is not meant to be an academic treatise on the subject. If the reader is looking for in-depth information about the writers, artists, and producers of romance comics, then Agonizing Love would not be the best source to consult. However, Mr. Barson does provide a bibliography and gives a strong plug to Michelle Nolan’s book Love on the Racks where the curious can continue to delve deeper into the topic. Nevertheless, Agonizing Love is a perfect primer to the genre.

Apart from being lucky enough to score actual copies on eBay or a used bookstore, Agonizing Love: The Golden Era of Romance Comics may be the closest anyone will get to these forgotten gems of comic book art and the advice to the lovelorn therein.