Trains and Lovers: A Novel 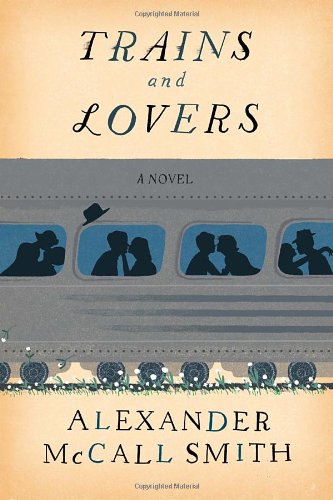 On a fairly ordinary train ride from Edinburgh to London four strangers, three men and one woman end up in a conversation about love and how it can change a person’s life. In this journey of approximately five hours, the travelers reveal the effects of the power of love in their own lives and examine their attitudes toward love.

The first chapter is really a prologue that postulates the theme that love is common and can happen to anybody. It also states that traveling, especially train travel, can be instrumental in bringing love about by exposing a person to new experiences and other people, in which sometimes the memories of people encountered overshadows the experience of the destination.

These two ordinary occurrences, love and train travel, have the ability to create something extraordinary.

The passengers come from various parts of the world: England, Scotland, Australia, America. They are from different economic backgrounds, humble, middle-class, rich. The only thing they all have in common, at least at the start, is that for some reason they are traveling from Edinburgh to London for one purpose or another. It is when they start talking to each other that they discover they all have an interesting story to relate about the power of love.

The differences in their ages shows in their reaction to the stories the others relate. Not in a narrow-minded way, but more in the way how someone with more experience of the world fondly remembers what it was like when they were younger, whereas someone younger may not understand how people could do such things “back then.”

Andrew is from Scotland. He is a recent college graduate with a degree in art history who is on his way to London to take up a new job and to be with his girlfriend whom he met there while doing an internship.

Hugh is English, also in his twenties, and lives and works in Edinburgh and is traveling to try and rekindle a relationship he had with a woman he met on a trip to London. Kay is perhaps in her early fifties, and David is in his forties. Kay is making her way back home to Australia after visiting her father’s native land, and David is traveling home to America after attending a conference.

At first, the four people sat in silence until Andrew breaks the silence and says he sees a fishing boat. This opens the door for others to speak, names are exchanged, nationalities revealed, and the storytelling begins.

Andrew as the youngest is in many ways like a yearling. He hasn’t had a lot of experience in the world and is a bit timid and passive. He’s self conscious about his humble background compared to his girlfriend whose family has money and is well connected. It takes some prodding from a few encouraging mentors to get Andrew to understand that his strength lies within. His experience with love had been dismal until his internship in London. It is fitting that his story about love centers around love at first sight.

Perhaps no one as much as Kay can appreciate the possibility that luck is an important part of life. Her story is more about her parents and the fact that if it hadn’t been for trains, her parents would have never met. Her father left Scotland after the war for the opportunities in Australia. When he becomes stationmaster in a lonely railway siding in the Outback, it is in this desolate place where it strikes him that he could appreciate the company a wife could bring.

David is a college professor and his first experience with love happened when he was younger and involves his feelings for another boy named Bruce. They met during summer holidays in Maine and have stayed friends ever since. David keeps his feelings and relationship private, in part as a defense mechanism against those who would be intolerant. His reticence hasn’t prevented his appreciation for others who love openly and freely, nor has it prevented his finding love. But David does wonder how things could be different if one action, by word or deed, could have led him down an entirely different path in life and love.

Hugh knows the affect of a single deed changing a life forever. He met his girlfriend when he accidentally got off his train at the wrong stop. If he had been paying attention, he would have reached his final destination; instead he encounters a woman he would find mysterious, intriguing, even dangerous.

Hugh also introduces the concept of “moral luck” into the conversation, which basically suggests that a person is the product of their upbringing, and unless they know it is possible to change, they won’t. A good person doesn’t suddenly become bad, or vice versa, unless exposed to the possibility of doing so. Whether a person (or the reader) believes in such a thing as moral luck isn’t the point, but it does get the travelers thinking about how seemingly innocent choices in life have changed their lives forever.

Many readers know Alexander McCall Smith as the author of the much-loved No. 1 Ladies’ Detective Agency series. One reason why that series is so well regarded is because of McCall Smith’s incredible talent for storytelling as well as his ability to pull the reader into the characters and the story. The reader can practically feel, smell, and taste Botswana and believe they are in the company—and mind—of a “traditionally built,” black Botswana woman.

Here McCall Smith weaves the four stories (and viewpoints) in and out in such a way that allows for the tales to develop and the reader to see the reaction and thoughts of the others. Yet despite the title Trains and Lovers and its mission to show how love affects us all, there is something dispassionate in the way McCall Smith treats these four white characters and their stories. Their voices and stories are sterile in comparison. This doesn’t take away from McCall Smith’s storytelling skill, but there is a lack of his usual depth and emotion, keeping the reader at a distance.

The reader actually becomes the fifth traveler on the train but with the luxury of omniscience. In spite of our ability to enter these characters’ minds, their voices are formal. This could be to show that although they are sharing personal stories, they are still strangers. Yet the characters themselves are reserved, even when we are exposed to their inner thoughts, they succeed in keeping most of themselves to themselves.

These four travelers may feel closer to each other and a little more bonded to the human race than when their journey began, but the reader may not feel overly invested in the association. Perhaps this is done on purpose. These stories and these people are not meant to be permanent fixtures in our minds and have marked our psyche, but simply transient visitors that we may remember fondly sometime in the future . . . or not at all.

Trains and Lovers is a short book and an undemanding read. It can be read in the time span of a single afternoon or a train ride between Edinburgh and London, resulting in time pleasantly spent.