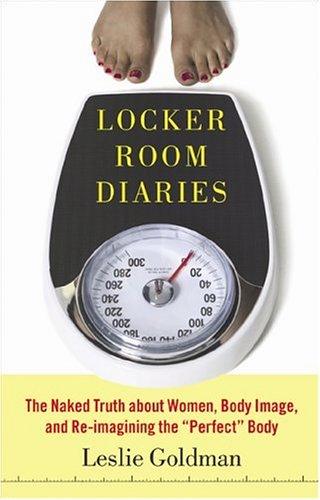 The title says it all, and the book delivers what is on the label. According to the blurb on the back cover, Leslie Goldman, MPH, is a health writer for the American Medical Association. She is also a recovering anorexic.

Locker Room Diaries is written from a first-person point of view, and sometimes Goldman’s “voice” is annoying, as if she is trying too hard to be witty at times. But more often than not, she sounds like one of the girlfriends whom you can easily talk to.

This is a unique collection of interviews conducted by Goldman of the women in her gym and not a simple recollection of her personal views and opinions. The gym Goldman belongs to is co-ed and upscale. She interviews fellow members of the gym and the staff and uncovers stories that are funny, inspirational, sad, and more. She also talks to medical professionals, but it is the views and opinions of the gym members that are so interesting.

Plus, Goldman’s personal experience with anorexia also provides useful insight from someone who has survived but must still deal with her eating disorder. For example, Goldman talks about a woman named Jane who is anorexic. Jane knows it, the staff knows it, but no one can tell her differently. “She’s gonna tell you to go fuck yourself,” warns a gym employee when Goldman suggests talking to her. Jane goes into the gym and works out, daily, for three hours, and has done for ten years. Her anorexia shows not just in her living-skeleton physique (Spandex sags on her body) but also in her dry, brittle hair.

Everyone is shocked when Jane gets pregnant and starts showing, but she does not let up on her regime. Perhaps Jane’s child will be like the little girl Goldman observes watching her mother stand on the scales: “The mother followed her daughter’s gleeful voice to The Scale, where she rumpled her daughter’s hair, giving her a cursory ‘That’s great, honey!’ She lifted her daughter off the scale and then got on herself. In one swift motion, the mother’s face soured and her head dropped. She stepped gingerly off the scale and, without another word, returned to her locker and continued dressing.

And wouldn’t you know it, before I had the chance to ask myself, ‘Will this turn into a vicious, lifelong cycle?’ that little girl climbed back onto the scale, and in a performance worthy of a pint-sized Oscar, imitated her mother’s actions, right down to her exaggerated pouty face. Was she old enough to read the numbers? Probably not.” Or will Jane’s child be like the one who asks her mother, “Mommy, why do you only eat salads?”

Not all the examples related are so disheartening. There are women unashamed to walk around naked in the locker room, no matter their size or age, while other women have developed interesting body contortions in order to change clothes and expose as little flesh as possible.

Goldman subdivides the chapters depending on the topic or interviewee. Here are some examples: “Pimples, Crotches, and Butts, Oh My!,” “Breasts: They Do a Body Good,” “Living Life Large . . . And Loving It,” the list goes on. She covers topics ranging from exercising regularly, exercising while pregnant, age and exercise, and cultural perceptions of weight and body image. As expected, the book spends a lot of time showing how women constantly compare themselves (oftentimes unrealistically) to other women, but it also shows how women can want something that they just will not get because of genetics, including racial makeup.

One of the best parts of the book comes toward the end in the chapter, “Having a Senior Moment: What Lessons Can the Older Generation Teach Us?” Becky is a 91-year-old yoga instructor whom people ask to see proof of her age because she looks decades younger, so she shows them her driver’s license. Becky says: “I believe in focusing on the body, as long as we remember we are not the body; and if you focus too much on the body, you lose what you really are. And what you really are is a beautiful daughter of God. First, realize you are a spiritual soul. The body is a vessel. And that’s what’s wrong with the world today—we’re so interested in the I, the me, that we don’t realize we’re more than the body. We’re the mind and spirit. That’s why I don’t really consider myself an African American woman. Because I believe in reincarnation, I see myself as a Greek woman, an Egyptian woman. So I just think of myself as a citizen of the world, like Socrates.”

Despite the many topics covered, the book does not read choppy or incomplete. There are some themes that could be expanded into their own book, but Locker Room Diaries provides just enough variety to keep your interest without becoming boring.