Eat People: And Other Unapologetic Rules for Game-Changing Entrepreneurs 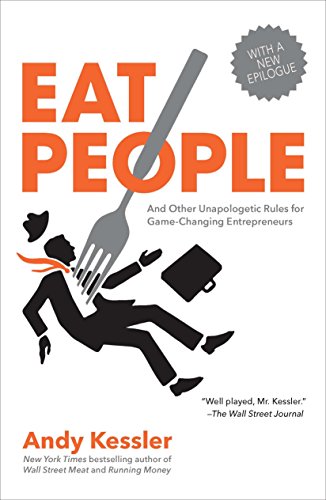 Now, after more than a decade into the new millennium, it is time to start seeing, acting, and doing things from a 21st century perspective. The rate of progress over the last century was more than ever recorded in the history of the human race, and with digital technology, progress will not stop. If anything, change will come faster. In order to face these changes, the willingness to look to the future is necessary, and understanding the need to eat people is one required tool to make it possible.

Andy Kessler provides a baker’s dozen of rules that provide much food for thought in Eat People: Unapologetic Rules for Game-Changing Entrepreneurs. But, foodie clichés aside, Kessler’s message is a wake-up call to those budding or wannabe entrepreneurs as much as it is to the slumbering moguls and managers.

If the concept of eating people is unsettling—and that’s just the title—the rest of the book is bound to rile complacency. Embrace the exceptional. Don’t be scared to “eat people” and eliminate jobs that are counterproductive. In the end, the new jobs created will require more skills. Those people who have been “eaten” may well come out ahead (if they choose) recycled and fit for some other purpose through retraining or by simply moving on and getting out of the way.

Mr. Kessler is an engineer by trade and education, but migrated into the area of finance and is a former hedge fund manager. He has had access to pick the brains of some of the wealthiest people on Earth, but he’s also picked the brains of some of the smartest people. Wealth does not guarantee intellect, as Mr. Kessler admits, but brains will create wealth—if it’s allowed—and there are many things that prevent this, one of them being “political entrepreneurs” and the reluctance to eat people.

After decades of experience, starting from his tenure working in Bell Labs and through the present, Mr. Kessler has observed, time and again, the combination of things that have created wealth, and not just monetary wealth, but things that have gone on to help humanity. Eat People may present an “unapologetic” line of reasoning, but there is still a wee bit of moral fiber to be found.

Using many examples and a bit of wry humor, Mr. Kessler tries to distill some of the complexities found in the areas of economics and high finance. One of these is his preferred working definition of “economy” (as in “the state of . . .”). His definition means “a system that increases the standard of living of its participants.” This is a bit more apt than the clinical “allocating of scarce resources” and other definitions used in Economics courses. But the idea of increasing the standard of living for as many people possible is about as touchy-feely Kessler will get because at some point, to be successful in business there can be no squeamishness about eating people.

Mr. Kessler has developed a name for the next-generation entrepreneur: “Free Radical.” Based from the chemistry concept on how free radicals can be used to create things like energy, Mr. Kessler’s Free Radicals are people who use their minds, skills, resources, networks to create personal wealth while improving the standard of life for others.

He points out that Eat People is in part a response to Rules for Radicals by Saul Alinsky. You don’t redistribute wealth, or soothe your conscious by saying you’re disassembling the machine from within in order to redistribute wealth. You create wealth by creating the means for more people to be productive and raise their standard of living. Give a man a fish, he eats for a day. Teach a man to fish, he eats for life.

There is a bumper sticker that shouts: “Work harder! Millions on Welfare depend on you!”

Not everyone has what it takes to be a Free Radical. Some may be satisfied with being a Server, or Slopper, or Thief; whereas others without the slightest inclination to do a thing will feel themselves justified to be a Slacker or a Taker. In fact, Mr. Kessler has several new names for different types of people in this economic continuum. But perhaps the vilest villain of all is the “political entrepreneur.” And he points out that many of the men deserving to be called a Free Radical in their day became greedy and turned into political entrepreneurial fat cats who set themselves up to be taken out of the game by the next wave of Free Radicals.

A person of any age can be a Free Radical—if s/he knows what to look for—and Mr. Kessler explains what to look for in order to be one. Perhaps the most pertinent example in the book is the one Mr. Kessler gives about Cornelius Vanderbilt. If Vanderbilt were alive today, he’d be the living embodiment of Nike’s famous tagline. He just did it. He didn’t ask permission to undercut the government-subsidized monopolies of his era—he just did it, and as a result, he created wealth for himself and improved the lives of many people. But in the end, he became greedy and vilified as a “robber baron” (and what Kessler reveals about the genesis of this term is enlightening).

But like with all things “radical,” Kessler says to expect criticism. Many of the entrepreneurs examined in his book would later become disgraced and remembered for the scandal they caused (usually stemming from being greedy) rather than the good they provided to people for generations to come. It serves as a warning for the Free Radicals of today, like Mark Zuckerberg, and that they should be careful not to fall into the trap of previous Radicals and find themselves hoisted by their own petard.

For a book that espouses capitalism, free trade, improving the standard of living for as many people as possible and not just a few, Eat People doesn’t come across as having a “political” agenda as such because as far as Kessler is concerned, it doesn’t matter what administration is in power, once government and policy and special interests get involved, everyone gets burned.

Mr. Kessler is not a moralist. “[B]y no means are my Rules the only way to live your life and the only way to focus your career.” And some of the things he suggests may go against one’s personal grain; however, he doesn’t shy away from eco-elitists in telling them “—don’t get holier than thou on me when you are driving your Prius [. . .] Through political connections, you redistributed our wealth to yourself and then for community standing or personal satisfaction, you redistributed it again to some pet cause.” It is one thing to be a Free Radical and create the things to make the word a better place, but it is quite the opposite to criticize when you have done nothing to either create it or produce it.

A person with a mind geared toward economics or technology may be able to pick up on all of the analogies Kessler makes in Eat People and quickly devour the book, but readers who have no direct knowledge of these areas will still be able to understand the key concepts within. Regardless, Eat People: Unapologetic Rules for Game-Changing Entrepreneurs is a worthy read for those willing to move ahead in business and into the future.