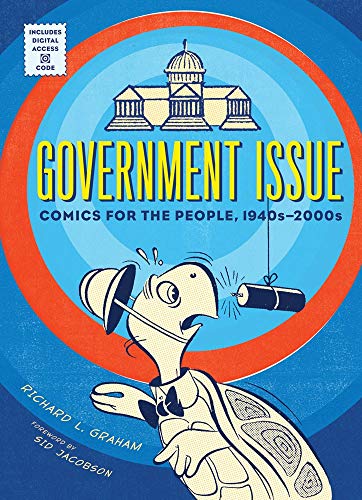 “Government Issue: Comics for the People, 1940s–2000s is a worthwhile retrospective on how government, pop culture, and tax dollars can come together and provides informative reading for comic lovers, historians, patriots—and even cynics.”

The idea of any government using something like comics and comic books to spread its message sounds seditious, but as Richard L. Graham illustrates in Government Issue: Comics for the People, 1940s–2000s the U.S. government continues to use comics in this manner. These comics helped shape the American psyche, and since they are funded by tax dollars, they can be seen as a government service.

Decades before advertising executives created Schoolhouse Rock! as a means to educate youth with cartoons, the U.S. government has been using comic strips and comic books to reach children and adults with various messages and information.

Drawing from his first encounter with a government-issued comic as a child in the late 1970s (a maintenance manual for the Gama Goat jeep), Mr. Graham recalls how reading that comic book not only alleviated his boredom on that specific day, but decades later led to his discovering how that comic represented what has become a governmental publishing tradition.

The comics highlighted in Government Issue are divided into four sections: Ready Then, Ready Now (Comics About the Military); Show Me the Money (Comics About Employment and Economics); Be Prepared (Comics About Civil Defense, Safety, and Health); and The American Way (Comics About Landscapes and Lifestyles). Each section starts with a brief introduction before showing samples. Although the narrative text is very limited, Mr. Graham uses it to provide some interesting history, facts, and trivia about the subject.

As Mr. Graham explains, “The government’s efforts to win public support for its foreign policies are common in American history, but these activities ratchet up when America goes to war.”

In the early 20th century, especially during the world wars, the government was not above utilizing scare tactics. But even the government realized that racism and playing on stereotypes “were too simplistic and misleading and could leave to overconfidence.” It would be very easy to dismiss the government’s use of comics as pure propaganda, but it cannot be denied that the government has used—and still uses—comics to inform.

The importance of victory gardens, civic defense during a nuclear attack, and military recruitment are just some of the issues about which the government produced comics. When the Social Security Administration was formed, comics were used to tell the general public why it was important to get a social security card and to know their rights and benefits.

The U.S. government has always been mindful of the power comics have to educate and has created some of the most endearing and popular comic icons like Smokey Bear (no “the” as Graham points out), Mr. ZIP, and McGruff the Crime Dog to name a few. But GI comics are also used internally as training manuals and operation manuals covering things ranging from weapons and preventative maintenance to explaining government policies such as “Don’t Ask Don’t Tell.”

It would be a challenge for readers of Government Issue not to find at least one recognizable character because during the 1940s–1970s, most major comic book artists and comic book publishers were involved in producing government-issued comics in some capacity at some point.

The comics themselves range in quality, not just in artwork but also in storytelling. Mr. Graham includes examples where the government tries to be “hip” with the same assuredness of a reverend at a rave.

The result is painfully funny, and it is no surprise that a majority of these comics were one-offs; however, some comics were popular and reissued. The FDA published Dennis the Menace Takes a Poke at Poison in 1961 and reprinted it in 1981.

And the federal government is not the only one using comic books. State governments use them to promote—and remind—the public about local industry and natural resources. Ricky and Debbie in Sardineland is an example from the Maine Sardine Council that was originally produced in 1967 and reprinted in 1987.

Comics are not just for kids. Adults are an important demographic as well. Mr. Graham refers to Roland Marchand’s book Advertising the American Dream that mentions an experiment conducted by The Hearst Corporation where they left out the Sunday funnies for 1000 of their newspaper subscribers—880 of them complained whereas only 45 people from the same group complained when the main news section was left out a few weeks prior.

Yet the government used comics to reach the youth of the 50s and 60s to deliver topics in a simplified manner—even scary ones like the spread of syphilis among teens (Johnny Gets the Word) or drug addiction (Teen-Age Booby Trap).

Wertham’s crusade eventually lead to congressional hearings and “[a]fter the dust settled, the comics industry agreed to regulate itself, forming the Comics Code Authority.” This collective, industry-wide, self regulation continued until the last publishers stopped submitting to it in 2010 opting instead for their own, individual rating systems (if any) to indicate appropriate audiences rather than seeking a stamp of approval.

The government never stopped producing comic books despite the medium’s fall from grace with parents and academics during this time. To quote Hamlet, “It is a custom more honour’d in the breach than the observance,” and perhaps the government could be seen as a victim of its own success in this area.

Mr. Graham doesn’t go into great detail on how to obtain copies of comics that the government still produces for public consumption. Mr. Graham himself is an academic librarian at the University of Nebraska-Lincoln, a federal depository library “mandated to collect and make available all publications produced by the federal government. All of them, even lowly comics.”

Government-issued comics are generally free, and if there is a cost, the money goes to whatever cause or department the comic endorses. Mr. Graham does say that the fed offers their comics online for free to educators; however, the average citizen is hardly likely to bother. As a result, the comics that were once given away at banks, hospitals, and a variety of other places are a rarity today.

Fortunately, readers don’t have to troll government websites or travel to Lincoln, Nebraska, to experience these comics first hand. Government Issue not only shows the long history of the U.S. government using comics by providing samples from 1918 on, it provides a QR code on the very last page of the books that 21st century, tech-savvy readers can scan their device of choice over the code “for full comics and animations” of what has been referenced.

Government Issue: Comics for the People, 1940s–2000s is a worthwhile retrospective on how government, pop culture, and tax dollars can come together and provides informative reading for comic lovers, historians, patriots—and even cynics.