The Goat Woman of Largo Bay: A Novel 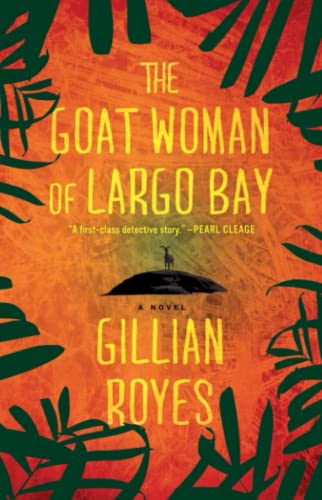 “If the reader has never had the pleasure of experiencing Jamaica or its people before reading The Goat Woman of Largo Bay, s/he will be captivated by a cast of characters as interesting as their names plus a setting to which readers will want to return.”

Set in the coastal village of Largo, Shadrack “Shad” Myers is a father of four, a faithful husband, and a loyal employee. He’s determined to be a good man and set a good example after spending time in Kingston Penitentiary for armed robbery when he was a younger man. Now Shad works for Eric Keller, an expatriate from the U.S.

Originally from Shaker Heights, Ohio, and a former human resources manager in New York City, Eric relocated to Largo in Jamaica to open a hotel and spend his retirement in the sun. Eric achieved this dream and built his hotel on a small peninsula. It thrived until a hurricane destroyed his hotel and destroyed the peninsula.

Now Eric has a ruined hotel on a small island that is only accessible by boat, and the remains of what is now an open-air bar, set on the edge of the cliff that overlooks his devastated hotel, a constant reminder of a dream washed away.

Shad prides himself on his reliability and understanding people by what they drink. This helps because Shad is the bartender and Eric’s right-hand man.

Villages are known for being tight knit and Largo is no exception. The residents of Largo are God-fearing but not entirely averse to seeking help and advice from the obeah man. Nevertheless, it takes a while for newcomers to fit in, and anything or anyone different is treated with suspicion, which generates the rumor mill.

So when it is discovered that a woman has taken up residence on Eric’s deserted island across the bay and has scared off intruders with a gun, the residents are both curious and wary. What woman chooses to seclude herself on an island? Surely she must be crazy.

But Simone isn’t crazy. In fact, she is recovering from a personal tragedy in her own, unorthodox way. Originally from Jamaica, Simone grew up in England and America. Whatever she learned to appreciate about her homeland as a child has been wiped out by her parents’ (especially her mother) determination for their children to have a better life; now Simone is going back to her roots to try and find herself and try to carry on with life.

Shad and Eric worry about her being alone but Eric accepts her as a tenant and allows her to stay. But when Simone’s brother Cameron comes looking for her, worried about his sister’s state of mind, the actions the three men take exposes Simone as a potential risk, not just to herself, but to the lives of everyone on the mainland.

Apart from the Goat Woman, trouble is threatening Largo because this sleepy village, largely ignored because of its remoteness, will play a pivotal part in the upcoming government elections. Their votes are needed to keep the current government in power despite its rumored corruption, lack of effectiveness, and reliance upon “free zones” that allow foreign businesses to exploit the island and its people tax free.

When Shad is approached by Dollar-Bill (formerly known as Doughnut-Boy) a man Shad knew from his days in the pen, to help keep tabs on the political leanings of the village, Shad is dubious. Shad suffers from a nervous stomach that seems to warn him in addition to his natural perceptiveness.

The Goat Woman of Largo Bay may mislead the reader to think that it is a “simple” beach read, but the reader comes to appreciate the flip side of Jamaica that the tourists rarely see and the tour guides gloss over if they address it at all.

Despite the veritable paradise of the island, there’s a lot of ugliness that can be found beneath the surface. Jamaica has problems with unemployment, gangs, drugs, poverty and many other things that can be found anyplace else. Jamaica may be an island entire of itself, but the actions of its larger neighbors can be overbearing and chafe its proud inhabitants. These issues are not touched in a heavy-handed manner but are revealed in a way similar to that of the people of Jamaica itself: subtle but effective. Having a laid-back attitude can cover up a very perceptive mind, and to underestimate this casualness for ignorance would be a mistake.

Shad and Eric portray two sides of a society where deference is still given to white foreigners but the pride Jamaicans have in their ability and freedom to determine their own way of life makes sure that deference does not turn into subservience.

Shad has dreams and goals and he knows that he can learn a lot from Eric, whereas Eric knows he still has a lot to learn from Shad. Each seem to want what the other already has and at times these values clash making it necessary for a compromise to be found. This theme of cooperation runs throughout the story.

Sometimes authors have difficulty creating believable characters that are the opposite gender of the author and, as a result, the characters turn out shallow. This doesn’t apply to Gillian Royes who seems to tap into the psyche and thought processes of men and women and convey this so that her characters are believable and well developed.

This helps because the story unfolds in multiple viewpoints but the voice and characterization is strong and clear allowing the reader to follow these shifts smoothly. Plus, Ms. Royes is not afraid to give her characters flaws and regrets that they know they have and they struggle with, whether their struggle is to improve or accept and cope.

The writing in The Goat Woman of Largo Bay is poetic at times and the plotting of the story is more literary in its approach but still leads to a tense climax that will have the reader engrossed to the end.

Botswana has The No. 1 Ladies’ Detective Agency and Precious Ramotswe, and now Jamaica has Shad Myers. If the reader has never had the pleasure of experiencing Jamaica or its people before reading The Goat Woman of Largo Bay, s/he will be captivated by a cast of characters as interesting as their names plus a setting to which readers will want to return.