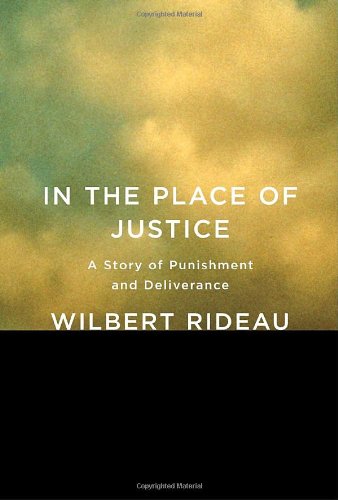 In 1961 Lake Charles, Louisiana, a 19-year-old black man named Wilbert Rideau robbed a bank. His plan was to get the money, lock the employees in the vault, catch a ride home so he could pack, and be on the next bus to California or anywhere that wasn’t the segregated South.

At closing time on February 15, Rideau robs the bank located in a tiny strip mall situated a few doors down from where he worked in a fabric store. During the robbery, a phone call throws Rideau off his stride, and instead of putting the employees in the vault, he improvises and takes the three white employees—bank manager Jay Hickman, and two tellers, Julia Ferguson and Dora McCain—hostage by forcing them all into Julia Ferguson’s car and driving out of town where he would then let the hostages out and drive away. Before leaving, he instructs Hickman to get his coat because “you’re going to be cold walking back to town.”

Ferguson drives around “white” Lake Charles, trying to follow Rideau’s instructions. But this is an area he is not familiar with, so he immediately loses his bearings. It being the month of February, it was early evening but already dark. Rideau directs Ferguson down a road and they pull over. McCain opens the door and starts to run, followed by Hickman, and then Ferguson.

With his plans going hopelessly wrong, Rideau starts to fire his gun in a panic. His hostages scatter. Hickman heads for the swamp, the women continue to run as Rideau empties his gun. Both ladies fall down. Did Rideau hit them both, or are they playing possum? He sees Ferguson struggle to her feet so he runs over and stabs her.

Rideau is quickly captured, and with the quick thinking, and perhaps mercy, of the sheriff who caught him, he and his deputy protect Rideau from the lynch mob already waiting for his arrival at the local jail.

The white citizens of 1961 Lake Charles, Louisiana, didn’t get the opportunity to physically lynch Rideau, but the U.S. criminal justice system made up for it . . . several times over.

There were blatant miscarriages of justice in the handling of Rideau’s case (as seen from actual court records) that will leave the reader amazed that such things can happen in America. It all starts when Rideau finds himself in what he believes is an interrogation room filled with bright lights that blind him when he is questioned by the sheriff. It is not until much later when he is told that his interrogation was filmed and those bright lights were cameras broadcasting his interview on live television. It is no surprise that Rideau is quickly tried and sentence to death in Louisiana’s electric chair at the state penitentiary in Angola, America’s bloodiest prison.

Amazingly, there were many factors that allowed Rideau to survive being sentenced to death as the gunman of an interracial crime in Jim Crow South including trials, and retrials, and various state and federal rulings putting a halt, at least temporarily, on executions.

Another reason for his survival was his status as a death row prisoner that kept him isolated from the general population. Rideau was 5’7” and 115 pounds when he first arrived. He would have been an easy target for prison predators. Even when he is eventually released into the general population, his condemned status protected him, and when his sentence was commuted to life, by that time he had risen in status through his own accomplishments as a model prisoner.

Rideau does not try to deny what he did or rationalize it away. “Look, I’m guilty [ . . . ] and like most of these guys here, I’m not looking for excuses.” Yes, he came from a violent, dysfunctional home, had a limited education (he completed the eighth grade). But he always acknowledges that none of this is an excuse for killing a person. He understands that the way his teenage mind attempted to solve his problems was not the right way and that his rash actions destroyed one life and damaged many others.

Early in his confinement he makes a promise not to let the world define him as a “criminal.” He resolves to put a sense of purpose in his life, while he still has one, and to help people in whatever way he can.

Rideau draws a clear distinction between his generation of prisoners who understood that they must accept responsibility for their actions and the modern inmate. He says, “today’s inmates are better schooled but more stupid” as a generation that “blame[s] everyone and everything else for their frustrations, anger, and problems.”

Appreciation for reading and writing eventually leads him to become editor of The Angolite prison magazine, a periodical that helps bring about many prison reforms in Louisiana to benefit both the prisoner and those who guard over them. Angola is by no means a day camp, but it is definitely a community where prisoners and prison employees must live together.

“If you don’t want people to see what you’re doing, then maybe you shouldn’t be doing it.”

These are the clarion words of the late C. Paul Phelps, former warden of Angola, friend, mentor, and father figure to Wilbert Rideau—who dedicates his book to Phelps. This is a philosophy that not only brings freedom of press and freedom from censorship to The Angolite in the 1970s, these are these words Rideau will live by. Rideau learns this as he studies journalism: report the facts and the truth. But this kind of freedom of the press is no longer allowed in Angola today, leaving one to wonder what truths are now being hidden.

Louisiana is a state that based its justice system on the belief that everyone deserved a second chance. For years it was customary for a life sentence to be considered for executive clemency after ten years, six months. This is no longer the case today, but for years, that kind of incentive made inmates at Angola strive to hard work and to become model prisoners. Prisoners who caused trouble usually got dealt with by other prisoners, rather than by the prison administration. Inequities affect prisoner morale regardless of race.

Rideau gives many examples of how prisoners at Angola learn fast that good behavior is rewarded and bad behavior severely punished. But the only way to make things tolerable for both the incarcerated and the prison administration is not only to be firm, but fair.

This is not possible if disciplinary actions are meted out irresponsibly. Rideau explains that when prisoners have the incentive of earning freedom through good behavior and discipline, they will become model prisoners. If you take away all hope, in the stance of being tough on crime, even the model prisoner will rebel, revolt, or commit suicide. Rideau recounts touching stories about many prisoners, black and white, showing what kind of cruelty and compassion can be found behind bars.

The interracial nature of Rideau’s crime, its location in the Deep South during segregation, and political posturing all contribute to the amount of time that Rideau spent behind bars despite hundreds of other more violent offenders—black and white—being offered clemency. Rideau’s accomplished tenure as editor of The Angolite was both a blessing and a curse. He remained in prison despite being declared “the most rehabilitated inmate in America.” Rideau’s achievements in prison and beyond gave him a high profile and thus kept him in the minds of those who remember the crime and all of the court cases that followed.

Perhaps one of the biggest ironies is that for the most part during his incarceration, his most staunch supporters were white—just like his most fierce opponents. “Many of them stuck by me for decades,” he writes. In actuality, there were two pivotal incidents in which the betrayal of another black man would keep Rideau behind bars for years. However, the majority of his black supporters do not come until near the very end.

Like the late Johnnie Cochran said while part of Rideau’s defense team, “All Americans deserve to be treated equally in the justice system.” If the racial aspects that kept Rideau behind bars for over 40 years don’t disturb the reader, the precarious way that those in power treat things that Americans hold dear to their hearts—freedom, rights, justice—should. There is a question about civil and constitutional rights. If the arbitrary granting, or revoking, of these rights can happen to prisoners on American soil in the way certain laws come to pass, what is to stop it from happening to law-abiding American citizens?

In the Place of Justice is a fascinating but disturbing read. It is as much about what life is really like behind prison walls as it is about Rideau’s crime and punishment. This is not Hollywood, and Wilbert Rideau has experience that no other politician or critic has: 44 years in prison—as a prisoner.

Among myriad issues this book raises, In the Place of Justice will make the reader think hard about prison reform, the death penalty, parole, victim’s rights, prisoner’s rights, the U.S. justice system, racism, politics, and even prisons-for-profit legislation.

In the Place of Justice: A Story of Punishment and Deliverance may or may not change opinions, but it will make it hard for the reader to blithely accept what they are being told without taking both sides into consideration.