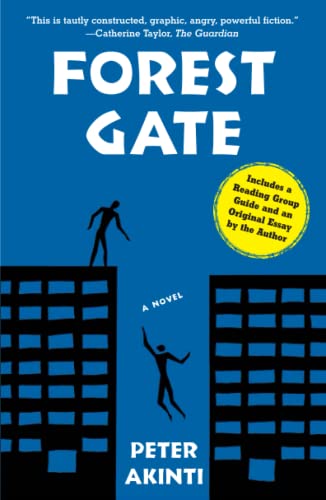 Forest Gate is a novel revealing the true cost of stereotypes and cultural propaganda and how everyone is guilty of this new type of blaxploitation being used by politicians, media—especially pop culture—even black people themselves. As a result, the accepted “truth” of urban black communities is either hyperbolic or romanticized, and these stereotypes are fatal to the ones being cast in these roles.

Forest Gate is located in East London. It is a council estate or what would be termed “the projects,” “the ghetto,” or “the ’hood” in the United States. Even the name Forest Gate suggests it is both a prison and a haven for its residents, which it is.

The novel centers around two immigrant refugees, eighteen-year-old Armeina (Meina); her sixteen-year-old brother Ashvin; and his friend, seventeen-year-old, London-born James Morrison. All three have seen and adapted to more than anyone should be forced to endure.

Living in war-torn Somalia had been a way of life for Meina and Ashvin, but they lived in a loving household with their parents, if not in total safety. Like everyone else in Somalia, they adapted to survival, enjoying the natural beauty of the land and the relationships that can be had while dodging bullets and kidnappers. Their mother was raised in Scandinavia, her father having fled Somalia years earlier. She has a doctorate degree in art history. Their father Mohamed is an outspoken political activist, professor, and reporter. He believes that Somalia will rise above its wars. Both parents have spent time away from Somalia only to return. Ironically, their love for each other and their country leads to their deaths.

When Meina and Ashvin’s parents are murdered by Ethiopian men “wearing uniforms” as a result of their father’s activism, the kids are taken in for a short time by an aunt who promptly pimps Meina out under the guise of aroos fahdi, an arranged marriage, for the sake of gaining dowries off the men. Meina gets eighteen offers but not all produce dowries, and within the space of approximately two years, she is married off six times to men who do.

Ashvin, devoted to his sister and her self-designated protector, devises a plan to save her. He disguises himself as a blind beggar because “blind beggars were believed to have the power of deflecting misfortune.” He then predicts bad luck on the home unless the young bride is cast out. Ashvin is the tragic, yet key figure in the tale. Unlike Meina who returned home to the carnage, Ashvin witnessed his parents’ murder. It scars him emotionally and physically in a way too awful to wish on any person, let alone a child. It turns him from a smiling, curious young boy who recites poetry and dreams of being a doctor into a time bomb full of repressed anger and hate.

Meina and Ashvin are taken away from their aunt by their father’s white, English friend, Mr. Bloom; they arrive in England under his guardianship. His name suggests a new, fresh start, but the siblings soon learn that life in England in many ways is harder than it was in Somalia. They are now in a society where racism, hatred, and suspicion are much more blatant and soul destroying. This reality is too much for Ashvin to take.

James Morrison is the youngest child in a family of drug dealers. He hates his surroundings and is embarrassed by his family to the point of being disgusted with life. He has five older brothers (who are referred to only by number), and a crack addict for a mother. More than once James has to admonish others: “Don’t reduce me like that.” Thoughtful and familiar with the works of James Baldwin and Langston Hughes, he longs to be seen as an individual with meaning and a place in the world. He cannot stand how people romanticize “ghetto fabulousness” or the way these stereotypes create a dehumanizing, self-fulfilling prophecy around him. He is fed up by the politicians and media that do little more than fuel the propaganda that breeds racism and hatred within and outside black communities in general. When he meets Ashvin at school, they recognize their common bond. They form a suicide pact. Ashvin succeeds, but James survives to live another day in Hell. Ashvin’s final act serves as a catalyst that will both ruin and save lives.

Her brother’s death brings Meina and James together to try and make sense of it all. Meina, at first, is angry at Ashvin for not having the strength to tough it out, but in the end, it spurs her on to live when the rest of her family couldn’t—as well as to help James cope. But will she and James survive in a society where there is a definite system—political and cultural—to keep them down?

Author Peter Akinti draws on actual people and events to help create his characters and to depict the world that is Forest Gate. One such example is the tragic story of Damilola Taylor who shares a similar existence–and fate–of Ashvin. This realism is another aspect that makes the novel so poignant. Several themes run throughout the novel: racism, classism, greed, selfishness, displacement, immigration, refugees, and black-on-black crime. Akinti could easily turn this into an epic novel. Yet Forest Gate is a short book packed with concise, stark prose.

On the technical side, there is conflicting information about the ages of Meina and James in the beginning that finally becomes clear. Their voices are so mature it is easy to forget but important to understand that they are teens and not “full-grown” adults, chronologically speaking. There is also a disjointed approach to the narrative. Most chapters are written from the viewpoint of Meina or James, while others are written through the eyes of an outside observer. Taking a lenient judgement on this could be seen as a clever and powerful literary device creating an emotional tug-of-war. At one moment, we are privy to their intimate thoughts and the next we are shoved back as if we were allowed too close and forced to back off because for people like Meina and James, you never know whom you can trust. Nevertheless, this head hopping can be confusing, choppy, and can detract from the overall flow of the story.

Is Forest Gate another angry novel about angry black men? Yes. But the point is to go beyond the surface and the stereotypes. Despite the bleakness, there is still hope. As one elderly man tells James, “You would not be a black man if you were happy all the time in life. When there is drought you look for rain. Maybe you never find it but you do not stop looking. This is life, my friend.”

Forest Gate taps into the fears and prejudices of everyone—regardless of race or class. Introspection is not an option.