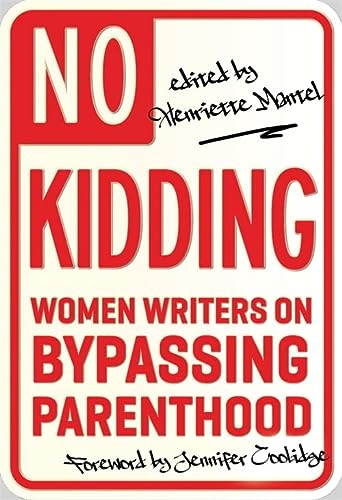 In this day and age of play dates, child friendly zones, and political correctness, if a woman chooses not to have children, does that make her a social pariah?

When a man has no wish or desire to have children, he is excused as being a free spirit or dedicated to his career.

Women are often made to feel guilty about their choice. In No Kidding: Women Writers on Bypassing Parenthood writer/actress/director/producer Henriette Mantel and 36 other women writers share their viewpoints on why they chose not to have children and the effect it has had on their lives and the people around them.

People automatically assume that if a woman doesn’t want to have children, she must not like children. Many of the essays in No Kidding prove this assumption to be a myth, a statement casting a broad generalization when the truth is as varied as the women making the choice.

These 37 women give 37 reasons why they do not have children. Some of the reasons include health issues, addiction issues, abandonment issues, sad childhoods, happy childhoods, busy lives, fun and adventuresome lives, lack of a suitable partner, fear of commitment, and more.

Henriette Mantel’s essay even talks about the effects of divorce on children and grieving more for the loss of the relationship she had with the daughter of her ex than the man himself.

But if it were possible to ask every woman who doesn’t have children why they don’t, there would be millions (billions) of variations and reasons not even represented in this book.

Another very interesting point of No Kidding is how some of the women have had to develop responses to the question: Do you have any children?

Men and women both get awards for insensitivity when it comes to not accepting (or believing) women who answer in the negative. Why can’t people accept the fact there are women without kids and have no problem with it? Why is it even an issue? Whose business is it anyway? Full points go to the person who can give an answer that everyone can agree on.

As Bonnie Datt explains in her essay, she has even incorporated a bit of acting with a dramatic sniffle to take the sting out of her response to being childless—and to shut people up. It is amazing that she should have to go that far and that the answer to a seemingly innocent question has such implications in our society.

It cannot be said that some of the women do not feel regret at not having children, but it doesn’t last long. They do not define themselves or their life’s worth by the number of children they have or don’t have.

Nancy Van Iderstine writes about the cool treatment she used to get as a childless woman when going for her check up at the OB/GYN. She still wonders if the newfound empathy she now receives is because she has had a hysterectomy and can’t have children, rather than simply never getting around to it when she had the chance.

No Kidding exemplifies that a woman can be childless and not be lonely and bitter. The contributors to this collection are all working, professional women and often talk about taking delight at the antics of their nieces and nephews and children of their friends. Some of them have found men who appreciate and love them because not having children is not a deal breaker when it comes to love. Whether they love to babysit or prefer to keep company strictly with adults, these women are happy either way.

After reading No Kidding it is hard not to think about the reasons—and motives—some people have when it comes to having children. Who is more selfish? The woman who keeps having babies because she loves babies—never mind that they grow up and get older—or the woman who knows she doesn’t have the time or the money to have children and refuses to be a single mother?

Does the fear of not having children to care for you when you get older make you a loving parent or purely mercenary? Adult caregivers can attest to the fact that caring for an eight-pound baby who cannot wash or feed itself is much different than doing it for a full-grown adult. Is that a happy future to wish upon a child?

Although several of the contributors in No Kidding are stand-up comedians, this is a serious topic. But since all of the women are writers, No Kidding’s personal essays can be humorous (sometimes darkly so) as well as poignant.