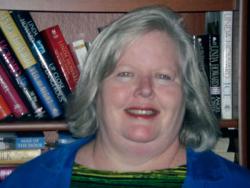 With her husband working out-of-town during the week, and two young boys at home, Lezlie Patterson picked up a romance book one day at the grocery store. She was tired of watching television, but didn’t want to devote what little time she had after the kids went to bed—and what little energy she had—to reading anything complicated or too serious.

The romance novel was a perfect escape.

Hundreds of books later, it still is.

As a feature columnist, Ms. Patterson began noticing that despite their popularity, romance novels were seldom reviewed by newspapers. She approached her editor, and sold her on the idea of reviewing romances.

Pretty soon, newspapers all over the country were regularly running her reviews.

Even after she retired from The State newspaper in Columbia, SC, the former sports writer, education reporter, and feature columnist continued to read, and review, romance books. With one son in college, and another in high school, Patterson still feels the need to escape—often.

Ms. Patterson lives on Lake Murray in Chapin, SC, with her husband and two sons.

Happy Ever After (Bride Quartet, Book 4)

“As with most of Ms. Roberts’ series, it’s visits with the characters they have come to know and love. It’s over. But at least these characters ended up happy ever after.”

“Heartwishes won’t be a Deveraux favorite, but it probably won’t be a disappointment to her fans, either.”

“As always, Ms. Garwood creates engaging characters who come alive page after page. The banter and interaction between Ellie and Max is beyond charming.

Lord Langley Is Back in Town (The Bachelor Chronicles)

“Lord Langley Is Back in Town is spun with ample intrigue, understated humor, a charismatic hero, an appealing heroine, and an utterly captivating supporting cast of friends, serva

Waking Up With the Duke (London's Greatest Lovers)

“. . . teeming with passion and steam and the love-of-a-lifetime-is-doomed tension that results in a dramatic happy ending.

Any Man of Mine (Thorndike Press Large Print Romance Series)

Once again the Chinooks are on a quest for another Stanley Cup, and one of the team’s star players is fighting his feelings for his soulmate as well as the opponents on the ice.

Amanda Quick, aka Jayne Ann Krentz, returns to Victorian England for the second book in a trilogy that begins in the contemporary book, In Too Deep.

Taken By the Prince

Christina Dodd’s newest historical, set in Victorian times, produces a hero who is a rakish, piratical prince and a heroine who is capable, unflappable, and more than able to handle such a man, whe

Eleven Scandals to Start to Win a Duke's Heart

The bad thing about reading a Nora Roberts book is the bereft feeling readers get when they finish.

Breaking the Rules: A Novel (Troubleshooters)

What I Did For a Duke: Pennyroyal Green Series

Mixing good with evil often has surprising results. Then again, sometimes the results are fairly predictable.

After more than 30 installments of this series over a span of 16 years, it’s difficult to keep coming up with superlative adjectives to describe the magnificence of this body of work by Nora Robert

When Beauty Tamed the Beast

The Scent of Jasmine

The Scent of Jasmine is a fabulous story about wonderfully created characters engaging in an intriguing adventure while discovering passion and love.

In Too Deep: Book One of the Looking Glass Trilogy (An Arcane Society Novel)

By now, Jayne Ann Krentz fans know whether they like her Arcane Society books or not.

The Lady Most Likely...

The Lady Most Likely . . . isn’t a typical anthology. While three different stories that could stand on their own comprise this book, they also blend into one tale.

Pleasures of a Notorious Gentleman

In the first book of Lorraine Heath’s latest trilogy, Stephen was portrayed as a frivolous rake who shamelessly flitted from bed to bed without conscience or indignity.

The Duke's Night of Sin

Perhaps The Duke’s Night of Sin can best be described as a naughty Cinderella story, with a couple of twists.

His Christmas Pleasure is several things: Well written, interesting, a story with strong characters who overcome obstacles to live the lives they want, together.

A Matter of Class

Mary Balogh detours a bit from her usual series writing to produce a charmingly delightful book that is a must-read on every romance connoisseur’s list.

It must be read to know why.

In Possession In Death, J.D. Robb’s segment in The Other Side anthology, Eve tells hunky husband Roarke, “I need you to give me a really open mind. I mean wide-open.”

Very little makes a J. D. Robb fan happier than the release of a new Eve and Roarke story. Indulgence In Death will make those fans downright giddy.

This is the first of Lorraine Heath’s latest series, featuring three brothers dubbed “the greatest lovers in England.” In Passions of a Wicked Earl, she certainly makes her case for Morgan

Rules of an Engagement (The Adventurers' Club)

Reading a book by Suzanne Enoch is like stepping into a time machine. She so adeptly transports readers back in time that it’s jarring to finish the book and realize it’s not the 1800s.

At times this story is more corny than funny, more sappy than cute. But overall, it’s a charming tale that forces readers to use a bit of imagination and is engaging until the end.

Sarah MacLean burst onto the romance scene with a charming book infused with humor and romance. She’s followed up that debut book with a story every bit as charming, witty, and romantic.

The good thing about anthologies is that it gives readers an opportunity for quick reads, without a lot of the flowery and extraneous prose that often bogs down other novels.

Catherine Coulter’s latest novel has almost everything an historical romance fan could want: A compelling hero and heroine, historical descriptions that make you feel like you traveled back in time

Many holiday romance novels are simply set in December. Not so with Lisa Plumley’s Holiday Affair, which is undeniably a Christmas story.