The Duke's Night of Sin 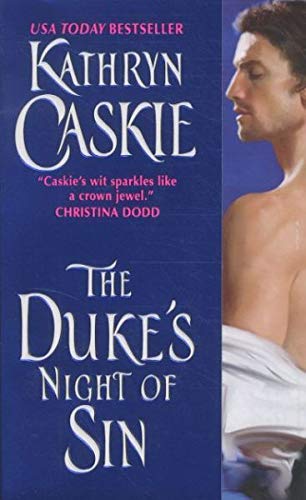 Perhaps The Duke’s Night of Sin can best be described as a naughty Cinderella story, with a couple of twists.

Mourning the anniversary of her fiance’s death, Siusan Sinclair escapes a London party for a few minutes of solitude. Duke Sebastian sneaks into the same room for an assignation with a courtesan.

The room is dark. He thinks Siusan is the courtesan. In her grief, Siusan succumbs and when it’s over, she escapes without Sebastian knowing who she is.

So the Duke looks for her.

Here’s one of the twists: he finds her, but doesn’t recognize her as the woman he’s been searching for.

Another twist: Siusan doesn’t recognize Sebastian as the man she’s been trying to hide from.

Hoping to avoid scandal and embarrassment, Siusan had fled to Bath, where she took a job as an instructor at a girls’ school. When Sebastian comes to visit his niece, he decides not to let everyone know he’s a duke.

So Siusan and Sebastian form another attachment.

This is the third in a series by Caskie, chronicling seven siblings’ tumble into love. The four brothers and three sisters were so wild growing up, they were dubbed the “Seven Deadly Sins.” In this series, they’ve all been cut off by their father, and each sibling must prove themselves to be responsible adults before they return to his favor (and get access to his money.)

The characters in this series are likeable with their independent ways and devotion to each other. Siusan has her moments—good and bad. Caskie does a good job portraying Sebastian as a man who just unexpectedly inherited a dukedom, and isn’t as confident or comfortable with the title as he should be. He shows vulnerability at times, but strong resolve at others—especially at the end, when he’s determined to make Siusan his duchess.

The story does drag at times, but manages to overcome that with its compelling characters and the intrigue of wondering what will happen when Siusan and Sebastian discover each other’s identities.

While this book is part of a series, it does stand on its own. In fact, series’ fans may be disappointed that there is so little about the couples from the previous two books.