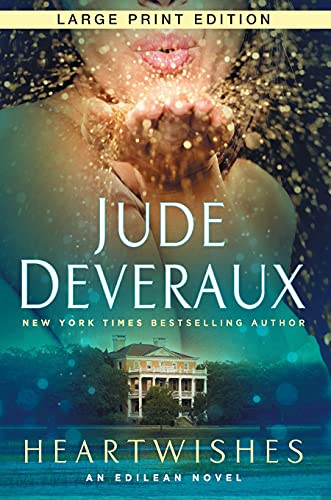 “Heartwishes won’t be a Deveraux favorite, but it probably won’t be a disappointment to her fans, either.”

Jude Deveraux can never be accused of being formulaic. Her stories are fresh and rarely clichéd.

Sometimes her unique approach scores big, creating instant beloved classics such as A Knight In Shining Armor and The Summerhouse. At other times, they end up being somewhat forgettable.

Ms. Deveraux’s latest book, Heartwishes, doesn’t earn a spot between her two classics mentioned above. It may end up in the forgettable stack, but that doesn’t mean the story won’t be appreciated and enjoyed while it is being read.

Heartwishes returns readers to Edilean, modern day. Gemma is one of three graduate students who arrive in Edilean to vie for a job sorting through historical papers obtained by one of the town’s leading matriarchs.

Colin is the oldest son of the family with the historical papers, and the small town’s sheriff. He and Gemma are immediately smitten with one another, and neither seems to mind.

The problem arises when Colin seems to be very involved with another woman. Gemma is reluctant to get involved with a man who is “taken” but her heart won’t stop pitter-patting whenever she’s around Colin.

A little communication would have helped Colin a good bit. Then again, Heartwishes would have been a very short story.

As to be expected with a book boasting Ms. Deveraux’s name, the story is well written and oozes charm. While Colin isn’t the rugged, tough-guy that describes many romance heroes, he’s a nice guy who isn’t a total idiot. He makes a bad decision that he ends up regretting, but it’s a forgivable one. He also makes a mistake that never gets fully explained, but he’s such a plain, ole nice guy that it’s hard to hold a grudge.

Gemma is a charming and fun heroine, with a personality and outlook on life guaranteed to captivate readers.

The suspense portion of the book is rather weak. Small-town robberies just aren’t that sinister, and while eventually there does end up being a real threat, it just doesn’t get the pulse racing.

Heartwishes won’t be a Deveraux favorite, but it probably won’t be a disappointment to her fans, either.