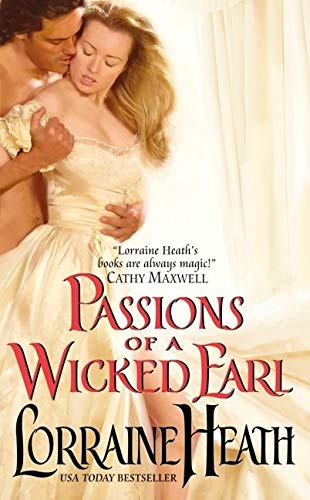 This is the first of Lorraine Heath’s latest series, featuring three brothers dubbed “the greatest lovers in England.” In Passions of a Wicked Earl, she certainly makes her case for Morgan, the Earl of Westcliffe.

Setting the story in 1853, Heath does a masterful job of introducing a cast of characters readers will adore in at least two more books. Westcliffe is the most dashing of rogues, one who exiles his young wife on their wedding night and returns to London to cull his reputation as one of London’s greatest, and most prolific, rakes.

Yet he’s not the bad guy.

Claire is a 17-year-old girl when she marries Westcliffe, the man she has been engaged to since she was born. She is terrified of Westcliffe, and frightened of being a wife. So when Westcliffe’s brother, her best friend Stephen, says he will help her delay her wedding night, she agrees to his help.

Little does she know that the plan would exile her from her husband and cause his utter scorn.

Three years later, Claire returns to London to ask her husband for a favor. Once she returns, both realize the ramifications of their actions, and as they get to know each other and see the past through each other’s eyes, they learn to forgive, forget—and love.

As you would guess, there are several steamy scenes guaranteed to make readers blush. But there is much more to this story. Heath does a great job of weaving a story of two people hurt by love, being healed by love. Keep the tissues nearby. She manages to portray Westcliffe and Claire’s faults without making them unlikable.

The tension in this story comes from wondering if Westcliffe will remain true to Claire once she’s back in his life, and whether Claire will do anything to damage the fragile trust Westcliffe has given her.

But the ending leaves no doubt that this first couple in Heath’s new trilogy have embarked on their happily-ever-after. The best part is knowing they’ll be back in the next two books. Pleasures of a Notorious Gentleman is due out in November 2010. The finale, Waking Up with a Duke, is due out in July 2011.