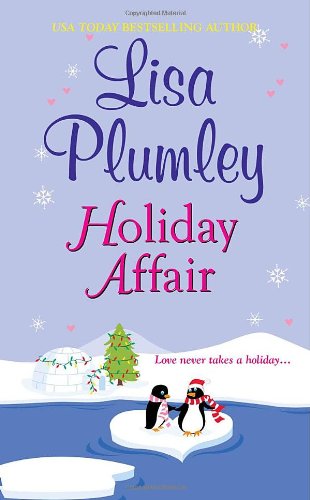 Many holiday romance novels are simply set in December. Not so with Lisa Plumley’s Holiday Affair, which is undeniably a Christmas story.

Christmas permeates this story, taking center stage while Reid and Karina try to stumble past various obstacles on their way to finding love.

Some of those obstacles are understandable. Some are downright annoying.

Hero Reid is introduced while leading a group of ill-prepared businessmen on a survivalist trip in Australia. He’s depicted as an adventurer, a world-traveler who can never settle in one place, even though he’s raising two daughters.

Heroine Karina is pretty much Reid’s opposite. The divorced homemaker and mother of three dotes on her children and is determined to give them an idyllic Christmas, despite their father’s embarrassing transformation during a midlife crisis.

The problem is Karina and her children live in sunny California.

Fate intervenes, giving Karina an opportunity to spend Christmas with her children in snowy Kismet, Michigan, at The Christmas House Inn.

Guess whose grandparents own The Christmas House?

Yes, Reid grew up in Kismet and couldn’t wait to leave for his world adventures. A call for help from his grandparents sends him and his daughters back to his small hometown for the holidays.

And he, of course, meets Karina.

The attraction is instantaneous, but both have reasons to resist. And neither resists for long.

As is the case with most of Plumley’s books, Holiday Affair has quirky characters that will make you smile and a fast-paced story that will make you hesitate to slip a bookmark between the pages. It’s funny and cute, but the romance is almost slapstick at times.

Occasionally the plot gets a bit convoluted and wacky, but the characters pull it out. Plumley has a way of capturing a reader’s interest with her wit and eccentric characters, which makes the too-silly moments bearable.

Reid is a bit complicated. He’s a good guy (he did travel halfway around the world to help his grandparents), and he’s honest with Karina. But the total transformation from an I’ll-never-settle-down-adventurer to I-want-to-stay-in-one-place-and-raise-five-kids was a bit abrupt.

Karina’s lack of confidence was a bit annoying at times, but she was nice enough.

Holiday Affair is full of Christmas atmosphere and activities, which makes it a great read during the holidays.

The ending was an acceptable happily-ever-after, although it was one of those convoluted, drawn out, too-silly moments. However, Reid’s speech to Karina made it all worthwhile.