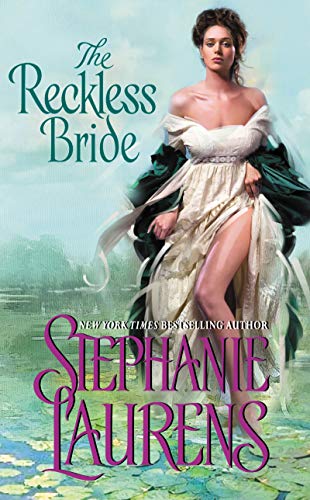 By now, readers are well versed on the utter evil and depravity of the cult whose members are chasing four brave soldiers from India to England. After four books of watching heroes dodge and fend off these nasty villains . . . well, enough is enough.

This book, like the three before it, follows the same plot: Rafe, the hero travels home to England to take evidence identifying the Black Cobra’s leader. He becomes encumbered with Loretta, who travels with him and helps him escape and fight off the evil villains.

Hero and heroine fall in love. Toward the end of the book, they are joined by Bastion Club members (heroes from Lauren’s previous series) and the Cynsters (heroes from another series). They accomplish their mission.

Rafe is the last of the soldiers to reach England, and is the one carrying the most important scroll—the one containing the original letter that will prove the identity of the Black Cobra and allow Duke Royce to convict the villain and disband the evil cult.

On his way to England, Rafe encounters Loretta and her great-aunt. Loretta is traveling with her Aunt Esme to avoid being forced into a loveless marriage by her well-meaning family. Loretta has always tried to hide her adventurous nature, and Aunt Esme is determined to change that.

Esme convinces Rafe to escort them back to England. So Loretta becomes Rafe’s partner—in more ways than one.

What makes this book a bit different is that it is the last in the series, which means all characters from each of the three previous titles converge at the end to take down the Black Cobra. The ending is a good one.

Laurens is a good writer who transports readers back in time with her historical novels. With this series, she sends fans on a journey through different countries and cultures. That may be enough to make some readers love this series. Others may think the descriptions and historical nuggets drag the story down.

Of course it’s always nice to revisit the Cynsters and Bastion Club members, and they do have prominent roles at the end of this story.

As with other Laurens’ books, the steamy scenes are frequent, detailed, and long. The hero is strong, capable and determined. The heroine is independent, loyal, and brave.

And together? They sizzle.