In Too Deep: Book One of the Looking Glass Trilogy (An Arcane Society Novel) 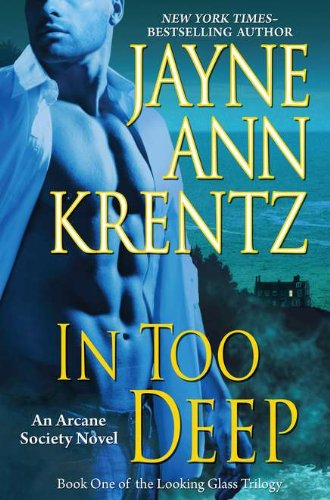 By now, Jayne Ann Krentz fans know whether they like her Arcane Society books or not. For those who haven’t read these books, it takes an open mind and an appreciation for paranormal imaginations to enjoy the story.

The stories delve into the world of psychic talents, auras, energy, etc. The heroes and heroines have some sort of psychic talent that comes in useful for hunting down and dealing with psychic bad guys.

The Jones family is the generations-old leader of the Arcane Society, the organization that chronicles and monitors people with psychic talents. Jones & Jones is an investigative agency within the Society that scrutinizes crimes by these psychics. Fallon is the head of the agency.

Fallon has been involved in several other books to date, and was portrayed as an obsessive, driven man with few social skills.

Isabella becomes his assistant, and immediately they recognize an attraction to each other—recognize it, but try to ignore it.

Krentz has managed to veer into this paranormal, psychic realm without losing the romantic bent that always has made her a romance reader favorite. Yes, there is talk about “energy that is infused with some really dark ultralight” and “seething psi” but aside from the paranormal mumbo, there is an intense relationship developing between Fallon and Isabella.

Fans of the series will enjoy watching Fallon find his mate, and like the personality transformation his relationship triggers. Fans will also enjoy the ongoing suspense portion of the book, as well as the mystery Fallon and Isabella find themselves embroiled in.

Some may find the paranormal part of the story entertaining, the idea of people having special psychic talents an interesting twist in the story. For some, this part of the story may be an annoying distraction. Regardless, Krentz produces a well-written, imaginative story with complex and intriguing characters—both good and bad. She does a good job of continuing and developing a series, while making each book stand on its own.