Taken By the Prince 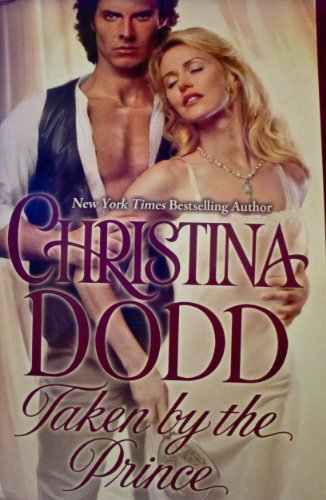 Christina Dodd’s newest historical, set in Victorian times, produces a hero who is a rakish, piratical prince and a heroine who is capable, unflappable, and more than able to handle such a man, whether he’s holding court on a throne, in a ruined hideaway or at a campsite.

Raul, or Saber, is mysteriously introduced in In Bed with the Duke, the story of how Michael and Emma adopted the persona of the “Reaper” to seek revenge against the ruler of Moricadia, who had imprisoned and tortured Michael. Prince Sandre mistreated the people in his country as well and before Michael and Emma returned to England to embark on their happily-ever-after, they had thoroughly emasculated and embarrassed the evil prince.

Raul stayed behind, and in Taken by the Prince it is confirmed that he is the rightful king of Moricadia. Taken by the Prince begins with a bit of background, explaining how Raul is sent to live with his father in England. His father isn’t a nice man, but Raul loves his half-sisters and spends 10 years learning battle strategy that will help him win back his throne.

Victoria is a friend of his sisters, and their first meeting is quite memorable. So Victoria isn’t thrilled when she sees him again three years later, when she travels to Moricadia with the family for whom she serves as a governess.

This is shortly after Prince Sandre’s embarrassment in In Bed with the Duke.

Since Raul’s identify is secret, he has to abduct Victoria. But as happens in the romance world, the captive soon becomes the captor. Raul thinks he is incapable of love, but Victoria quickly shows him otherwise.

Raul’s reluctance to admit his feelings does help set up a rather dramatic and compelling ending.

The star of the book is Victoria, whose indomitable will refuses to allow her to become a victim in any circumstance. Raul is dashing and appealing with his rakish ways, but Victoria steals the show and proves to be his perfect match.

Ms. Dodd’s latest book has all the necessary elements for making it a compelling read: Evil bad guys, a sassy and capable heroine, a powerful and handsome hero, interesting minor characters, and a passionate romance with a plot that allows good to prevail.