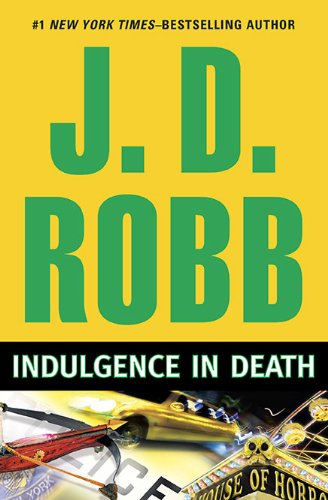 Very little makes a J. D. Robb fan happier than the release of a new Eve and Roarke story. Indulgence In Death will make those fans downright giddy.

Indulgence In Death is vintage J. D. Robb, hitting on every aspect that makes this series so popular and, well, it must be said—an indulgence for the scores of readers anxiously awaiting these new stories twice a year.

For those new to the In Death series, the stories are set in 2050s, with just enough sci-fi to make them fun. Roarke is one of the world’s richest men, incredibly handsome and totally in love with his wife, Eve. Eve is a homicide detective who loves Roarke despite his being rich. She’s much more comfortable walking through the seediest parts of New York investigating gruesome murders than attending ritzy parties and socializing with rich people.

The story begins on a romantic and fun note, with Eve and Roarke vacationing in Ireland. Eve’s unease with rural ways and Roarke’s amusement about that fact makes it a fun way to begin the book. Part of what makes these stories so engaging and addictive is the banter between Eve and Roarke—although the dialogue between Eve, Peabody, and other co-workers is often just as witty.

Eve and Roarke celebrate their two-year wedding anniversary in this story, and the romance and interaction between the two is passionate (as always) and touching. Roarke always manages to say the right thing—and does so several times in this installment. . . . Bliss!

And Eve? She continues to be independent, charmingly outraged, and perplexed at the right moments—a perfect match for Roarke and the city’s best murder cop.

The murder story in this book isn’t as complex and all pervasive as in some of the others in this series (which includes more than 30 books dating back to 1995), but is still compelling and appropriately disturbing. Eve investigates a series of random murders, each with victims who share no similarities, killed by various weapons in different locations. It reminds Eve of the game, “Clue.”

Eve and Roarke’s assortment of friends and colleagues adds spice to these stories, although they never overshadow the couple that defines wedded bliss—or at least their definition of it. It’s amazing how much humor, character, charm, and unrivaled romance Nora Roberts (who writes these stories using the pseudonym J. D. Robb) infuses into these books.