Rules of an Engagement (The Adventurers' Club) 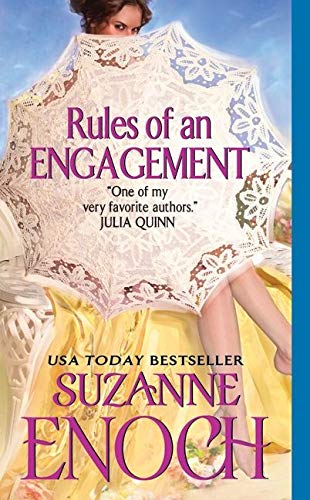 Reading a book by Suzanne Enoch is like stepping into a time machine. She so adeptly transports readers back in time that it’s jarring to finish the book and realize it’s not the 1800s.

In Rules of an Engagement Enoch takes readers out of the glitzy London ballrooms and country estates and puts them on a high seas adventure, exploring Pacific islands such as Tahiti, Tonga, and Fiji. While it’s interesting to read about Shaw and Zephyr’s adventures and encounters on those islands and while at sea, it’s more captivating to read about their adventures and encounters with each other.

Shaw has been a naval captain for many years. Most of that time, he relished the lifestyle of being on the sea, and shooting at things. He enjoyed the battles, the challenges of navigating a ship, and his love-them-and-leave-them existence.

But when he embarked on his latest mission, he was beginning to feel restless, like it was time to make a change in his life. He wasn’t certain what or how he should change, however.

Then he met Zephyr, the daughter of a famous botanist.

Shaw’s orders are to take the botanist and his assistant/daughter on a research tour of Pacific islands, many of which were known to be dangerous. Shaw quickly learns that her name isn’t the only thing different about Zephyr.

Having grown up traveling the world with her father, Zephyr never learned the proper behavior of ladies, or the way London society operated. Shaw is amazed that he finds her irritating, blunt, and honest ways intriguing and captivating.

Zephyr is just as stunned to be attracted to Shaw.

The love story between Shaw and Zephyr is lighthearted and fun. Both are likable characters: Shaw for his protectiveness, capability, command, and strength; Zephyr for her independence, assertiveness, reasonableness, and honesty. Zephyr proves she’s capable of handling anything: a commanding ship’s captain, gossiping society girls, conniving society men, cannibals, and her singly-focused and inattentive father. Shaw proves that he is capable of . . . well, anything.

Enoch spins an intriguing tale that hits on many fronts. It’s an intriguing adventure that doesn’t forget it’s a romance. The supporting characters do what they’re supposed to do, making sure the attention stays focused on Shaw and Zephyr.

The ending lingers a bit, but that’s not necessarily a bad thing. There are actually two endings—one could be considered an epilogue. Both provide satisfactory closure.