What I Did For a Duke: Pennyroyal Green Series 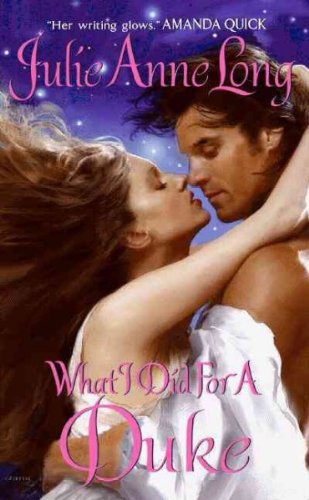 Mixing good with evil often has surprising results. Then again, sometimes the results are fairly predictable.

It goes both ways in Julie Anne Long’s latest Pennyroyal Green book, What I Did for a Duke. (A good subtitle could be And What a Duke Did for Me).

Genevieve Eversea is a good girl. With the roguish brothers she has, Genevieve isn’t totally innocent about the ways of the world, but she is innocent in the maidenly ways that count.

There is nothing innocent about Alex, a powerful duke with a wicked reputation and no conscience.

Genevieve fancies herself in love with long-time best buddy Harry. But her dreams of a happily-ever-after with the handsome young lord are dashed when he informs her he plans to propose to their mutual friend during the house party they are attending at the home of Genevieve’s parents.

Brokenhearted, Genevieve finds her day gets worse when her mother orders her to keep company with the older and much less effusive Alex, who is at the party seeking revenge against Genevieve’s brother. Alex caught Ian Eversea in bed with his now ex-fiancé. Alex’s revenge plan is to seduce Genevieve—then abandon her.

Definitely a wicked and unconscionable thing to do.

But as Alex gets to know Genevieve, he is charmed by her intellect, humor and kindness. And he becomes increasing reluctant to use her in such a way. Whether he does or doesn’t, is something to be revealed in the story.

While the plot is predictable at times, there are also a few small, pleasant surprises as well. It’s worth reading to watch Genevieve tame (somewhat) Alex, and discover he isn’t quite as wicked as many believe. Ironically, his rough edges are a large part of his appeal.

The story is well written, despite dragging just a bit at times. Just when you think it’s getting too predictable and too long, there is a small twist to keep you guessing and interested. The main characters are engaging, and the romance between Alex and Genevieve is fun to read about—especially since neither really recognizes there is a romance until the end. Alex does a good job of proving his love for Genevieve in a rather convoluted way, but don’t expect any passionate soliloquies or recitations of undying love.

This is the fifth in Ms. Long’s Pennyroyal Green series, featuring siblings from the rivaling Everseas and Redmonds. There were cameo appearances made by the two Everseas (Chase and Collin) featured in past books. While part of a series, What I Did for a Duke can also stand on its own.