Any Man of Mine (Thorndike Press Large Print Romance Series) 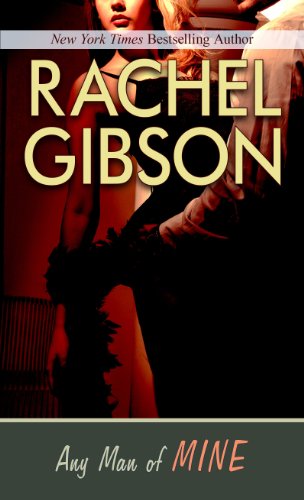 Once again the Chinooks are on a quest for another Stanley Cup, and one of the team’s star players is fighting his feelings for his soulmate as well as the opponents on the ice.

Sam has a minor role in Nothing But Trouble, the story of Mark (who is now an assistant coach) and Chelsea. Also making appearance in this book are Ty and Faith (True Love and Other Disasters). That’s part of the appeal of this story: the continuity from previous books in the series.

Rachel Gibson gives readers a story that may have an often-used plot, but she twists it around to make it her own. Autumn and Sam meet in Las Vegas and end up married by an Elvis impersonator—definitely not a first in romance land. Autumn ends up pregnant despite a marriage that didn’t last past the wedding night, raising her son as a single mom.

Again, nothing new there.

But here are a couple of the twists. The Las Vegas marriage portion of the story is over and done with when the story begins—it’s only revealed in snippet flashbacks. And Autumn never keeps her pregnancy a secret from Sam, who has infrequent visitations with his son his entire life.

But until this story begins, Autumn and Sam’s relationship is tense and antagonistic. Sam abandons Autumn the morning after their wedding, and demands a divorce through his lawyer. When she notifies his lawyer about her pregnancy, Sam demands a paternity test. As Autumn herself muses, forgiving those three strikes is pretty much impossible.

Of course, love does accomplish the impossible.

Keep the tissues handy. You may need them.