Happy Ever After (Bride Quartet, Book 4) 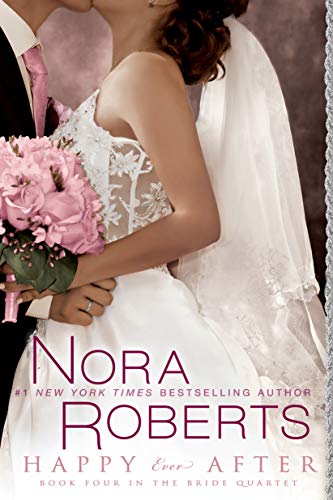 “As with most of Ms. Roberts’ series, it’s visits with the characters they have come to know and love. It’s over. But at least these characters ended up happy ever after.”

Nora Roberts struck gold again with her latest series, The Bride Quartet. Happy Ever After is the final of the four books that features lifelong friends who not only run a business together, but fall in love with their partners together.

Parker is the organizer of the four friends, the one who came up with the idea of their bridal business and donates her family estate to the cause. She’s the bluest blood of the group, the one with the family name, breeding and money.

In past books, the photographer, Mac, fell in love with Carter, a bit of an adorable geek; florist Emma hooked up with the group’s hunky friend, Jack; cake expert Laurel tumbled into it with Parker’s brother, Del; and in Happy Ever After it’s Parker’s turn to find love with bad boy Malcolm.

The group dynamic is part of what makes this book so appealing. Each story is actually about all eight characters, although Malcolm’s roll was minor until this final story.

Not only does Roberts provide romance times four, she also gives a touching portrayal of the relationship between four girls who have been best friends for most of their lives; friends who have supported each other through bad times and tragedies, and cheered during the triumphs and good times. And, of course, they help each other as they face the ups and downs of falling in love.

In the finale, readers get the bonus of seeing couples paired in the previous three books as they are planning their own weddings. And Parker’s romance with Malcolm, while it may not be the most romantic of the quartet, is fun and satisfying to read.

It was obvious the two opposites were destined for each other since they met earlier in the series. In this book, they both seem to bow to the inevitable. Their relationship unfolds in more a real, less fairy-tale type manner, but it seems to suit both of them.

Likewise, the ending isn’t as romantic as the others (especially Emma’s). But it is touching, and it does seem to suit Parker and Mal. It’s like Mal says, “So there’s no poetry and moonbeams. I’m wearing a damn suit.” Even though he needs a bit of help from Carter, he does manage to say a few more touching things as well.

The epilogue is the perfect way to end the series. Have the tissues nearby.

As with most of Ms. Roberts’ series, it’s disappointing to finish the final book because the reader knows there will be no more visits with the characters they have come to know and love. It’s over. But at least these characters ended up happy ever after.