The Lady Most Likely... 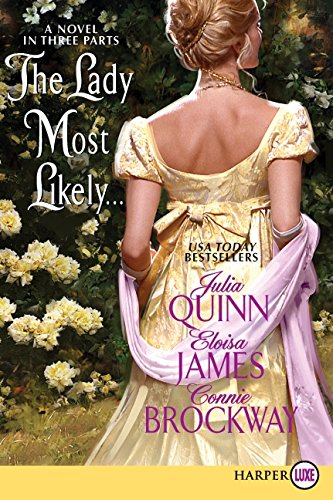 The Lady Most Likely . . . isn’t a typical anthology. While three different stories that could stand on their own comprise this book, they also blend into one tale.

The entire book takes place at a house party, held by a sister trying to snare a wife for her titled brother. A brush with death convinces Hugh, an earl, that he should get busy producing an heir. Since he refuses to leave his beloved stables long enough to engage in any sort of courtship, his sister Carolyn decides to bring a couple of ladies that she deems suitable to her brother.

Julia Quinn’s story focuses on Gwen, the undisputed beauty of the “ton” dubbed “Venus of London.” Because Hugh’s sister couldn’t invite only women, Alec (also an earl) was one of the men invited. While Carolyn is trying to pair Gwen with Hugh, Gwen’s mother is pushing her toward a Duke. Meanwhile, Alec gets to know Gwen and realizes there is more to her than her beauty. Suffice to say Hugh isn’t able to snag Gwen.

Connie Brockway’s story focuses on Kate, a charming woman believed appropriate for Hugh because of her knowledge of country life. Unfortunately for Hugh, Neill was also in attendance, and Kate had loved him most of her life. Neill had hurt Kate’s feelings when she was 16 years old, right before he left to join the cavalry. Four years later, he has returned. Suffice to say Hugh isn’t able to snare Kate.

Eloisa James is the one to finally find a match for Hugh. Of course both of the women that Carolyn picked are now blissfully engaged, and while her beloved husband suggests that Hugh is interested in Carolyn’s best friend Georgina, she shrugs it off as an improbable match. She’s wrong again. Georgina and Hugh end up being a perfect couple.

The first two stories are PG-rated (well, maybe slightly R) but James’ story definitely has a blush-inducing scene. The three authors do a masterful job of blending writing styles to make the three stories merge into one book, keeping the characters consistent throughout. It’s also interesting to read about Hugh’s perceptions as he muddles through attempting to instigate courtships with Gwen and Kate, while seamlessly falling into a loving relationship with Georgina.

Quinn, James, and Brockway tried something different with this anthology—and it worked.