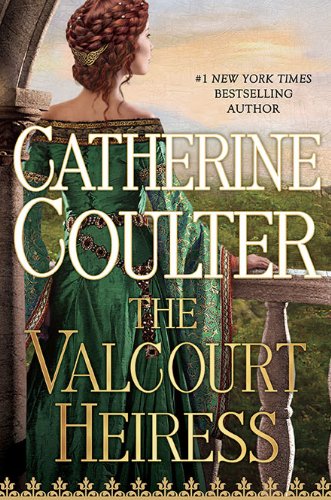 Catherine Coulter’s latest novel has almost everything an historical romance fan could want: A compelling hero and heroine, historical descriptions that make you feel like you traveled back in time to medieval England, nasty bad guys who get thwarted in the end, evil that gets defeated by good, and a romance . . . well, that would be the “almost.”

The romance between Merry and Garron is the weak link in this book. It’s not a glaring weakness, but isn’t as rife as the historical nuggets and the strife with the bad guys.

The romance between Merry, an important and well-known heiress, and Garron, a former trusted guard of the king who inherited an earldom upon the untimely death of his brother, is a bit sketchy. Both are strong characters, who are honorable, heroic, and quite likable. But their relationship seems rather superficial for most of the story.

The historical accounting will be a delight for many but cumbersome for others. Some may find the details on how to run a castle, or about the queen’s ladies-in-waiting, intriguing. Some may find themselves wanting to skip those parts to read about Merry and Garron.

Merry runs away from her home when her witchy mother sells her to an evil man. She finds refuge at Garron’s castle.

Garron’s castle suffered tragedy before Garron’s arrival, and Merry quickly endears herself to the remaining staff there as she helps them repair damages and return the castle to life.

Garron appreciates Merry’s expertise and help, but knows she’s lying about something. Even though Merry is hiding her identity, she is honest and trustworthy. Garron intuits that, but can’t let himself truly believe it.

In fact, he never really acknowledges that Merry is anything other than an obligation until she’s not there. And then, she’s not around to appreciate his great upset.

Garron is honorable, honest, loyal, and protective of Merry. Romantically, he has his moments, but they are brief and few. Garron really does nothing wrong, and in fact has one or two stellar moments. But he just never reaches the upper echelons of hunk-dom.

The steamy scenes are few and surprisingly tame.

Coulter is one of the genre’s great storytellers, and does weave an intriguing story that will quickly captivate a reader’s interest and keep it until the final page. In The Valcourt Heiress there are surprises, emotional moments, and triumphs, along with compelling protagonists is a supporting cast of engaging characters who become real as soon as they are introduced.

The mysteries that Coulter weaves through the story, as well as the relationship between Garron and Merry, will capture and keep a reader’s interest—even if that reader is not intrigued with rushes, sweet-smelling jakes, or juicy boar steaks.