Lord Langley Is Back in Town (The Bachelor Chronicles) 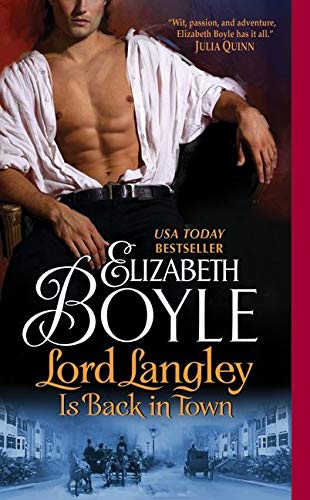 “Lord Langley Is Back in Town is spun with ample intrigue, understated humor, a charismatic hero, an appealing heroine, and an utterly captivating supporting cast of friends, servants, villains and nannies. In short, it’s totally charming.”

Lord Langley Is Back in Town is spun with ample intrigue, understated humor, a charismatic hero, an appealing heroine, and an utterly captivating supporting cast of friends, servants, villains and nannies.

This the third in a series spawned by another series. This trilogy of books is about three widowed ladies with the same title, Lady Standon; Felicity, Langley’s daughter; and the new Duchess of Hollindrake, banished all to one house where they become friends. But even if you haven’t read any of those stories, Lord Langley Is Back in Town is worth reading.

Langley returns to London in 1815 after a long absence that is a bit of a mystery to everyone—including Langley, who can’t remember much of why he was imprisoned and accused of treason. He returns to England intent on clearing his name, and discovering what happened.

Langley also has a reputation for being quite the rake, and for his various mistresses (including a couple of princesses and a duchessa) living with him and his daughters as “nannies.” They descend on London upon hearing of Langley’s return, and become houseguests of Minerva, his intended, against her insistent protests.

To fend them off, Langley stages a faux engagement to Minerva, who eventually has her own reasons for agreeing to the fake betrothal.

As he continues with his investigation to discover who wanted him dead, and accused as a traitor—and why—his “engagement” to Minerva forces him to spend more time with her. And the infamous rogue is shocked to realize that he really enjoys that.

While the identity of the bad guys is never in doubt, the intrigue is still compelling enough to captivate a reader’s interest.

It is often difficult to remember that Langley is the father of two grown, married daughters. Granted, he did have the twins at a young age, but he’s still 42 in this book—and acts a least a decade younger. And if the model on the cover is 42 years old, well, then 42 is the new 20.

While Lord Langley Is Back in Town can be enjoyed as a standalone story, chances are once you’re introduced to the heroines from the other books—Elinor, Lucy, and even Felicity—you’ll be curious enough to go back and find those books (Mad About the Duke, How I Met My Countess, and Love Letters from a Duke).

Overall, it’s a good read—not necessarily a nail bitter, but one that will keep a reader’s interest. The evolving relationship between Minerva and Langley is fun to watch unfold, as is the way their personalities complement each other.