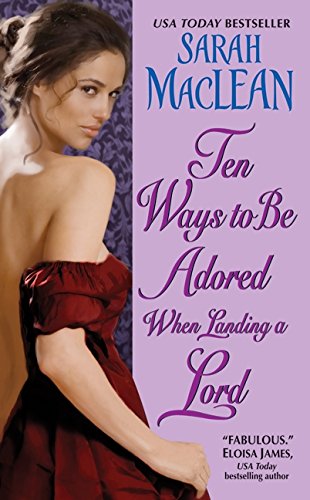 Sarah MacLean burst onto the romance scene with a charming book infused with humor and romance. She’s followed up that debut book with a story every bit as charming, witty, and romantic.

MacLean’s stories read with an ease and pure pleasure that usually befit the genre’s veteran divas. It’s exciting to imagine the stories that are yet to come from this new, very talented writer.

Lord Nicholas is the younger twin brother of Gabriel, the charming rake snared by Callie in MacLean’s debut, Nine Rules to Break When Romancing a Rake. In that book, Nick came across as the less rakish of the two.

In Ten Ways to Be Adored When Landing a Lord, Nick’s adventurous past is revealed. And when a magazine dubs him a most eligible bachelor, he reluctantly agrees to resurrect his “hunting skills” to find a friend’s runaway sister.

Who he finds is Isabel, who runs a secret home for women who need refuge and help.

Isabel was betrayed by her father, and finds it difficult to trust any man. But when she meets Nick, she wants to trust him—and she wants him to help her shoulder her many responsibilities and burdens. But years of distrust are hard to overcome, and her doubts threaten to ruin the best thing that has ever happened to her—a relationship with Nick.

As in MacLean’s first book, this story has engaging characters, from the hero and heroine, to the support cast. It’s also a treat to see Gabriel and Callie in wedded bliss, and to see Gabriel remind Nick of the advice he gave when Gabriel was on the verge of losing Callie: “. . . I would do whatever it takes to convince her that she should take a chance on me despite my being a royal….”

There is passion, romance, emotion, and charm. The ending is quite enchanting, making the reader sorry to say goodbye to the characters, past and present.