Eleven Scandals to Start to Win a Duke's Heart 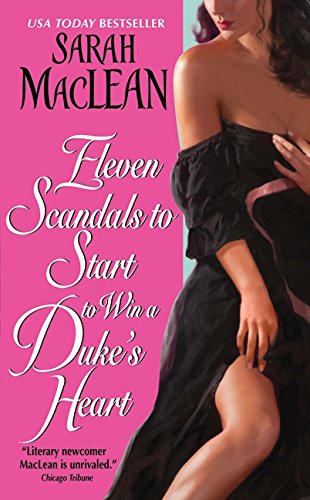 Eleven Scandals to Start to Win a Duke’s Heart is the third in a series about the St. John siblings. The eldest brother, Gabriel, aka the Marquess of Ralston, is the “rake” in Nine Rules. Nick, Gabriel’s younger twin brother, is the “lord” in Ten Ways to Be Adored When Landing a Lord. And now, it’s sister Juliana’s turn in Eleven Scandals.

The Duke of Leighton is introduced in previous books as a snob who disdains any sort of scandal, or those who attach themselves to such behavior. In Ten Ways his sister is pregnant and is granted refuge with Isabel and Nick in the country. Simon, the Duke of Leighton, leaves her there and returns to London with thoughts of containing the scandal his sister’s pregnancy will descend upon his family’s unblemished reputation.

In Eleven Scandals, he decides to engage in a loveless marriage with Lady Penelope, whose pure reputation and ladylike upbringing is undeniable and rivals his own impeccable ways.

But he keeps encountering Juliana.

Juliana is an unknown half sister to Gabriel and Nick, and comes to live with them in Nine Rules. It doesn’t take long for the siblings to bond, and the brothers appreciate their sister’s fiery, Italian-bred independence and understand her struggle to conform to England’s more rigid ways.

Juliana doesn’t try to behave scandalously, but such mishaps do seem to befall upon her. And Simon seems to always be a witness when they do.

Simon doesn’t want to be attracted to Juliana. She’s everything he doesn’t want: independent, impetuous—and she definitely doesn’t share his insistence that scandals should be avoided at all costs, that societal rules must be obeyed. She’s the younger sister of a scandal-ridden family, the daughter of a woman involved in one of England’s biggest scandals in recent years.

But he thinks she is beautiful. And he is attracted, no matter how much he doesn’t want to be. Juliana tempts him to shed his decorous behavior and while he scorns her for that, it also arouses a passion that he can’t ignore. He calls her his “Siren” and eventually quits trying to ignore her pull.

Juliana has been attracted to Simon since she first met him, despite his stodgy ways. But she knows her reputation is blemished, and that will not do for Simon. Still, she can’t ignore her feelings for Simon any more than he can for her.

Ms. MacLean gives readers another well-written, fast-paced, splendidly entertaining story about two people bound by love. She creates passionate characters, artfully weaving in cast members from her previous books to add colorful interest. Her creativity pulls a reader into Regency England by making the families, and the situations she creates, compellingly interesting.