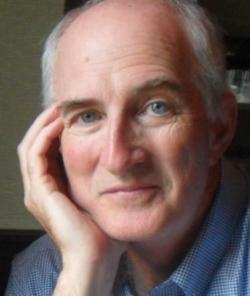 Gregory Wilkin graduated from Yale and earned a Ph.D. from the University of Toronto with a dissertation on the Templars and the Grail. Some of that research has appeared in English Studies, Spenser Studies, and a Liverpool festschrift called Court and Poet.

Currently he teaches in the English department at Phillips Academy, Andover, having taught at Dulwich College, London, England, School Year Abroad in Rennes, France and Physics-Mathematics School 165 in Akademgorodok, Siberia.

A PTR-certified tennis professional, he has just completed a screenplay based on his novel The Rabbit’s Suffering Changes: Based on the True Story of Bunny Austin, the Last British Man—Until Murray—to Play in the Finals of Wimbledon. He sees Jude Law as Bunny Austin, Naomi Watts as his actress wife Phyll Konstam, Daniel Day Lewis as Fred Perry, and Meryl Streep as a woman known to the Austins as Fat Nanny. “Seriously,” he says. “I think she’d like the role.”

The Rabbit's Suffering Changes: Based on the True Story of Bunny Austin, the Last British Man-Until Murray-to Play in the Finals of Wimbledon

This novel tells the story of an unsung heroine of the American century, Katharine Wright, sister of Orville and Wilbur. It is at once heartwarming and heartbreaking.

The Noise of Time: A novel

In his deft, swift but deeply thoughtful short novel The Noise of Time, Julian Barnes has turned to one of the most poignant, painful encounters between artist and unbridled governmental c

Something would have to be pretty important to draw Emily Dickinson out of her domestic seclusion, compelling her to brave the busy streets of Amherst.

The Givenness of Things: Essays

In the second and final installment of a recent extended back-and-forth (shouldn't it be "forth and back"?) between President Obama and Marilynne Robinson in The New York Review of Books,

John Irving, now in his early seventies, has been encouraging readers to think of him as the contemporary Dickens for more than four decades.

The Prank: The Best of Young Chekhov

Somewhat unnoticed in the cloud of dust this summer about Harper Lee’s long-delayed Go Set a Watchman, Maria Bloshteyn’s brilliant translations of the earliest Chekhov stories, some of the

There’s a Terrance Hayes line that goes “A bandanna is a useful handkerchief, but a handkerchief is a useless-ass bandanna.” A golfer or three-point-shooter might say “Never over, never in.” An unc

But for a few years in the early nineties, when a combination of big new rackets, big new servers, dogmatic coaching, and fast courts made it all rather boring (for spectators and, quite possibly,

Chaucer's Tale: 1386 and the Road to Canterbury

“Bravo! May there be more of this kind of book!”

Nicola Griffith is a spunky and fascinating personage, not at all loath to put herself out there: blogs, interviews, appearances, a multimedia memoir you can order that comes in a box with some of

“To this latest book (a collection of good-sized pieces for The New York Review of Books and quite a few, well, bad-sized ones, little nuggets he wrote as speeches or trib

Preparation for the Next Life

“Not since Charles Frazier’s Cold Mountain have such arduously yearning treks been made through maddening, heartbreaking obstructions in the name of love.”

One test of the uniform quality of the work in Best Essays collections like this one is whether or not a writer who almost made the cut, listed in the back as “Notable,” would be likely to read wha

Some Luck: A Novel

“Yes, Some Luck may read like the slow drip of a farmhouse faucet. Yup. Let’s say you say that. Just get a bucket under it, and let it accumulate.

One might think an Aussie tennis player who would call himself a game changer in the title of his autobiography might be a "dinkum figjam," a self-consciously "tall poppy,” and "not much chop" as a

“Characters like these, and scenes from the siege of New York, as well as the flirtation between Elizabeth and the handsome Antonio Filicchi, along with a very good death . . .

“That ability to deal with it—a staple in stories of charming North American nebbishes like Herbie Bookbinder, Augie March, and Duddy Kravitz—may be what endears us most to the perennially

Dancing Fish and Ammonites: A Memoir

Careless People: Murder, Mayhem, and the Invention of The Great Gatsby

“Taking care with these often careless writings is what this book best delivers.”

Imagine: Although your normal workday is perfectly honorable and suited to your talents, you must take advice from exploitative mentors and allow yourself to be confined in an unnatural enclosure.

My brother seven hours late flying into the most dangerous American airport, I sat on the floor against the wall in a waiting area with a blithe look on my face, scarcely bothering to eat or drink: