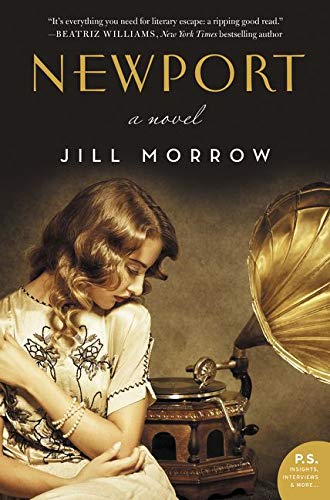 A rich jazz-age family convenes at a Newport summer palace where an old widower intends to have a séance and get the approval of his dead wife for a new marriage only to learn that his handsome lawyer has a good deal of history with his intended.

It doesn’t get any better than this!

That wasn’t meant as a puff. Overhearing the elevator ride with the prospective publisher is probably hearing this story in its best form. For despite its artfully fast chapter rhythm, its ne plus ultra glam setting, its Wharton/James hair-trigger etiquette violations, and its Galsworthyworthy cast of verbal dagger-wielders, you’ll likely be taking the brougham or whateverthehell to Providence at the earliest chance to get away.

Historical fiction? If you’re looking for another James Clavell, Edward Rutherford, Philippa Gregory, or Colm Toibin, you won’t find that in Newport author Jill Morrow, at least not this time around.

A gold-plated potboiler set in the twenties with frequent teasing flashbacks to a halcyon 1898, her new novel could be set almost anywhere rich people have hidden out. Aside from a few easily Googleable street names, it gives you almost nothing about Newport, reading like a screenplay retooled, 90 percent dialogue and parentheticals, the rest rather perfunctory notations largely concerned with the placement of hands, the openness of eyelids/lashes, the height of eyebrows, and the color or temperature of cheeks.

The jeune premiere, Cassie, is an accomplished grifter and is respectably self-directed. Her high-water mark, and it gives us a hint about the genre, comes after almost 300 pages and is, by then, no surprise. “She’d fallen willingly into bed with Adrian Delano. Even now, it was she who guided his hand to her breast as the room became nothing more than a rustle of soft sheets and quilts. Adrian’s lips traveled down her neck as her nipple grew hard beneath his fingers.”

Morrow wastes no time establishing some of the essentials about her two good-looking lawyer guys, Adrian De la Noye and his sidekick Jim Reid.  “The smell of phosphorus hung in the air as a match arced through the darkness toward the cigarette in Adrian’s mouth. Illuminated briefly by the flame, his chiseled features appeared almost otherworldly, his dark hair and eyes conjuring images more akin to pirates and gypsies than to prosperous middle age. Jim would have traded even his fresh new Harvard Law School sheepskin for some of that smooth coolness.”

You have to admire the dispatch with which she dispatches exposition, and it’s good to know right off the bat which of the two is the inevitably chiseled, dark-eyed, cool dreamboat. Before another page goes by we get a reminder on these essential points:  “. . . the man had never seemed ruffled or out of place. Such ease was to be expected in the sanctified halls of Andover and Harvard, which Jim had attended on Adrian’s dime. Adrian had been born to fit into places like that, and he called both institutions alma mater.”

“Sanctified halls” doesn’t pay off as facetiousness, and so it surely isn’t meant to, but it’s even worse when taken straight: credulous, strangely formulaic, unremunerative of attention. For that matter, pirates never prospered and never reached middle age? And what’s he doing arcing his match toward his cigarette? There are other non sequiturs about these guys. “With his long limbs and open, Irish face, he was as unthreatening as a puppy.” Long limbs are unthreatening? Irish faces are open?

There’s occasional excess motion in the prose, the stylistic equivalent of arcing a match to a cigarette. “. . . like a street waif with no place to call home.” “Catherine nodded her acquiescence, color high.”

There are some inexplicable quirks of diction. In fact, author Morrow makes her people “quirk an eyebrow” a number of times. And she has recurrent trouble maneuvering the word “maneuver:“ “This time she didn’t wait for him to maneuver the stairs.” If he’s maneuvering the stairs, even if he is all chiseled and everything, she’ll actually need to wait. “Undeterred, he led her toward the house, maneuvering the path as if it were the rolling deck of a ship.”

“A snicker worked its way through Jim’s nose.”

“Jim’s face burned with the flood of a hot red flush. Words bubbled to his lips. Adrian intercepted them with the graceful stealth of a panther.”

“He could read her heart as if there were words etched upon it . . .”

“He kissed her, briefly silencing the words that bubbled to her lips.”

After someone says something obvious, an interlocutor says, “No joke, Sherlock.” No reader buy-in, either: We are to believe the character edited the vulgarity out of the remark? (Well, maybe so. Maybe it’s a rich-person thing. I remember one of the rich kids in Metropolitan saying “He can just . . . go to heck.”)

“. . . The voracious expression he sported had probably become so habitual that he had no idea it was even there.” Sport as a verb is inexcusable, in any context, even with reference to clothes (it’s my moist). But here, if he isn’t aware of the expression, how can he be sporting it?

This next is a matter of taste, a matter of how comfortable you are reading something like script shorthand, but descriptors often get attached like cursory emojis.

“Oh!” she cried, hands flying to cover her mouth.

“Oh, all right,” she whispered, peeved.

1) Morrow is an accomplished absolutist, by which I mean she uses the absolute construction to fine effect, and often. We’ve already seen the lovely “color high” at the end of one sentence, and “mouth curled in disgust” just now. Earlier: “his dark hair and eyes conjuring images . . .” Isn’t it true that there’s no syntactical feature considered more writerly right now than the absolute construction?

2) With the plot involving séances, Morrow stays adroitly noncommittal about whether spiritualism is to be trusted, even in a short essay at the end, “The Lure of the Séance.” If there is some kind of doctrinal office for the spiritualist church in Lilydale, NY (the Vatican City of spiritualism, I was told in my youth, passing through on monthly trips to the orthodontist), this book will not be indexed.

3) The principle villain is a rich-guy rapist. Any book that hunts that beast gets my support.