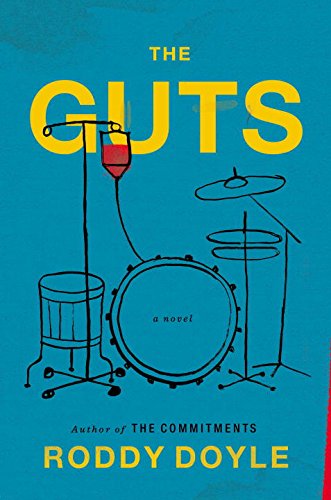 My brother seven hours late flying into the most dangerous American airport, I sat on the floor against the wall in a waiting area with a blithe look on my face, scarcely bothering to eat or drink: I had Roddy Doyle’s first Barrytown novel, The Commitments, in my hands, and I was taking my time, occasionally breaking into heedless avalanches of laughter. He was all apologetic when he finally got there, but I looked up and allegedly said something like “You’re grand.” So someone like me turns the first pages of The Guts, the fourth Barrytowner, expecting it to be a lot of fun.

​In these books, Doyle follows the ups, downs and all-arounds, most centrally, of the Rabitte family, a spunkily resilient, ingratiatingly forthright collection of music-loving soccer-fans, who give as good as they get, even when their getting isn’t all that good.  The mixed fortunes of Ireland during the decades the series covers are neatly exemplified by the busted booming of Jimmy and Veronica and their amiable and enterprising clan.  Just as their original band founders just before their big moment and the Rabitte patriarch’s sweat-equity fish-and-chipping venture is literally scuttled in order to save a friendship (The Van), Jimmy blows the whistle on himself at the end of The Guts.

It is the close attention Jimmy and his family and friends pay to each other, now heightened by their use of mobile phones and social media aps, that not only makes us appreciate their quick wit but subtly adds drama in this latest installment, especially when Jimmy Jr. has something to hide, whether it’s his bowel cancer and his treatment results, his dalliance with an old flame from the Commitments’ days, or the fact that the fabulously successful band he claims to have discovered isn’t really from Bulgaria and the vintage song they sing isn’t really from 1932 but was spawned by a committee of fecund Rabittes (don’t do this in dialect).

The way they finish each others’ sentence-fragments has great charm, but also a good deal of edge, of danger: how precious each of these relationships is and how easily it could be blown sky high by a misplaced syllable or keystroke.

​Doyle is a deeply courteous writer (which isn’t to say courtly:  fuckin’ and fuck-off! and cunt! all over the place): he leaves it to his readers to make the calls.  Typically, when somebody asks Jimmy or Outspan (a dying band member) or Jimmy’s da their opinion of a band or singer, the verdict will be either “grand” or “shite,” immediately followed by a reconsidered correction, the opposite of the original choice, as if the speaker has run a BS test and wishes to enter the results.

​Even so, he holds the meter up to himself, too.  When things are coming to a head, Doyle has Jimmy think to himself “The next four hours [will] be mad.  All [my] acts—[my] job, [my] fuckin’ career—[are] compressed into the afternoon” and then “That[‘s]shite, too dramatic, but it [is] still going to be mad.”

​As the book draws to an end, with a fine, fun evocation of an Irish music festival, there IS more than a bit of madness. Des, the one member of the hard-working, celebratory foursome not pegged as a cancer warrior, has a shroom reaction the first night of the festival and the guys hear him make an odd remark: "How huge the grass I'm in is."  They find him with a new woman in the morning.

​“Jimmy hoped Des would bring the woman over with him so he could get a good ​look at her. But he didn’t. He kissed her on the mouth—fair enough—and they ​swapped phone numbers. They looked like they both needed help; she was in ​huge grass of her own.”

True enough and good on ya for noticing: for all that there is so much cancer about and prominent characters are counting the days, most of the women are still mostly there to be looked at, credited in most cases, age be damned, with being potential rides. Caveat emptrix.

But there are rides and there are rides. The dying Outspan, who has been the hardest Commitment to please all the way through the tetralogy, is borne wildly along the top of the crowd at one very late point, sitting precariously in an inflated chair, gripping his oxygen canister: He’s found by his mates shortly after, having been cavalierly dumped onto the grass, which for him isn’t that huge. Ouch.

​The poor cunt was close to weightless. The cylinder was nearly as heavy as him.  ​They carried him over towards an empty patch of the field. They lowered the ​chair to the grass.

That’s not exactly how The Guts and the tetralogy end, but I’ll let it ride, because I think Outspan was righ’.