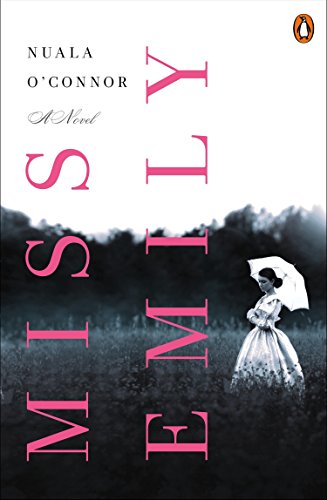 Something would have to be pretty important to draw Emily Dickinson out of her domestic seclusion, compelling her to brave the busy streets of Amherst. That's the inner wheel of Nuala O'Connor's recent short novel Miss Emily.

In pithy alternating chapters, O'Connor lets two young women tell the story: Emily and her new Irish maid, Ada Concannon, who has arrived from Tigoora in County Dublin with an impressive array of cooking skills, a soaring, unassailable naivete, and a sturdy, resilient constitution. Her good looks prompt attention, both appropriate and inappropriate, promising and threatening, from two at least literarily likely lugs who work around the Dickinsons’ property, devoted good lad Daniel Byrne and leering lothario Patrick Crohan.

Dreadful things happen, and then good things, with our Emily coming through in a big way. By then, O’Connor’s skillful rendering of character will have made most readers care a good deal about Ada. No guarantee on that score when it comes to the young poet-recluse, however. In most scenes she arrives unwelcome and leaves more so, a blend of Anne Shirley and Carly Fiorina, with all the practical sense of the former and all the charm and relevance of the latter.

"You say the queerest things, miss."

"I lock my door with its imaginary key to release my freedom, for if the outside cannot be let in, I can still try to unleash my own insides."

O’Connor has a touch of the poet, Lord be praised, for the work she has about her to do. It’s a fairly glorious thing when Ada comes into her room the first time after a definitive encounter with her proper lover and Emily notes “the pluck and poise of love” about her. Other exertions of diction may prove less successful. With her new maid coming, Emily says that her own “shriven hands will look robust once more,” as if that word has something to do with “shrivel.”

“Yes, I write for myself, and if the thing I write ends up shambolic or spasmodic, then what of it?” (Isn’t that first adjective a much more recent facetiousness based on “a shambles”?)

“We drink our tea and listen to the clock tick and Baby Martha’s fossicking noises from her bassinet.” Fossicking, really? Maybe so. Sounds like a sickly suckling sucking . . . and it lets us picture Baby Martha with a nice little miner’s helmet, testing and throwing away pieces of quartz, ammonites.

“The ticking sounds sluggish to my ears; it goes slow, slow, slow, then halt.” Really? “Halt” as an adjective? So the ticking began to get irregular? That usage could strike one as a flaw, but with some fossicking around among Dickinson’s works, one will surely find such curiosities, adjectives where adverbs naturally go.

Preferable to Emily’s poetasterly natterings might be Ada’s own occasional forays into a higher style. "Dublin is washed with showers, not made clean by them but made gray and grayer. The city smells of itself: a hoppy, thick, smoky smell that I find pleasant and restorative. Gulls as big as dogs careen above the harbor, letting out eager cries. We stand on Queen's Road looking back at the boat, trying to adjust ourselves to the feel of solid ground under our feet and the familiar, easy air of home." There we go.  Give me that familiar, easy air any day.

Also familiar, sadly, is what dark visitations bedevil our women here, with rape, social branding, sexually transmitted infection—a whole range of 19th-century injustice that lives on to these days. Good on O’Connor for making her readers face it and for having the plucky, poised Emily face it down.