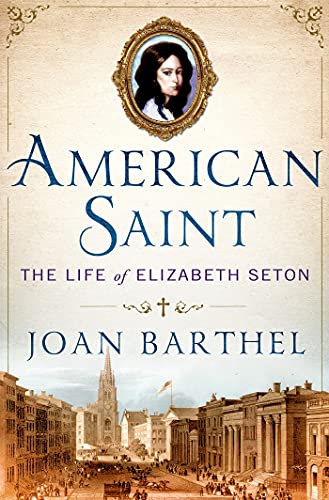 “Characters like these, and scenes from the siege of New York, as well as the flirtation between Elizabeth and the handsome Antonio Filicchi, along with a very good death . . . all make this perfect fodder for a movie. It’s also perfectly suited to a book.”

Joan Barthel, whose earlier work dealt with murder cases in Connecticut and California that only an act of God could keep from turning into movies, seems to have a winner here with her timely and largely adulatory biography of Mother Elizabeth Seton.

After watching Meryl Streep’s despairing turn as Sister Aloysius in John Patrick Shanley’s Doubt and Barbara Jefford’s as the enragingly venomous mother superior in Judy Dench’s Philomena (as I’m confident He did, on a very big screen), Our Lord may want to get this book made into a movie Himself.

Publicity for the book emphasizes Seton’s wealthy upbringing, her political connections in the young republic, the sad tale of her husband’s early death in Italy, and the way she “resisted male clerical control of her religious order, as nuns are doing today.”

The life Barthels recounts counts in different ways for different folks: Maya Angelou in her foreword to the volume says “Seton’s life and achievements are proof that courage is the most important of all the virtues.”

True enough, Seton had to fight off the harshly overbearing Father Superior, John David, but in doing so, she worked closely with two other French priests and Bishop John Carroll. Courage it took, but to bill her as an early Catholic flouter-of-male-privilege is certainly to engage in a rather crass kind of book mongering.

In her introduction, Barthels situates her biography in the fraught context of the current administrative dispute about American nuns. The Vatican “doctrinal assessment,” which Sister Maureen Fiedler called on NPR “a hostile takeover,” will take five years to be prepared “and no one knows,” Barthels writes, “what will happen in the end.” In one of the least successful segues she pauses, indents, and gives us: “But Elizabeth Seton was there at the beginning.”

These beginnings bring out the best in our author: the early days in the Bayley family in New York are vivid and convincing, full of period detail and useful cultural background. As the young widow and mother takes her charges to Emmitsburg, the narration begins to rely on her letters, at one point quite a few of them rather wearily strung together. But some of this was heroic, loving effort by Seton herself, carried on despite fevers and worsening tuberculosis.

This is a lady who went through a lot.  The accounts of the death of her daughters show her face to face with doubt:

“‘Eternity’ had long been her beloved word, her hope and belief.  Now she was “uncertain of reunion.” She was kneeling at Anna’s grave when she saw a large, ugly snake stretching itself on the dried grass. Elizabeth was desolate, seeing Anna as ‘the companion of worms and reptiles! And the beautiful soul, where?’”

The takeaway here: doubt for the faithful, even for the saints, is one’s daily bread. Despite it all, Elizabeth Seton keeps her wits and her charm.

Listen to the warmth of her welcome, and the gentle self-mockery of her own neediness having heard that a long-lost friend might visit them in Emmitsburg: “Tell her the front door, the back, the side door . . . and all the windows up and down will open at her approach.”

She created a sisterhood to which the women made their vows each year, committing themselves again and again to a service to the sick, the poor and the illiterate, for no charge. And she kept a better and better eye on her own children, among them a hilariously self-exculpating wastrel son, Richard.

Characters like these, and scenes from the siege of New York, as well as the flirtation between Elizabeth and the handsome Antonio Filicchi, along with a very good death (among her last words, pointedly referring to the worst of the patriarchal priests as “Mr. David,” begging nonetheless “pardon for all the pain [she] gave him”)—all make this perfect fodder for a movie. It’s also perfectly suited to a book.