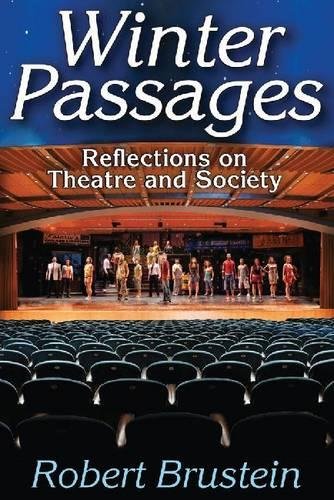 “To this latest book (a collection of good-sized pieces for The New York Review of Books and quite a few, well, bad-sized ones, little nuggets he wrote as speeches or tributes or five-minute intros) attention will likewise be expected, but the question remains a good one: by whom?”

Writing in Winter Passages about Arthur Miller (surely not for the first time in his long career and probably not the last), legendary theatrical jack-of-all-trades Robert Brustein notices that the famous Linda Loman line “Attention must be paid” neglects to say by whom.

To this latest book (a collection of good-sized pieces for The New York Review of Books and quite a few, well, bad-sized ones, little nuggets he wrote as speeches or tributes or five-minute intros) attention will likewise be expected, but the question remains a good one: by whom?

For those of us who spent any time in New Haven or Cambridge during his long tenures there, this little book will be pretty irresistible: time and again names from the great repertory renaissance he engineered in those cities come up, names like Christopher Lloyd, Meryl Streep, Mark Linn-Baker, Jeremy Geidt, Karen MacDonald, Cherry Jones, and the great directors and impressarios he cultivated and protected, and it is these names and their stories that are interesting to the likes of us, no less than to historians of the theatre.   Otherwise, who’s his audience?

Among the longer pieces, in fact the essay he leads with, is something he delivered to a convention of businesspeople, and there he is at pains, sometimes rather painful ones, to demonstrate that running something like the Yale Rep is like running a good business. There mustn’t have been much on the docket that night, for Professor Brustein certainly didn’t rush himself.  All the same, who among us would not have stood to applaud his final words? “The theatre is the only activity I know that calls its product both a work and a play. It is a profession both mischievous and serious, relaxed and intense, lunatic and exalted, individual and communal. These are qualities that all of us were born with and all of us would like to practice into old age. They coalesce in artists and artistic organizations. There is no reason they cannot coalesce in every human institution.”

The more constrained bits, like his “five-minute intros” on playwrights (a various crowd, e.g. Sarah Ruhl, Alan Ayckburn, Lorraine Hansberry, Aristophanes, Tony Kushner, Aeschylus, O’Neill . . .) are generally less successful, hastily capping things with often undercooked summary judgments. “The century that followed [Ibsen’s] death was shaped by his spirit, his courage, and his fiery vision.” “Kushner dramatizes the spiritual instability of second-millenium America, creeping like a rotting vine though all our institutions, through all our waking lives and dreams.” “[Sarah Ruhl] is a playwright to be watched—bold, fearless, and intrepid.” (By the way, who was the editor who allowed him to end the essay with Three Synonyms Masquerading as Three Ideas?)

Brustein was for two years a fellow at the University of Nottingham, and he can be caught playing that bit; listen to him using one of the signature moves of the Charming Know-It-All Senior College Don: “Aristophanes, who wrote his plays between the last half of the fourth century BC and the first part of the third, is the oldest comic dramatist known to history. He is also one of the very best.”

His use of the witty coinage “futilitarian” shows there are limits to his patience with rebellion and dark, dismal approaches: he calls Samuel Beckett the “quintessential playwright of existential rebellion, that futilitarian protest against a godforsaken naturalist universe. . . .”

There aren’t too many such blind spots, but blind spots there are, among them failing to see a distinction between sex and gender (he makes a horrendous joke that I refuse to share), keeping alive a zomboid opposition to political correctness, and persistently attributing bigotry and bias to Shakespeare. (Did Brustein never see the Streep-Julia version of The Taming of the Shrew, the version wherein Kate tames Petruchio? He seems to have seen everything else she has ever done. In fact, of all the tribute speeches in this collection, that’s the one we’d all wish for.)

Some of his best shtick turns out to be about shtick: his insightful account of Jewish comedy makes a ton of sense and shows a sensibility accurately tuned to the boisterously astringent sentimentalities of klezmer and all things thereto appertaining.

Maybe the best is what he saves for last, a beautifully heartfelt trip down the long memory lane of Jeremy Geidt’s brilliant career. Geidt’s was a huge talent, a tremendously loyal and indefatigable member of Brustein’s troupe and an enduringly influential teacher. Brustein’s generous words at that memorial do honor to both him and his subject. They’re certainly more worth the remembering than his much less generous and much less interesting words bemoaning teenagers’ overuse of “like” or Bart Giamatti’s withdrawal of support for the Yale Repertory Theatre.

To give him a bit of his admitted due, we must acknowledge that convincing the YRT troupers to come to Harvard was a bold, signal, and impressive move of a magnitude we’re unlikely to see again. Picture Auerbach convincing Russell, Cousy, and Heinsohn to play for the Knicks, or Belichick selling Brady, Gisele, and Wilfork on moving to Shea.