The Prank: The Best of Young Chekhov 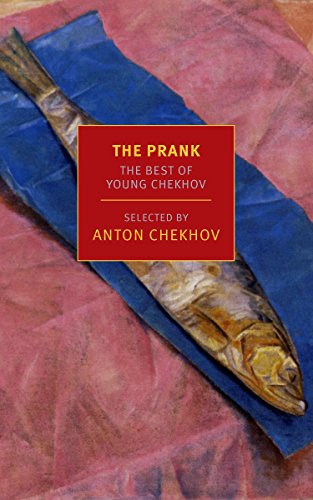 Somewhat unnoticed in the cloud of dust this summer about Harper Lee’s long-delayed Go Set a Watchman, Maria Bloshteyn’s brilliant translations of the earliest Chekhov stories, some of them never seen in English, have been published by New York Review Books under the whimsical title The Prank, whimsical principally because no story therein has that title. The book might as well be called Go Steal a Watchfob. (The punchline of one—yes, Chekhov purists, I must warn you, some have punchlines—is the surprise purloining of a suitcase on a train . . .)

Chekhov was writing under various names in those days and despite the one he chose for this collection, Antosha Chekhonte, he had nothing particular to be ashamed about. If you can handle the patronizing sexism that agonizingly accumulates in his famous later work “The Darling” (where Olenka Semyonova takes up each of her three husbands’ professional fixations, and finally her young son’s schoolyard ones, with a gallingly servile haste), you’ll be able to stomach the slow-wittedness of the women in “Artists’ Wives,” “Chase Two Rabbits, Catch None,” and “Before the Wedding.” Most of the stories are quite brief, more like what you’d see from Chris Buckley or Steve Martin in The New Yorker’s “Shouts and Murmurs” than from someone like Tessa Hadley or Andre Dubus in a featured story.

These are far closer to gags than to what we expect in short stories now, and a few are infected with the self-congratulatory sheen of spoof-writing, where the complexion of a writing style is swollen, fascinatingly garish and heightened, like otherwise healthy skin with poison ivy. Whatever traits Chekhonte is noticing in Verne, Zola and Hugo and their reportedly mediocre Russian translators, we’ll most of us just have to take Bloshteyn at her word that the joke is beautifully on them and not on us.

Fun might dutifully be had snooping around for signs of the later master’s style and thought patterns, where description has become calm and unhurried, like the movements of a confident family doctor, one who trusts the available diagnostic tools.  At this early point in his career, though, the best we will see is a story like “St. Peter’s Day,” which plays like a fable remade (he played the same game in “Chase Two Rabbits, Catch None”) or interbred with a fabliau, resulting in a story that seems a madcap forerunner of veering, careering romps like Waugh’s Vile Bodies.

There but for the grace of Sakhalin Island might Chekhov and all his considerable literary progeny have gone.